‘AMC Is A Ticking Time Bomb’, Seeking Alpha’s article headline yells. Not quite as dire, but it does raise some pertinent questions about AMC’s long term financing. No mention of the summer slate of 2015 but just a penetrating look at the underlying profit, margin, borrowing, yield and re-financing numbers.

So why are investors willing to pay 22x Forward PE? Is the growth potential really that strong? Revenues has not indicated so. AMC’s profitability is not exactly very decent either – the company earned 2% net income margin for the H1 2014 compared to 3.8% a year ago. What about RGC? Same story.

A large portion of AMC’s earnings is actually paid to debt holders. AMC paid $57.6m in interest expenses compared to its net income of $26.9m during the first half of 2014.

And it is a hefty bill that shareholders have to foot.  LINK

Don’t forget though that AMC is 80% owned by Wanda, so whatever risks other shareholders are exposed to, Wanda carries four times that risk. So Wanda will not let AMC shares tank while it re-structures its planned IPO for Wanda’s Chinese cinema business, which may or may not take place in the US. 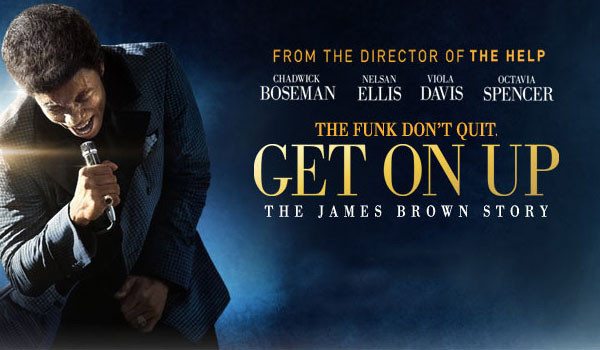 Universal has announced that it will henceforth support subtitling and audio description for all of its Hollywood releases in Germany.

Universal will provide cinemas in Germany with international films with subtitles and audio description in future. The first will be the James Brown biopic “Get On Up” on October 9. As stated in a press release co-authored with providers of the app Greta & Stark, this access will be provided for five new Universal releases, with subtitles and audio description in cinemas available in combination with this free smartphone app. In addition to “Get On Up”, these are the Stephen Hawking-biopic “The Theory of Everything”, “In The Labyrinth of Silence”, “Trash” and “Alles ist Liebe” (“All is Love”).  LINK 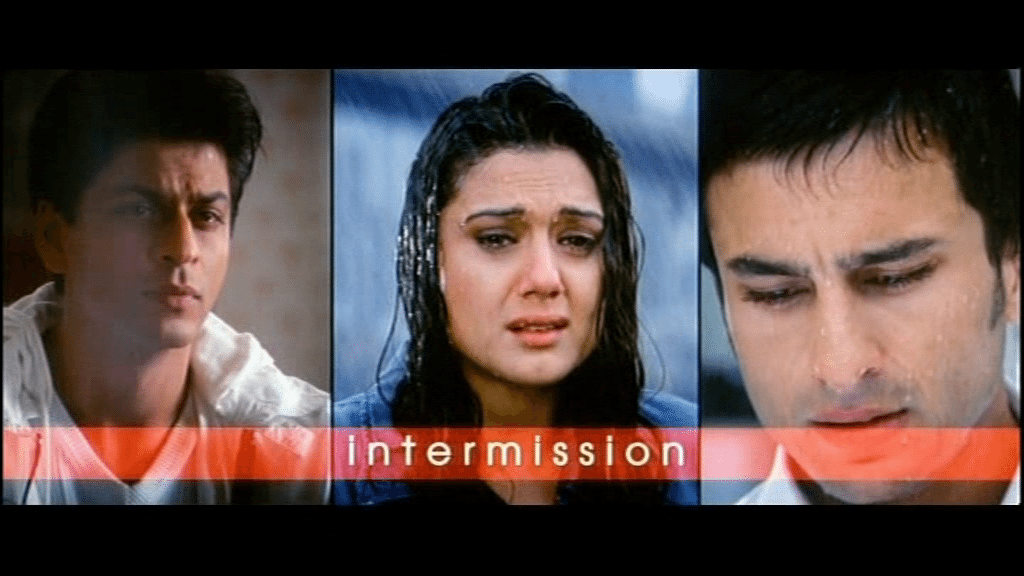 India – An American based in India questions the need for intermissions, the norm for both Hollywood and ‘Bollywood’ films, while giving a good historical, cineastic and economic-social context. The issue of intermission flags is not one I believe has been fully resolved by ISDCF (or maybe just not implemented).

I watched my first movie, How to Train Your Dragon 2, in Bengaluru at Forum Mall about two months ago. As an American, everything has been new in India, but this cinematic experience felt familiar as I sat in a comfortable chair absorbed by the on-screen action. Then the lights turned on abruptly. The screen image flickered and froze before turning green. I thought the projector had broken. But it was only an intermission, for a movie with a runtime less than two hours.

This practice of enacting mandatory intermissions annoys me. One reason I like watching films is the immersion effect; the concerns of my everyday life fade away as the lights dim. Arbitrary intermissions spoil the magic of cinema, and I cannot stand for it. Seriously, I sit sullenly with my arms crossed and fume.  LINK

USA (IL) – More luck on the liquor front second time around it seems. 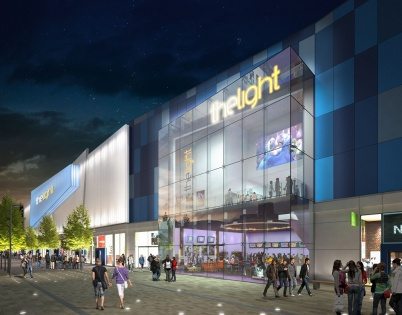 UK – The Light is revealed as the ‘anchor’ tenant of a GBP £65 million retail development in Stockport.

Stockport Council said it will submit a planning application for the revised Bridgefield leisure scheme this month, as it unveiled the anchor tenant, The Light Cinemas.

The Light, which operates at Neptune’s Marine Point in New Brighton and has an agreement in place to open in Bolton, will operate a new multiplex cinema at the 80,000 sq ft development on the site of the Bridgefield Street car park in Stockport town centre.  LINK 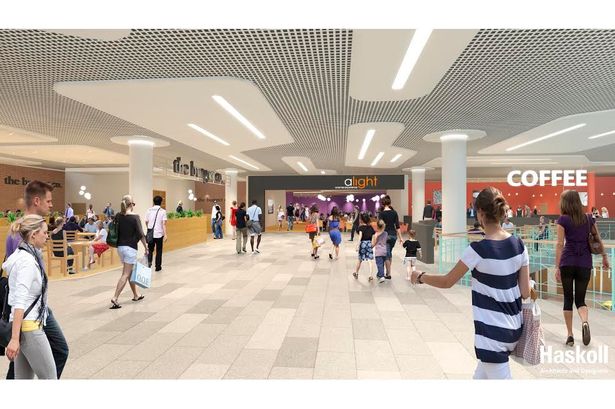 UK – Skelmersdale near Liverpool could be getting a seven-screen cinema as early as September 2015.

A vision of a multi-million pound makeover for Skelmersdale has been unveiled.

The plans include a multi-screen cinema as part of a new £4m leisure complex at Concourse Shopping Centre.

Centre bosses are working closely with an as-yet unnamed cinema operator to bring the 695-seat entertainment facility to the town.  LINK 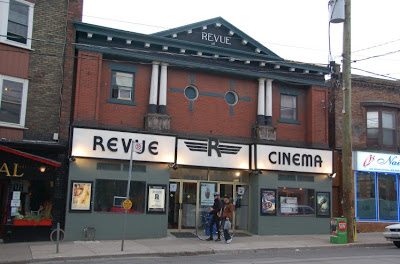 Canada (ON) – A thorough revamp for Toronto’s oldest cinema thanks to a generous grant.

The Revue Cinema is the recipient of an Ontario Trillium Foundation grant that will enable its operators to embark on a renovation project to revamp the century-old theatre.

The not-for-profit Revue Film Society was granted $125,300, its chair Mark Ellwood told The Villager in advance of an official announcement that will take place at the annual Roncesvalles Village Polish Festival, Saturday, Sept. 13.  LINK 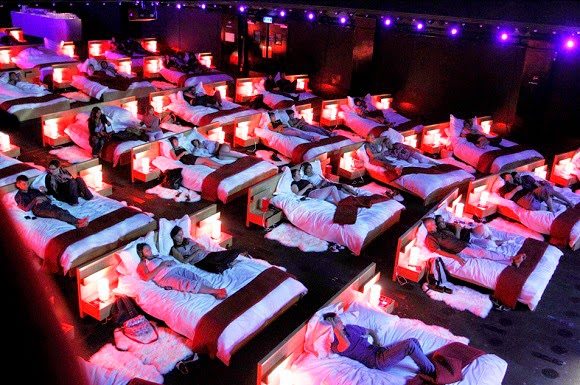 A luxury cinema that allows people to sleep through the blockbuster of their choice. This concept is so brilliant that I almost wish that it was real. (via Celluloid Liberation Front and The Pan-Arabia Enquirer)

Upon entering the CineSnooze fitted cinema screen, each guest will be taken to their own freshly made bed and given a warm mug of hot chocolate to help sooth them off to sleep. Earbuds and an eyemask will also be provided so the film doesn’t interrupt them throughout the entire experience.

“We found that so many of our customers choosing cushioned premium seats were falling asleep within minutes of sitting down, so thought we should cater to their unspoken demands, which in this case was for pocket sprung mattresses, 100 per cent Egyptian cotton sheets and Hungarian goose down pillows,” said Javier Ghent, regional manager at ArabCinePlex, which has been developing the technology.

But the real genius of CineSnooze comes into effect once the film has finished. Having been woken from their well-earned slumber, guests will sit down with a trained member of staff who will explain the film’s main story arc, central characters and plot themes, as well as providing details of essential quotes and scenes.  LINK

[There will most likely be no Daily tomorrow as I am spending the day travelling from Singapore to Amsterdam and stuck in transit at a Chinese airport for several hours – where wifi is unlikely – but there will be IBC Big Screen coverage aplenty after that.]
Follow me
Patrick von Sychowski
Editor at Celluloid Junkie
Patrick was a Senior Analyst at Screen Digest, went on to launch the digital cinema operations of Unique and Deluxe Europe, then digitised Bollywood at Adlabs/RMW, and now writes, consults and appears on panels about cinema all over the world.
Follow me
Latest posts by Patrick von Sychowski (see all)
Send this to a friend