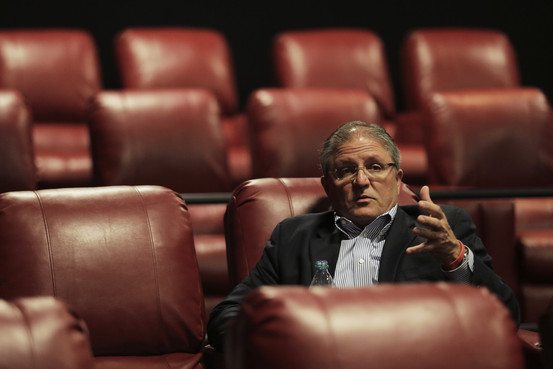 Today’s big news is AMC spending USD $600 million on upgrading its cinemas, primarily introducing bigger and more comfortable seats. The strategy has been flagged before but now everyone is following. It is effectively an admission of defeat in terms of ever hoping that attendance figures will improve. Now it is about extracting as much revenue from the few people that still go to the cinemas (NB: though attendance is up in the renovated screens, but unlikely to boost overall national figures). WSJ has a good analysis:

The nation’s second-largest movie theater chain is spending hundreds of millions of dollars outfitting a number of theaters with La-Z-Boy-type seats that fully recline—a conversion that removes up to two-thirds of a given auditorium’s seating capacity. It’s a less-is-more approach to a business that has long thought bigger was better.

But AMC’s counterintuitive success with the program has converted skeptical competitors and become integral to the company’s pitch to new investors.

The conversions are AMC’s highest-profile campaign since it was purchased for $2.6 billion by China-based Dalian Wanda Group Corp. in 2012 and went public last December. The company plans to spend about $600 million over the next five years to “reseat” 1,800 of its nearly 5,000 screens. The renovations typically cost $350,000 to $500,000 per auditorium, with landlords often shouldering some of the cost. LINK

The WSJ blog also has a good point that you wio’t be finding this in the biggest cities (NYC and LA) as rent is too high already.

The conversions highlight a liability facing the country’s biggest film exhibitors: a supply of outdated theaters that rarely sell out, yet would be costly to tear down and rebuild.

Attendance in renovated AMC auditoriums has leapt 80%, on average, despite the drastic reduction in capacity to sometimes fewer than 70 seats. The company declined to say what the average before-and-after attendance numbers were, though Mr. Lopez acknowledged that the biggest attendance boosts would come in theaters that were weak performers, some of which were losing money. LINK

Argentina: As the World Cup approaches its conclusion, one country is going all out to show the key game on the big screen. No, not the UK, but rather its old foe Argentina in their game against Germany tonight.

Over 100,000 people across Argentina have watched their national team compete in the 2014 World Cup at movie halls, which broadcast the games.

The National Cinema and Visual Arts Institute (INCAA) said in a statement that it has made 38 movie halls available for screenings of national team matches, featuring star footballer Lionel Messi, Xinhua reported.
Argentina Saturday defeated Belgium 1-0 to advance to the semifinals against the Netherlands in Sao Paulo Wednesday. The two nations haven’t disputed a World Cup semifinal since the 1990 edition in Italy. LINK.

UK: Secret Cinema is gearing up for its Back to the Future spectacular with the launch of concept stores in London’s trendy East End.

Secret Cinema presents Back to the Future announces the Grand reopening of the ‘Hill Valley Stores’ pop-up store to the public on Friday 11th July on East London’s Hackney Road.

The Hill Valley Stores will include Ruth’s Frock Shop and Roy’s Records, 1950s fashion and vinyl stock, sourced to give ticket holders and the general public a first glimpse into the world of Secret Cinema presents Back to the Future and a chance to shop for vintage costumes ahead of the event, which runs from the 24th July until the 31st August. Ruth’s own staff will be at hand to provide fashion advice, and Ray is said to have the best taste in music this side of the Californian mountains. LINK

Turkey: Last year’s most successful outing on the big screen was not a feature film but a concert recording of a stand up comic performance. The article looks at the success of NT Live before focusing on the local success story.

In Turkey, similar initiatives have the potential to make money for theater companies and cinema managers alike. Just look at Cem Y?lmaz, Turkey’s most successful stand-up artist, who has directed films such as “A.R.O.G” and “Hokkabaz” to the delight of audiences (and to mixed reactions from critics). Recorded versions of his live performances have proved insanely successful at the box office. In 2013 Yilmaz’s curiously titled “CM101MMXI Fundamentals” was seen by no less than 3,771,866 people. A recorded version of his stand-up shows, the film offered 140 minutes of good jokes, and was ideal as weekend entertainment.

In 2012, the ticket prices for a Cem Y?lmaz performance in an Istanbul show ranged from TL 55 to TL 98. “CM101MMXI Fundamentals,” the film version, offered not only a cheaper experience (about TL 10) but also a more convenient one. After all, Cem Y?lmaz can’t be present in all cities of Turkey around the clock, like some sort of genie. LINK

USA: NCM has secured funding to complete its acquisition of Screenvision.

The Company received committed financing with certain existing NCM LLC revolving credit facility lenders for an aggregate $250 million term loan for the Screenvision merger. The Company previously announced its plans to merge with Screenvision for $375 million ($225 million in cash and $150 million in shares of NCM, Inc. common stock). The NCM, Inc. term loan is expected to finance the $225 million portion of the merger consideration that will be paid in cash, along with fees and expenses incurred in connection with the term loan and merger. The merger is subject to regulatory approvals and the satisfaction of other customary closing conditions. LINK

USA (SD): More stories of the last cinema in town/region to switch to digital. This one in Sioux Fall

West Mall 7 Theatre will have its final showing of a movie on film on Wednesday or Thursday night as the business completes its transition to digital cinema projectors.

The theater’s 35 mm film projectors are the last remaining commercial ones in Sioux Falls.
In addition to the Sony 4K digital cinema projectors, the auditoriums are getting digital surround sound systems and new screens. LINK and LINK

USA (MD): Cinemark is opening a 15 screen multiplex in a suburb to Baltimore.

Featuring 30-foot screens, an arcade, stadium seating and a VIP lounge serving food and alcohol, the theater will replace Cinemark’s Dallas location as the international flagship of the company’s 486 locations. It also features one Extreme Digital Cinema, which is similar to IMAX technology and features more than 40 JBL speakers spread throughout the walls and ceiling. LINK

USA (AK): A very northern screen this one.

The new movie theater in Bethel lit up its screens last week on Independence Day. It was the grand opening for Suurvik Cinema, the only theatre for hundreds of miles in a vast stretch of Alaska.

A long line of excited moviegoers are ready for the first big screen viewings in Bethel for over thirty years. Bethel resident Ronald Jennings Jr. says it’s a big deal for him. LINK 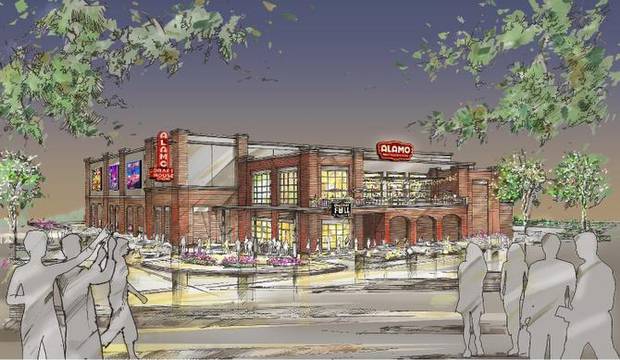 Downtown Dallas will once again have a nearby movie theater when an Alamo Drafthouse opens next summer in the Cedars neighborhood.
The two-story multiplex will be the first in or around downtown since a 10-screen theater in the West End went dark in 2000. It will have eight screens and seat around 1,000 moviegoers in a new building on the southwest corner of Cadiz and South Lamar streets.

“Downtown is coming back to life, and this is another indication of that,” said Jack Matthews, whose company Matthews Southwest will build and own the theater. LINK

What rarely occurs, at least in the Sacramento region, is what’s happening with Woodland’s State. In June, the City Council approved a plan to incorporate the building into a 10-screen multiplex, capping years of discussion about what to do with the theater at 322 Main St. The city, which owns the building, entered a disposition and development deal with Petaluma theater company Cinema West, pledging $2.75 million, over 10 years, to the $9 million to $10 million project.

The plan would respect the building’s art deco sweep and restore its neon signage, but also offer the latest in cinema-going, including recliner chairs and tables to hold food and beer and wine from an in-house restaurant. The goal is to transform the State into a memory-preserver that’s also a going concern. LINK

USA (FL): A change of ownership for this cinema. And a digital upgrade.

All four theaters will be upgraded with digital projection equipment and stereo sound. The theaters will continue to feature art and independent films, but will also expand its showings to feature first-run and family-oriented entertainment as well.
Jordan, a classically trained chef, plans to expand concession-and-beverage offerings. LINK

Let’s hear it for cinema organs.

Circle Cinema opened in 1928, with a location at Admiral Drive and Lewis Avenue that made it Tulsa’s first “suburban” theater not located in downtown.
Like other moviehouses of the silent-film era, the Circle featured a theater pipe organ for accompaniment.

As the phenomenon of “talking pictures” spread across the country by 1930, the Circle’s organ was soon silenced.

By 1931 this wind instrument, a uniquely American invention, was gone from the Circle. As technology improved over the decades and Circle Cinema went through its own plethora of changes, there was no reason to believe the pipe organ would ever return.

That all changes next week, in time for the art-house theater to celebrate its 86th birthday, when the organ that has been restored and reinstalled will fill the building with the sounds of a big-band orchestra’s worth of instruments. LINK