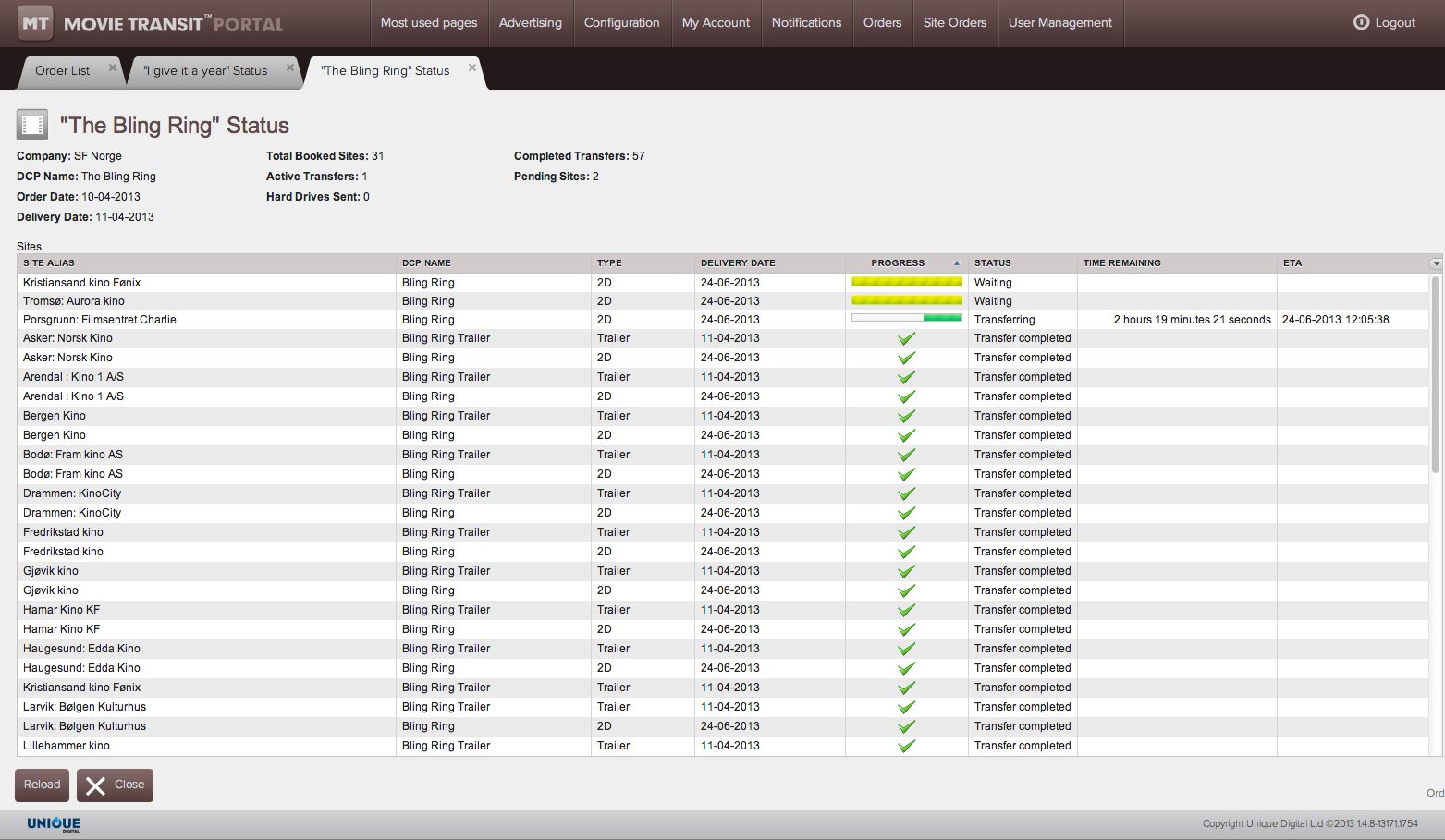 While satellite delivery was the talk of CinemaCon 2014, Unique Digital notched up two significant victories in Europe that point to fibre delivery playing a greater role for digital cinema in Europe.

The deals with UK’s BT and The Danish Distributors Association (FAFID) for Unique’s MovieTransit system also cement the company’s digital cinema service credentials in its two core markets of Scandinavia and the British Isles.

Unique Digital was selected by Denmark’s FAFID after a long evaluation and tender process to deliver DCPs to cinemas using its MovieTransit system. Quoted in the press release:

“Among the reasons we chose to use Unique’s services are their flexibility, the ease of use of the system, and its robust, tried & tested approach to content delivery. We are extremely happy to be able to offer the Danish market with this secure and flexible solution” says Dorte Wiedemann the Head of Secretariat

The agreement will grant all Danish Cinemas, including Greenland and the Faroe Islands, access to Unique Digital’s world leading solution MovieTransit™ which when launched in Norway in 2012 was the first terrestrial electronic distribution system for feature films to be deployed across an entire territory.

The selection of the fellow Scandinavian solutions provider was not a foregone conclusion as Unique had initially lost out in the race to digitise Denmark’s cinema advertising operation to a smaller competitor five years ago – though it won the Danes over last year.

At nearly the same time Unique announced that it had signed a multi-million pound deal with BT (British Telecom) for the first ever broadband distribution of DCPs to UK cinemas. According to the press release:

The network will enable content to be streamed to cinemas via static IP addresses, and the cinemas will then store the content ready to be screened to audiences. This will allow Unique to move advertising, film and alternative content on a point to point basis, allowing dynamic programming and reporting to all cinemas in the UK.

The deal was to be expected after Unique had previously announced that it had secured a contract with UK/Europe’s largest cinema chain Odeon-UCI  to roll out its MovieTransit broadband IP distribution system to all Odeon locations sites in the UK and Ireland .  In order to execute the agreement Unique needed an infrastructure partner and looks like BT was the best partner, with the company previously having flirted with digital cinema involvement over many years.

While Unique supplied the advertising management system and delivers playlists to Digital Cinema Media (co-owned by Odeon and Cineworld, but also supplying Vue), DCM was handling the delivery of the ads itself. To thus go straight up to the level of delivering of ads, trailers and DCP is a major step up, though it had already plenty of experience in Norway and other Scandinavian markets.

Asked by Celluloid Junkie to comment on the significance of this expansion, Unique’s head of Client Development, Mark Stephens, observed that “logic dictates that moving from a physical medium (35mm) to a digital medium (DCP) suggests a digital delivery of assets is more logical, extending that logic – why deliver everything to everywhere (satellite), just deliver what is needed by whom to where they need it (terrestrial).”

BT Business seems like an optimal fit for Unique’s MovieTransit solution that is already operating in Scandinavia and Ireland:

MovieTransit™, Unique’s market leading content distribution solution, has been fully operational to all cinemas in Norway for over 18 months, and many more sites in Denmark, Sweden and Ireland. In that time over 100,000 film and advertising packages (over 15 PetaBytes of data in total) have been delivered.

What will be interesting to see is which other cinema operators sign up to this solution. Both Vue and Cineworld also gets ads in digital from DCM, which uses Uniques’ management system, but have not signed up to MovieTransit, with Vue having committed to Arqiva’s digital cinema delivery over satellite solution. MovieTransit roll-out is financially underpinned by an agreement with Atea that Unique signed last October:

This partnership with the largest system integrator vendor Atea provides Unique with financial solutions for an accelerated roll out of MovieTransitTM to over 5,000 cinemas
internationally. The first 600 units have already been deployed in Europe and are either fully operational or in trial. A further 600 will be deployed over the next 8 weeks.

Europe as a whole presents a challenge when it comes to DCP delivery. Not only are there multiple version of films with different language tracks, subtitles, censor cuts and inserts that need to be sent to different territories, but film tend not to have uniform release dates even. In this situation satellite is not the same obvious solution as it is in North America, where films go out all across the United States (and Canada) in the same version on the same day.

There are multiple digital cinema distribution solution providers and vendors already in Europe.

Leaving aside hard-drives, some notable ones are:

It seem clear that no one operator will dominate the market, the way the DCDC looks set to do after its acquisition of the Deluxe-Echostar solution.

Fibre/IP delivery is optimal for countries with high broadband infrastructure connectivity, such as Scandinavia and Benelux or countries with a high degree of multiplex consolidation such as UK, Spain and Poland.

Markets with a fragmented cinema sector like Italy will be a challenge for any solution provider, but it is clear that the tide is shifting away from distributing DCPs on hard drives.

[Full disclosure: I used to work for Unique Digital many years ago. They still sometimes buy me a drink.]
Follow me
Patrick von Sychowski
Editor at Celluloid Junkie
Patrick was a Senior Analyst at Screen Digest, went on to launch the digital cinema operations of Unique and Deluxe Europe, then digitised Bollywood at Adlabs/RMW, and now writes, consults and appears on panels about cinema all over the world.
Follow me
Latest posts by Patrick von Sychowski (see all)
Send this to a friend