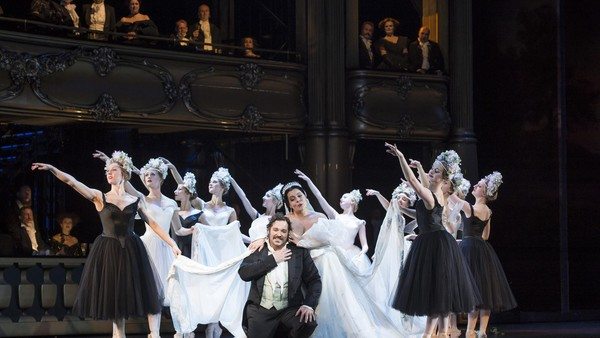 UK’s Royal Opera House (ROH) has announced its programme for the 2014/15 Season and with it the astonishing revelation that it expects its cinema audience numbers to overtake those watching it in person at its Covent Garden home this season.

Despite ROH selling out 96% of all tickets to its Covent Garden performances, the Live Cinema Season is thus expected to outperform that 607,000 who attend Covent Garden annually.

The news comes at a critical time for ROH as the venerable institution changes head, with Alex Beard replacing Sir Tony Hall, who accepted the post of Director General of the BBC.  Government funding now consists of less than a quarter of ROH’s £110m budget and event cinema is one of the institution’s new “imaginative ways” to increase revenue.

Quoted in the Financial Times:

Mr Beard said Covent Garden’s open-house policies had dispelled the notion that it was the preserve of a socially exclusive audience. “I don’t subscribe to democratising art but I do believe in democratising access, by opening up the institution to transformative experiences.

“We have increased the number of ways that people can experience what we do, and they represent great value.”

This message was reiterated in The Telegraph:

“This is our broadest and strongest cinema programme yet. For the first time, cinema attendances will outstrip attendances at Covent Garden,” said Alex Beard, the ROH chief executive.

“The majority of our cinema-goers have been to a live performance, but a significant minority are new to the form. It is an amazing way to reach an audience beyond the Opera House.”

While the Live Cinema Season revenue is split with the exhibitors and incurs the cost of production, it will still make a significant contribution. With the price at Cineworld for ROH tickets spanning GBP £10-£18 a median price of £15 multiplied by 600,000 attendees gives GBP £9 million. At a conservative estimate, event cinema thus contributes around 5% to ROH coffers, i.e. small but significant.

According to the FT (again):

Live cinema relays of 11 productions will reach 400 venues across the UK and another 1,100 worldwide. The Royal Opera House is also investing in family days, schools matinees and community ensembles.

These latter are unlikely to have much an impact on the bottom line, but help justify what public subsidies remain for the ROH.

Measuring Up Against the Met

The figures are all the more impressive when considering that ROH operas is often restricted in playing in cinemas that do not show the Metropolitan opera from New York. This is because of non-compete clauses that prevent some cinemas from showing two competing opera seasons at the same time to prevent saturation.

However, a cinema that plays Met Operas can still show ballet and dance from the ROH/Covent Garden. Tellingly, The Royal Ballet’s The Nutcracker was ROH’s most popular ever cinemas show, with 129,000 seeing it last Christmas. The non-compete is also slowly going away, with the likes of Cineworld showing both Met, ROH and Glyndebourne.

Contacted by Celluloid Junkie, the Event Cinema Association‘s head Melissa Keeping commented that, “it’s testament to the hard work of the team at the Royal Opera House that they’ve achieved such impressive numbers and a more general sign that event cinema is becoming a more established component of exhibition worldwide. Bringing the arts to multiplexes and art house cinemas can only be a good thing and a welcome sign that the appetite for opera as an art form continues to grow. Congratulations to the ROH for a job well done.”

While the ROH has been playing catch-up with the Met, it has thus come a long way on just five years. When it launched in 2009 it went out to just 45 cinemas.

[youtube]http://youtu.be/CbEiSmxaDhQ[/youtube]
Follow me
Patrick von Sychowski
Editor at Celluloid Junkie
Patrick was a Senior Analyst at Screen Digest, went on to launch the digital cinema operations of Unique and Deluxe Europe, then digitised Bollywood at Adlabs/RMW, and now writes, consults and appears on panels about cinema all over the world.
Follow me
Latest posts by Patrick von Sychowski (see all)
Send this to a friend