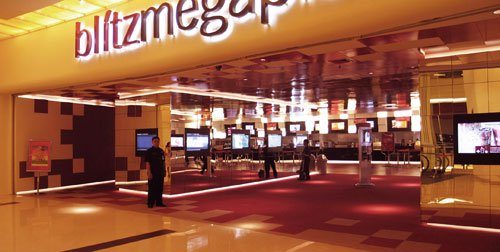 Having mentioned India and China as the interesting and important (respectively) Asian cinema territories in the last two Dailies, the time now comes to The One to Watch: Indonesia. South-East Asia’s most populous country is severely under-screened following decades of nepotistic governmental control of the cinema market. This is about to change with a challenge from more than one operators.

Graha Layar, which owns the Blitzmegaplex cinema chain, set a price range of 2,800-3,300 rupiah per share. The firm has appointed Indo Premier Securities as underwriter.

The company also entered a debt-to-equity conversion deal with South Korea’s CJ CGV Co Ltd for as much as 200 million shares.  LINK

Graha Layar is planning to build seven cinemas in Indonesia by 2015 and Blitzmegaplex is already the country’s second-biggest cinema chain after 21 Cineplex.

UAE: An even more impressive expansion plan in the Gulf, with Dubai-based shopping mall developer Majid Al Futtaim set to  invest over 750 million dirhams (USD $204 million) to expand its VOX Cinema operations in the Middle East, with an aim of doubling its audience figures by 2016.

In the United Arab Emirates, his company will spend 275 million dirhams revamping and expanding its Dubai operations, plus a further 290 million dirhams in neighbouring emirates Abu Dhabi and Sharjah.

“The budget for our Egyptian cinemas is yet to be finalised,” said Mitchell.  LINK

Russia: From the country that is about to annex Crimea, a case of free-speech also trampled on in cinemas.

The Novosibirsk office had announced that it would fine movie theaters for showing the Hollywood hit, starring Leonardo Di Caprio, for promoting drug use. However, there has been no decision yet to remove the movie from distribution. The head of the Federal Drug Control Service, Viktor Ivanov, told journalists that no instructions had been given to the local office.  LINK

UK (Wales): Volunteers are sought to help run a cinema in north-east Wales.

Volunteers are being asked to play a big part in keeping a community cinema and arts centre open in Denbighshire.

Three out of the four full-time members of staff at the Scala in Prestatyn have been made redundant to cut costs.

Denbighshire County Council which part-funds the complex had warned that the operation had to be more cost-effective if its subsidy was to continue.  LINK

Nigeria: Want to know how challenging it is to run cinemas in Africa? Hear this first hand account.

How challenging is it to run a cinema business in Nigeria?

It is very challenging; the biggest challenge being skilled personnel. Cinema is new in Nigeria and there are not a lot of unskilled people. What we did was to attract Nigerians who were into cinema and were at the time working at Odeon. I doubt Odeon is very happy with me about this. We also got some technical people from Warner Bros Cinema who actually run the projectors. The digital set up, we got a Nigerian expert from Odeon and an architect who is Nigerian, but was at Warner Bros.

I was one of those who wrote the Odeon Training Manual for management. We got management operators; it was important for me to get these skills in en masse and then replicate it. Our big job is a succession planning because we are opening so many cinemas at the same time, we have to work double hard. Something which others will achieve in three years we want to achieve in nine months.  LINK

India: PVR has seen a minor bull run  on its shares. Time to switch from ‘Buy’ to ‘Hold’?

PVR, one of the largest multiplex operators in the country, has managed to have audiences thronging its halls and has also been able to raise its ticket prices.

Since the ‘buy’ recommendation last August, the stock has run up 45 per cent.

While the company’s business prospects remain quite robust, the stock’s valuation now seems a tad expensive. At ?514, the PVR stock trades at 20 times its likely per share earnings for 2014-15. Given the good business prospects but high valuation multiple at which the stock trades, investors can retain their holdings. Further exposure can be considered on declines linked to the broader market.  LINK

India:  Cinemas in (southern) India are accused of excess entry fee over and above the approved rates of admission.

Excess entry fee collection is done through various modus operandi by a section of the theatres. While some of the theatres resort to issue of tokens without mentioning the entry fee (these tokens are exchanged with tickets, when the movie goer gets into the cinema), another section resorts to collection of excess entry fee in the form of Internet and handling charges ranging from 15 per cent to even 54 per cent.

According to Secretary of Coimbatore Consumer Cause K. Kathirmathiyon, after the withdrawal of the entertainment tax, cinema theatres were permitted by the State Government to collect Rs. 50, 40, 25 and Rs. 15 for AC theatres in corporation, municipalities, town panchayat and village panchayats respectively. For non-AC theatres, rates of admission were fixed at Rs 30, 20 and Rs 10.  LINK

Myanmar (Burma): In the absence of either digital or celluloid, Myanmar’s cinemas are being swallowed by property developers.

Of the 20 military rule-era cinemas that once existed throughout the city, half have been shut down or demolished, while others yet have begun building condominiums and retail space, where cinemas once stood.

“We can’t make enough profit from the theatre anymore. That’s why cinema owners are building condos,” said U Thet, a manager at Shwe Man Cinema.

“Years ago, our cinema had 900 seats and regularly filled them all, but for the past 10 or 15 years the house was rarely larger than 200 to 300,” he said, adding that many cinemas in town are unable to pay for the necessary equipment to upgrade the outdated facilities.  LINK

UK: A publicly supported cinema in Leamington Spa’s Spa Centre complex has been upgraded to digital.

The seeds of a £40,000 investment in the Spa Centre’s cinema in Leamington will bear fruit as screenings on the upgraded system are re-launched next weekend.

American comedy drama Inside Llewyn Davis will be the first film to hit the new big screen at the council taxpayer-subsidised venue, which has spent the money on a new digital projector, higher quality sound system, improved high definition picture quality and the ability to stream live satellite events and 3D films.  LINK

UK (Guernsey): The only leisure centre on the Channel Island of Guernsey could could see a cinema again soon.

The Culture and Leisure Department has gone to tender to find a cinema operator, looking for expressions of interest to run a cinema in the theatre at the Leisure Centre again.

There haven’t been any films shown at the Leisure Centre since 2001, because at the time it wasn’t considered to be a sustainable business model – but with advances in technology that may have changed.  LINK

Celebrate the history of the un-sungs heroines of the Golden Age of Cinema: the usherettes. This exhibition at the University of Portsmouth should be well worth the visit.

Glamorous, welcoming, stylishly attired – the usherette was once an integral part of the cinema experience. Immortalised as symbols of fantasy and desire, they are fondly remembered for lighting the way to a world of dreams.

Over the past two decades, Eva Balogh has been researching the history of the cinema usherette, and one of the most important contributions to this research was the interviews she conducted with several women who had worked as cinema usherettes in Portsmouth during the 1930s and 1940s. This month, staff and students at the University of Portsmouth honour them with a new exhibition.