“Cine Grand BV, Netherlands based Cinema Exhibition company announced their collaboration with the Beijing based Time Antaeus Group,” said the press release as did all the articles regurgitating it. The release went on to say that there is a joint plan to open over 500 screens in China over the next three years. So what is a Dutch cinema chain doing partnering a Chinese exhibitor? The answer is that it isn’t.

Do a search for Cine Grand BV online and you primarily find the press release/news articles related to the Time Antaeus announcement. Grand Cinema BV does not operate a single screen in The Netherlands, but the company is registered there (Herikerbergweg 238, Luna ArenA, 1101 CM NL-23393 Amsterdam – around the corner from Dolby International AB). A detailed search reveals that Cine Grand BV used to be registered as Inspire Multiplex B.V. (Company Number 53220188 – Strawinskylaan 3105, Atrium Amsterdam NL 1077 ZX – the business district of Amsterdam Zuid) and owns couple of trademarks in the country, including Cine Grand Class (above) and My Cinema (below), both of which have “Filing Language” stated as ‘Romanian’.

This is explained by a third trademark filing for TSAR Luxury Lounge and Cinema. This filing was done by Biris Goran, a Romanian lawyer heading an eponymous lawfirm that defended RoGroup in a 15 million euro tax case against the Romanian Customs Office and the Ministry of Finance. His/their firm is also listed as:

Cine Grand currently operates one five-screen cinema in Romania and two cinemas in Bulgaria in Burgas and Sofia with a total of 14 screens. Having established a toehold in Eastern Europe, Variety writes, “Nirmal Anand, chairman of Cine Grand, said that they plan to open 500 screens in China over the next three years… Cine Grand currently has four screens in Ahmedabad, India. A complex with a further four is under construction in Gurgaon.” The press release also calls Mr. Anand a “pioneer in exhibition business in the Middle East & Eastern Europe.” 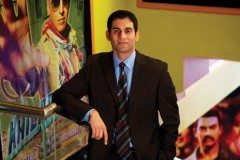 A deeper search does indeed turn up a Middle Eastern connection.  A non-descript article from March 2013 about Indian digital cinema company Scrabble Entertainment writes: “Scrabble customer Karan Anand (pictured) and his father Nirmal Anand are the father-son owners of Al Nisr Cinemas, which owns and manages dozens of screens throughout the Middle East region.”

Through the pioneering efforts of our Dubai business head Mr. Nirmal Anand; it is possible to avail of dubbing and retail sales for audio and video software (UAE); exhibit at operating theatres in UAE; access expertise in design, construction and operation system creation for Multiplex Entertainment Cinemas (UAE, China) and discover the only digital lab in the middle east. To summarize our interests, we cover all aspects of film business; acquisition, production, distribution, exhibition and restoration of full-length feature films and documentaries; as well as production of television serials & short format films.

So Anand Jr & Sr are established in the Gulf. While the article claims that they own and manages “dozens of screens throughout Middle East” I can only find the one, Grand Al Nisr Cinema in Century Mall (Al Faseel Rd E99, Fujairah), so I assume they handle Bollywood programming for other cinemas, which would also explain their tie-up with Scrabble.

In India we learn from one article about the deal that “the group has 4 functioning screens in Ahmedabad. In addition 4 screens are being opened in Gurgaon by the end of the month.” An article in Business Standard from 2012 says that the company received INR 250 million (USD $4 million) from “an Indian angel investor”. So the company owns and operates six cinema properties across four countries with just over two dozen screens (that we can identify).

So what about Time Antaeus? According to DCinemaToday, it is “a specialist in the cinema industry and currently has over 130 theatres and over 1,000 screens in mainland China.” It is worth remembering the last time that Time Antaeus was in the news, in the summer of 2009:

This marks the country’s most extensive commercial effort to install 800 Christie CP2000 series DLP Cinema projectors in select cinemas by the end of 2010. These projectors will be installed together with 800 Time Antaeus Montage CDCS2000 D-Cinema Servers.

So Time Antaeus is a digital cinema server manufacturer? Not quite. From an article from that same year (2009):

Doremi Cinema has announced progress in its partnership with Time Antaeus Media Group in China for its major digital cinema deployment in Mainland China. The 1000 screen commitment started late last year. The companies expect the deployment to be completed in July 2010.  As part of the arrangement Time Antaeus’ Montage CDCS2000 D-Cinema Server manufactured by Doremi is being deployed as part of their digital cinema solution.

Time Antaeus thus started out as a digital cinema integrator. So if the numbers add up, it means that Time Antaeus digital cinema deployment is confined to its own cinemas, unless there is more that they have not announced. This would indicate that it has changed focus from third-party integrator, to pure cinema operator. 1,000 screens is not a small number, but in the PRC it is still not enough to place you in the top ten – it currently places 12th in the China cinema circuit.

Given these previous deployments, how likely is it that Grand Cinema will grow Time Antaeus’ screen-count by 50% in the next three years?

Without wishing to dampen the enthusiasm for an exhibitor that has clearly built some fine looking cinemas, it is worth noting that we have been here before.

In an article in Business Line from January 2012, Inspire Multiplex (as Cine Grand was then still called), claimed it had “set a target of 300 screens by 2013.” At the start of 2014 it seems to have achieved just over 10% of that target. The article goes on, “Beside India, where 30 to 40 per cent of the screens are expected to be launched, Europe, Africa and the US have been identified as key markets.” No mention of China while Africa and US seem to have been dropped from the plans.

It would not be the first time an exhibitor has changed plans or had to scale back ambitions. Aiming to provide “state-of-the-art entertainment” while selling tickets for as little as INR 25 (USD 50 cents) is not easy, or others would already do it. But it does mean that announcements and press releases should not be taken and reported at face value, which is all too often the case with today’s churnalism.

So why is Cine Grand BV registered in the Netherlands? Maybe Mr Anand is a fan of tulips, clogs and cheese. Or maybe there is a different reason.

As The Guardian reported in 2011, “The Netherlands is making a name for itself as the new home of the art of cutting corporate tax bills.” Not only do such un-Dutch companies as BP Pipelines Vietnam BV and Amoco Chemical Malaysia Holding BV call it their (corporate) ‘home’, but so does Irish rock band U2. So is The Netherlands a corporate flag of convenience for Cine Grand BV as it charts the choppy waters of international exhibition?

If it is then Cine Grand wouldn’t be the first exhibitor with operations and subsidiaries in many countries to have a post-office box HQ in The Netherlands. In fact, they are in good company with Cineworld’s recent merger partner Cinema City International. The company is also active in Central and Eastern Europe, with a listing on the Warsaw stock exchange. But the registered office is Weena 210-212, 3012 NJ Rotterdam, The Netherlands.

“The Netherlands is an increasingly attractive location for multinationals to place holding companies, because of the tax treaties it has with over 100 countries. Along with these come the Netherlands’s famous participation exemption [exemption from taxation for a shareholder in a company on dividends received, and potential capital gains arising on the sale of shares], the absence of withholding [source] taxes on interest and royalties, the possibility of being able to conclude tax rulings [before paying tax], the use of legal co-operation and the so-called innovation box, a special fiscal arrangement designed for research and development.”

Perhaps the Dubai-based Anand père et fils may have something to worry about since last week the Indian Income Tax department rebutted Vodafone’s notice under the Bilateral Investment Promotion and Protection Agreement (BIPA), “saying that the pact between India and Netherlands does not cover taxation issues.” The Vodafone deal is much bigger than a small Indian exhibitor opening screens in UAE, Bulgaria and Romania while claiming to be a Dutch corporate entity, but Indian tax authorities might suddenly get interested how the ‘Indian Angel investor’ funds are used for expansion in China while profits are remitted to Amsterdam. Pass the Gouda-flavoured popcorn please.