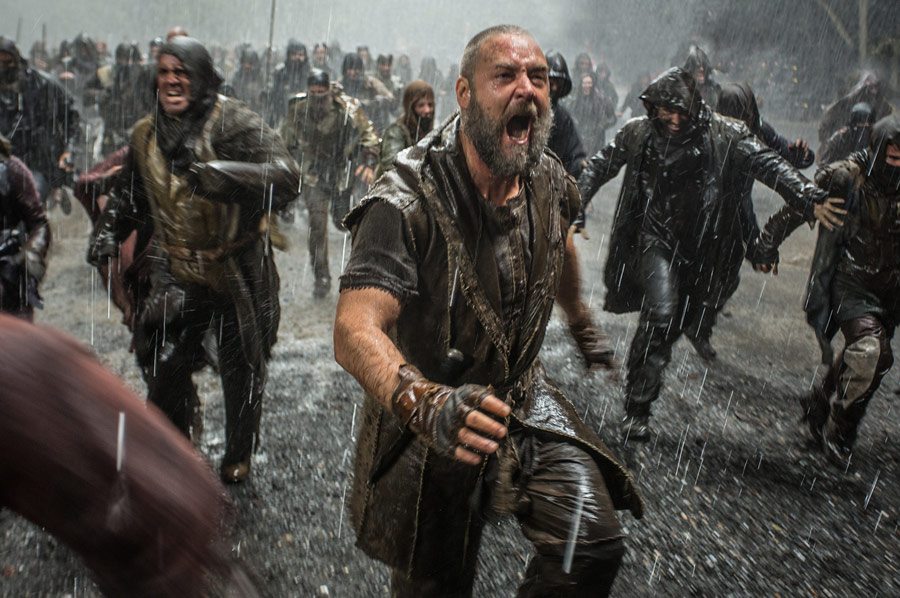 It seems like most film fans in the Middle East will not get to see Noah, as the film has been banned in several markets there.

CINEMA bosses in Bahrain have supported a decision not to show a movie depicting the Christian version of Noah’s Ark, despite screening a trailer to filmgoers last week.

The $125 million Hollywood depiction of the Biblical tale has been banned in Bahrain, Qatar and the UAE on religious grounds ahead of its worldwide premiere in the US on March 28.

Several other Arab countries including Jordan, Egypt and Kuwait are also expected to follow suit.

The blockbuster, Noah, retells the story of the great flood from the Book of Genesis and was banned because it “contradicts the teachings of Islam”, according to a representative of Paramount Pictures – the studio behind the epic movie.  LINK

Shame, particularly after Paramount went through all that trouble to convert the film to 3D just for overseas audiences. 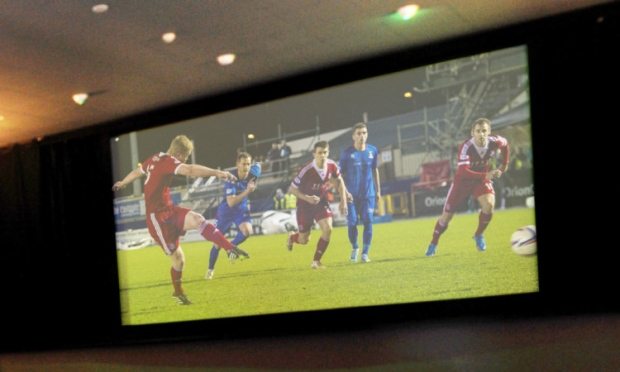 UK: Fans of one of Scotland’s lower-ranking football clubs will get a chance to see their team on the big screen after the allocated tickets for the League Cup Final in the stadium sold out.

Aberdeen FC’s first league cup final in 14 years will be shown at the Belmont Cinema.

A total of 260 free tickets were up for grabs today on a “first-come-first-served basis” to watch the Dons play Inverness CT in Glasgow.

Aberdeen City Council’s Finance, Policy and Resources Committee convener Willie Young said: “By working in partnership with the Belmont Cinema we are delighted to be able to offer young people an additional way to enjoy the Dons in the Scottish Cup Final.  LINK Rumble seats: Cinepolis has become the first client in India for South Korean 4DX technology in its Thane multiplex:

The sprawling 14 screen multiplex will be home to India’s first 4DXscreen apart from the usual 2D, 3D and IMAX screens. Cinepolis entered a deal with South Korean company CJ Group to use its 4DX technology in Cinepolis properties. The multiplex chain promoter invested $25 million in the deal and now has 17 4DX screens across Latin America.

4DXis a technology that allows movie goers sensory stimulation while watching the movie. This includes certain kinds of motion, effectslike bubbles, mist, smoke etc., and certain kins of smell. Any moviethat is available in 3D format can be converted to 4DX by incorporating a software onto the digital print of the movie in thepost-production phase.  LINK

USA: Calling in a bomb threat to a cinema is almost as bad as shouting ‘Fire!’ in a theatre. It does not go un-punished.

An Arkansas man will face a year in prison after making two bomb threat calls from Longview to Carmike Cinemas in August 2012 because he was upset rival cleaners used immigrant labor and could undercut his bids with the theater company. Prosecutors say 59-year-old Keith Bowers of Jessieville, Ark., was sentenced Feb. 25 to serve a year and a day in prison for making the threat.

Bowers pleaded guilty in December to making two calls from Longview to Carmike Cinema’s headquarters in Columbus, Ga. Prosecutors said Bowers used a “Hispanic accent” and said he was unhappy that Carmike underpaid immigrant workers for cleaning. He said he would detonate a bomb during a screening of “The Expendables.” LINK

India: A fire that started in a cinema hall in one of India’s poorest regions ended up killing a family living next door.

Five persons of a family, including two children, were today charred to death in a fire accident in East Godavari district of Andhra Pradesh.

The blaze started around 2 AM inside Durga Cinema hall at Dowleswaram village due to a short circuit, police said.

Soon the flames spread and engulfed the adjoining hutment, where the victims were fast asleep.  LINK

USA: Fancy buying a cinema complex in upstate New York? Be warned, you will need to upgrade it to digitla yourself.

The Buffalo Urban Renewal Agency is seeking proposals that continue the operation as a cinema and to continue local programming and film festivals such as the Buffalo Film Seminars, Buffalo Niagara Film Festival, WNY Black Film Fest and live theater performances. For the balance of the space, restaurant, retail, office, residential and arts/cultural uses are desirable. Preference shall be given to those proposals that (1) create and maintain an exciting, active atmosphere and will make an attractive destination, (2) enhance and complement existing and planned attractions of the Theatre District, (3) encourage daily patronage, and/or (4) generate economic development benefits.

DSC_0301General Cinema Theaters operated the heavily-subsidized eight-screen complex when it opened in 1987. It was General Cinema’s first new downtown theater in over a decade and ranked in the top 50 out of its 350 complexes shortly after opening. But after a strong opening, and attendance dwindling, General Cinema did not renew its lease and pulled out in 1998.  LINK Hong Kong: More details on the Kitec cinema that we reported on previously. It sounds and looks terrific.

The latest arrival on the local cinema landscape shows how this experience has evolved. Launched at the Kowloonbay International Trade and Exhibition Centre (Kitec) last month, The Metroplex is a nine-house, 1,100-seat multiplex that has Dolby Atmos immersive sound systems and state-of-the-art projection technology in all auditoriums.

Designed to be a venue for star-studded film festivals and premieres – it is a partner of this month’s Hong Kong International Film Festival – the multiplex also features three green rooms, and a shower stall for celebrities to freshen up.

The best seats at The Metroplex are in the three special VIP houses. These can be rented out for parties, each with a maximum capacity of 20 people. The purple leather, electrically powered seats recline fully, and the concession stand’s food and drinks offerings include truffle fries, panini, and alcohol.  LINK

USA: Good things are worth waiting for , including luxury cinemas.

It’s a little later than anticipated, but construction work has started on the new Cinebistro movie theater and restaurant at Cary’s Waverly Place shopping center, which is now slated to open in October.

When the owners of the Cinebistro movie chain announced in August plans to open in Cary, they had projected a second quarter opening, but delays in permitting and planning have pushed the opening into the fourth quarter.  LINK

UK: But luxury cinema in a pub? And is it legal to show DVDs in public? Or do they not charge tickets?

Film fans wanting to watch their favourite movie on the big screen can now take their own DVDs to Bristol’s newest luxury cinema where they will be able to sit back, relax and enjoy a full cinematic experience.

The ‘Bring Your Own’ night has been launched at The Director’s Cut, the new luxury, 26-seat cinema at Horts on Broad Street, Bristol and will take place on Tuesdays.

It means those wanting to see again the latest blockbuster, independent or film noir on a big screen can do so knowing they will get the same experience as if visiting a main stream cinema.  LINK 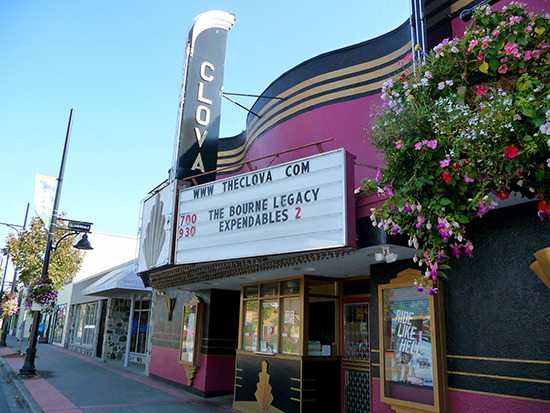 Canada: An Internet fundraising campaign was not enough to save this gem of an art-deco cinema, which is being taken over by a church.

The operator of the Clova Cinema announced Tuesday the family-run movie house will close, despite a push to raise money to convert to a digital projection system.

The building has been sold, and the new owners have told Clova Cinema operator Craig Burghardt “their plans for the building are not conducive to us running as a movie theatre.”

For their many loyal patrons and for movie fans who cling to the celluloid age, it’s devastating news.

An Art Deco-style gem on Main Street Cloverdale, the Clova theatre opened in 1947, and, apart from a decade-plus where the silver screen was silent until a re-boot as the Clova Cinema in 1992, has been thrilling successive generations of movie fans. Burghardt, a Lord Tweedsmuir Secondary grad, has been operating the Clova along with a tightly-knit crew known as the Clovamily since 1996.  LINK

A lesson in cinema etiquette from the Simpsons’ “Steal This Episode”:

[youtube]http://www.youtube.com/watch?v=N0Z6gZHIUQI[/youtube]
Follow me
Patrick von Sychowski
Editor at Celluloid Junkie
Patrick was a Senior Analyst at Screen Digest, went on to launch the digital cinema operations of Unique and Deluxe Europe, then digitised Bollywood at Adlabs/RMW, and now writes, consults and appears on panels about cinema all over the world.
Follow me
Latest posts by Patrick von Sychowski (see all)
Send this to a friend