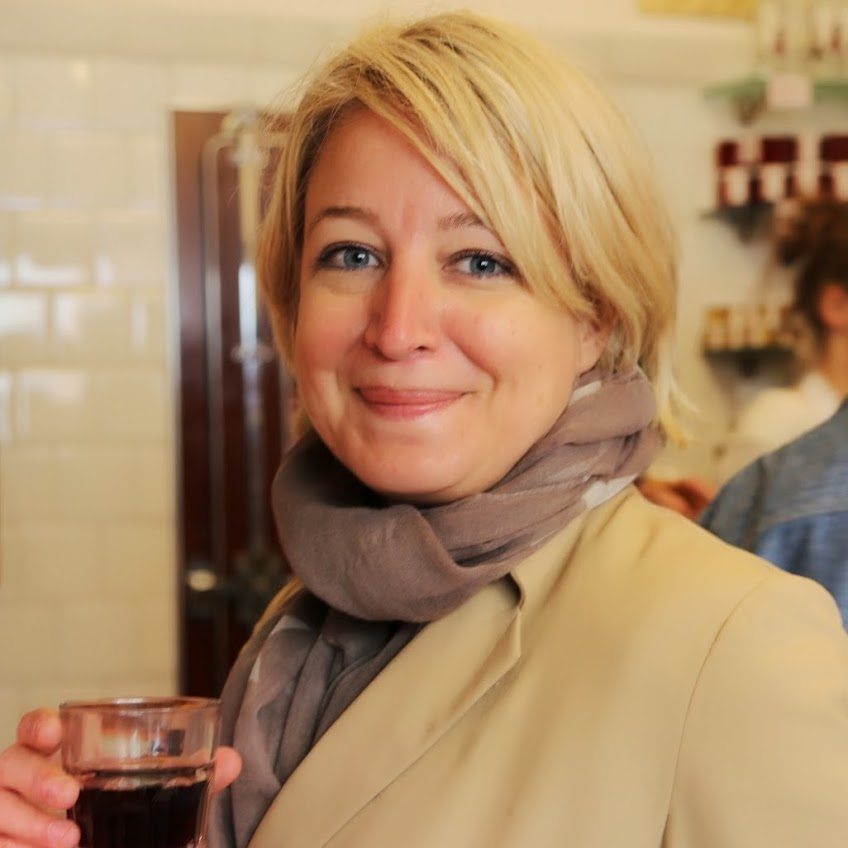 As both an ardent foodie and lover of film, this trend towards fine dining at the cinema, and I mean served right in your seat during the film, intrigued me. Quite often I find myself tempted to wait until a film hits Netflix so I can curl up on my couch with my favorite bowl of homemade whatever, but the big cinema chains have caught on to my routine and they’re now offering commodious seats, alcoholic beverages, and more than just your typical popcorn, nachos or a hot dog to choose from on the menu. There are independent theatres that have been doing a version of this for years now, luxe seating with lattes and macaroons or wood fired pizzas and wine served up in the lobby, but a full-on dining experience in the dark, how exactly would this work?

The Lounge at Whiteleys Odeon was a blustery but thankfully short walk from my home in West London, past the neat rows of homes, doors wide open as parents were desperately trying to decamp their families into waiting Black Cabs to take them to Heathrow, to somewhere warm or maybe snowy for half-term break. It was the perfect afternoon for a movie! Whiteleys itself is somewhere I’ve always tried to avoid, not understanding the need for a shopping mall in such a vibrant neighborhood, the surrounding streets crammed with independent shops and restaurants. Much like any shopping mall in the center of a city, I find it disheartening, the diffused sunlight, the chain shops and faux sidewalk cafes. However, most movie theatres are tucked away at the top of these soulless spaces, and so past the Zara, the Café Rouge, the mobile phone shops, the M&S Food, I strode.

When I booked my tickets online, they urge you to arrive 30 minutes before the start of your film to take advantage of the full “Lounge experience.” I did as they asked and sat sipping a cranberry juice while watching well-heeled couples settle into the plush seats surrounding the bar. We were to be a small group, well the theatre only seats 50 at most, and at these prices, GBP £18.50 (US $30)per ticket, not everyone will indulge. Just five minutes before the start time, we were ushered to our seats, wait staff carrying our drinks on trays like they do at the finest restaurants. 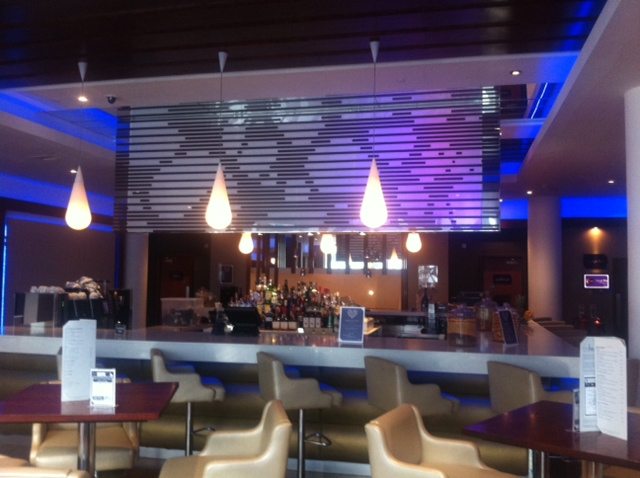 The seats are huge, reminiscent of the ones used in nail salons for pedicures (thankfully they don’t vibrate). A bright blue button on the arm of your chair can be pressed at any time to request a server come to you. On the other arm a small tray is attached and a menu awaits inspection. In honor of the recent Chinese New Year, there was a small selection of Dim Sum, and I thought I must indulge. Prawn and chive dumplings, if you please. The other dishes are divided into Finger, Fork, and Spoon categories. I decided to rely on my trusty fingers, thinking a fork banging on a plate might be just too much during the show. The hot dog, while tempting, was too close to what I might get at just any old theatre, lemon sole goujons too reminiscent of culinary school, sushi too dicey at this venue. I settled on the three fillet steak sliders with onion rings. We were still in the previews (I’ll most certainly be first in line to see The Grand Budapest Hotel) when all of my food arrived and a little wine chiller bucket was set up to hold my bottle of still water. Fancy, indeed!

Munching away, I painfully aware of how loud each bite of my crispy onion rings was (somehow, popcorn has never seemed this loud in a normal theatre). They were nice and crispy, their batter not too thick, but somehow it was like the onions inside were missing. The sliders themselves had lovely soft buns and the steak was tasty, tender, and cooked to the medium I requested, but were in desperate need of a sauce of some kind. I wondered if the chefs had decided against anything goopy for fear of it landing on your lap in the dark, but surely ordering the risotto would have put my blouse in much more peril than a little horseradish cream sauce and maybe a couple leaves of rocket would have done? The dumplings were just like the frozen ones I planned on picking up at the nearby Asian food shop down the road on my way home, but at GBP £7 (US $11.60) for five small dumplings and a ramekin of what the Brits seem to think goes with everything, sweet chilli sauce, I was underwhelmed. 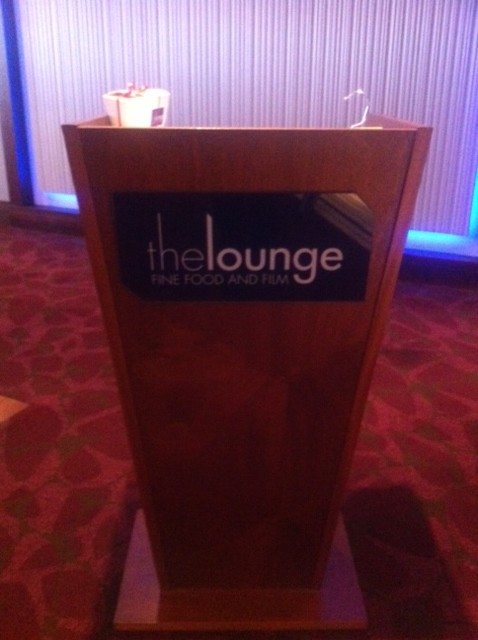 Within minutes I had finished my meal and my plates were whisked away. The Wolf of Wall Street partied on for three hours and whereas at home I’d likely have hit the pause button and rummaged around for something sweet to indulge in or perhaps just a cup of tea, I never would have pressed my blue call button and ordered dessert or another drink for fear of disturbing others around me. Others in the audience didn’t hesitate to call for service, but the constant, albeit quiet, motion of the servers did detract from the film. The one major benefit to going to the theatre to see a film is to be completely engrossed, involved in the world of the on-screen characters. Unlike home, it’s dark and loud, a full sensory experience you can’t escape from… until the server presents you with your bill about a half hour before the film is ending, right at the denouement. Then, five minutes later he showed up again and had me rummaging through my purse looking for my debit card so he could process it right there at my seat just as Leonardo DiCaprio looks bound for jail. I don’t know if this was just this server in particular or how things are done at The Lounge, but it was a serious distraction and took away from the enjoyment of the film.

I have lots of conflicting emotions about this luxury film-going trend. One of my all-time favorite movie experiences was years ago, in New York’s Times Square when my father and I went to see the first Batman movie (the one with Jack Nicholson as the Joker). The seats at this down-at-the-heel theatre did not bear close inspection, the floor was tacky and it’s likely my view was obstructed by a tall hairdo in the seat in front of me. The crowd was rough and raucous and hollered at the screen when appropriate and I’ve never had a more exhilarating or appropriate time at the movies, it was Gotham come to life. However, a Woody Allen flick or Jane Austen period drama would most certainly suffer under similar circumstance. As for the food, I personally love finding a restaurant near the theatre to eat afterwards so my friends and I can discuss the performances and slowly make the transition from the world of the film back to reality. But what if you’re a parent paying a babysitter a king’s ransom for your one night out a month and don’t have the luxury of time to see a movie and enjoy a meal out? Then perhaps this is your best option.

However, I can only conclude that if you are a real film buff or food connoisseur, then luxury film going is not worth it. If you want a more upscale experience try someplace like the Everyman or the Electric that offer comfy seats and decent snacks without the service issues. Considering that my day out at the movies was a whopping GBP £50 (US $83) for just me without any booze, I don’t think the full-service luxury cinema experience is worth it. Give me a tub of fresh popcorn to tide me over till dinner and a movie without interruption over this fancy newfangled trend every time.

Sally Hurst is an American Chef in London. As well as being a private chef she blogs at chefsallyjane.com and tweets @chefsallyjane