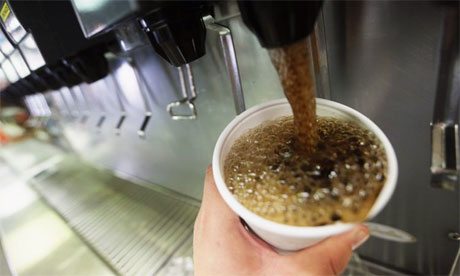 The past couple of months have not only seen the 50th anniversary of the Beatles appearing on the Ed Sullivan Show and the premier of Stanley Kubrick’s nuclear satire Dr Strangelove: or, How I stopped Worrying And Learned to Love the Bomb. It is also 50 years since the landmark report Smoking and Health: Report of the Advisory Committee to the Surgeon General, delivered on Saturday 11 January 1964, so as not to rock the stock markets but also to get maximum publicity in the sunday newspapers. Five years later cigaret ads were banned from radio and television. You’ve probably seen it featured on Mad Men.

This anniversary should make exhibitors ponder whether they too will soon find themselves on the wrong side of history when it comes to sodas and sugary drinks. The initial battle may have been won by Big Soda, but it is becoming increasingly clear that there is a long war ahead.

NATO President John Fithian delivered a robust response to New York Mayor Bloomberg’s attempt to ban large cup sizes of sodas, in his keynote at CinemaCon’13, devoting an entire paragraph of his speech to it:

Cinema patrons deserve the freedom to choose the food and beverages they want. That important consumer choice extends to serving sizes as well. I congratulate our associates at NATO of New York for their successful law suit against Mayor Bloomberg’s attempt to regulate consumer choice. If a patron wants to splurge and have a big Coke, they can. Or if they want a healthier option, they can make that choice too, without the government choosing for them.

That’s five uses of the word “choice” in just one paragraph, as well as the all-important term “freedom“, in framing the conflict as one between individuals’ freedom of choice against government attempt to regulate and remove that choice. This argument won the day in the courts, as reported by FJI’s Concessions Editor Anita Watts:

The biggest news of late on drink size restrictions in New York City is that they were struck down again. On July 30, the First Division of the New York State Supreme Court’s Appellate Division upheld the first ruling against the ban, saying the proposed law was unconstitutional. In March of this year, New York Supreme Court Judge Milton Tingling had ruled that New York City could not enforce the ban. His decision came a day before the ban was set to be enforced. Tingling called it arbitrary, capricious and beyond the city’s regulatory powers.

Exhibitor’s won the battle in courts and with Mayor Bloomberg replaced by Mayor de Blasio, who is more worried about the size of income inequality in NYC than by size of servings of Pepsi, the battle might seem to be over (1). But far from it.

This month it has become evident that the battle has merely shifted from New York and gone east and south, where it looks likely to find more fertile ground. California is the first US state where sodas could be forced to carry warning labels, just like cigaret packets do, according to the Sacramento Bee.

California would become the first state to require warning labels on sodas and other sugary drinks under a proposal a state lawmaker announced Thursday.

SB1000 would require the warning on the front of all beverage containers with added sweeteners that have 75 or more calories in every 12 ounces. The label would read: “STATE OF CALIFORNIA SAFETY WARNING: Drinking beverages with added sugar(s) contributes to obesity, diabetes, and tooth decay.”

Picture that facing movie goers lining up to buy concessions or on the side of the 16oz cup of soda dispensed in the multiplex, blocking part of the Avengers 2 promotion. But with the law proposal enjoying the backing of both the California Medical Association and the California Center for Public Health Advocacy, it is hard to argue against it. Not least as it does not technically infringe ‘choice’.

This is not a lone law attempt to tackle soaring obesity levels in North America:

– Vermont proposed a similar law last year, which is currently held up in the Committee on Human Services;

– San Francisco is proposing a referendum to approve a tax on soda and other sweetened drinks at a rate of two cents per ounce;

– Similar proposal to SF’s were previously put forward in Richmond and El Monte (a Los Angeles suburb), but were defeated by the drinks industry;

– A Soda Tax was approved in Maine in 2008 but repealed two years later following “a major lobbying effort from the American Beverage Association. Voters in Washington state similarly reversed their legislature in 2010″ (link);

Perhaps most significantly, though, the State of Hawaii is going beyond taxes and warning labels in trying to replicate the New York proposal outright according to the Centre for Consumer Freedom:

The Hawaii State Senate has introduced a bill, Senate Bill 2693, that would ban the sale of regular soda and similar sugar-sweetened drinks in containers larger than 16 ounces anywhere in the state.

The bill lacks one flaw of the New York proposal—there’s no “latte loophole,” since any quantity of added sugar makes a drink fall under the ban. Indeed, the only way to get more than a pint of drink at a time is to add booze, as adult beverages are excluded from the ban.

These efforts are also not restricted to the United States. In Mexico the President is looking to tax sugary food heavily in an effort to avoid a health epidemic in what was recently identified as the fattest nation on earth, according to FoxNews Latino:

Peña Nieto’s proposal to raise $950 million from the soda tax has drawn the beverage industry’s wrath in the country with the world’s highest yearly soda consumption; the average Mexican consumes 163 liters (43 gallons) of soft drinks annually. The government wants to use tax income to install water drinking fountains in schools, most of which don’t have them.

It is an issue that is also discussed in Europe, though with serving sizes typically smaller than those in North America, there is less pressure. Cinemas are mindful of it and see it as an issue that could erupt in the future.

Cinemas are not natural enemies of change or public health. Smoking has been banned in US cinemas long before Bloomberg made it illegal to light up in NYC bars and restaurants. Exhibitors have also already taken steps to eliminate or minimise trans fats from concessions offerings, in line with other eating establishments, but the sweet-tooth soda addiction will prove harder to kick.

It is no secret that in defending movie goers right to ‘choice’ Fithian is also necessarily defending exhibitors freedom to make money by selling carbonated sugar beverages. Coca Cola may no longer own a Hollywood studio (it sold Columbia to Sony in 1989), but it is still cinema exhibitors’ closest friend and partner.

Anyone who has attended CinemaCon knows that Coca Cola has by far the biggest stand ion the trade show space. The Coca-Cola Company also sponsors the final night’s Annual CinemaCon Big Screen Achievement Awards dinner and prize giving ceremony. Even as it promoted Diet drinks and fruit juices, there is no question that its classic sugar-laced drink remains its number one seller.

Cinemas may account for a small proportion of the US population’s soda consumption. However, the sizes are larger than any other individual serving sizes. “A ‘small’ cinema serving is said to contain a 23 teaspoons of sugar, while a large contains 44,” according to BBC anchor Jeremy Paxman, who questioned Coca Cola’s European president James Quincey, who admitted, ‘some people don’t realise how much sugar there is in Coca-Cola.'”

A Not So Sweet Future

While exhibitors are unlikely to face an attempted ban on large serving sizes anytime soon, they will increasingly find themselves going on the defence against public health advocates, parent groups, media and other interested parties. With people angry at the concession prices in general, they are more likely to see cinemas as profiteering without concern for public health, rather than venting their anger at 7-Eleven or Burger King.

A Pew Research Centre study has found that the American public is opposed to the idea of restricting drinks sizes, with “just 31% support limits on the size of sugary soft drinks in restaurants and convenience stores – 67% oppose this idea,” and “barely a third (35%) supports raising taxes on sugary soft drinks and unhealthy foods.” However, it also found that 69 per cent view obesity as a “very serious public health problem, substantially more than the percentages viewing alcohol abuse, cigarette smoking and AIDS in the same terms.” Around 67 per cent support listing calorie count and 61 per cent feel that government policies could do a ‘lot’ or ‘some’ to reduce obesity epidemic.

It is thus reasonable to expect that soda containers and dispensing machines in cinemas are likely to carry warning labels at some point in the future. Soft drink taxes are also likely to push up prices and will do more to limit serving sizes than an outright ban on 16oz+ containers. NATO is likely to continue talking about ‘choice’ and ‘freedom’ when it comes to sodas in the multiplex, but expect talk about ‘educating movie goers’ and ‘wider selection of offerings’ when it comes to drinks to start surfacing more regularly.

If US drugstore chain CVS can give up cigarettes it is not unthinkable that exhibitors can voluntarily cut down on sugary sodas or at least diversify more into other drinks options.  ‘Freedom of choice’ was also a mantra of Big Tobacco for a long time and it is only a matter of time until obesity, heart attacks and diabetes will galvanise the public the same way that lung cancer and heart attacks did. Most likely it won’t take fifty years.

(1) [Even the battle in New York may not be over. Only this week it was reported that Mayor de Blasio favours banning recipient of food stamps from using them to buy sodas. ““I’m someone who believes that [food stamps] shouldn’t have been used, for example, for sugary drinks. It’s something I agree with the Bloomberg administration on,” de Blasio said on the Brian Lehrer show.”]