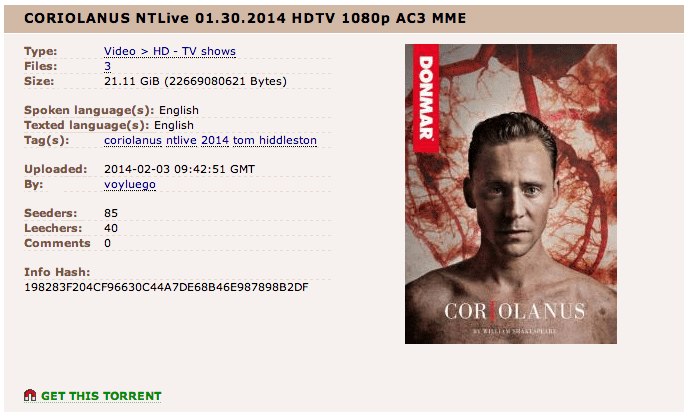 It is a measure of the success of event cinema that it is fast becoming a victim of internet piracy, a trend that is only like to get worse, for one very simple reason. With the NT Live screenings proving particularly popular for pirates, it is a challenge that the industry will have to deal with soon, though there are only two ways of doing this, neither of which the rights holders and distributors seem keen to embrace. (While we are aware that by highlighting this trend more people might find a way to access illegal copies online, we feel that a debate is required about how to best tackle this issue.)

The problem of event cinema piracy began with in earnest with the popular 2011 transmission of the Danny Boyle directed Frankenstein, with Jonny Lee Miller and Benedict Cumberbatch alternating in the lead role. The play was one of the early blockbusters of the National Theatre Live (NT Live), with even the encore screenings sold out.

Fans who were unable to get tickets or lived in territories where it was not screened soon found a way to watch the play as somebody had recorded it with a video camera in a cinema, the same way that most films get pirated. Judging by the comments on PirateBay, the quality is not great, but that is drowned out in the comments section by observations such as this one:

MarinaMurr at 2012-11-02 22:20 CET:
THANK you VERY much!!! As the previous author has said, I also created this account just to say THANK YOU!!! I even cannot express how grateful i am! So just thank you once again 🙂

NT was swift to take notice and issued a sternly worded posting in its NT Live blog, headlined, “OFFICIAL Statement re: Frankenstein DVD/Bootleg Recordings” where it wrote that:

“We do not in any way condone the piracy of recording, both because it is an illegal activity and because it is against the wishes of the artists whose work we represent. I would let you know that if you choose to record, distribute or download the screening of Frankenstein, you are breaking the law and risk legal action.”

However, a badly camcorded version of Frankenstein was no indication of what was to come. Today you can download in full high definition glory the NT Live transmissions of The Audience, Macbeth and Coriolanus, exactly as they were projected onto the screens of cinemas around the world. Searching for ‘NTLive’ on Piratebay yields a full 1080p version of Coriolanus that clocks in at over 21Gb, as well as a more manageable 720p version that is only 3.85Gb, with over 100 seeders. The Audience and Macbeth are also available in 1080p version, both just over 7Gb in size and both well seeded.

So how is it that pirates managed to crack the encryption of the NT Live screenings to be able to upload the masters and, presumably, also burn and sell them on pirate DVDs and Blu-rays? The answer is that they didn’t have to. NT Live and most other event cinema screenings go out ‘in the clear’, meaning that they are not encrypted. This issue was first highlighted here on CelluloidJunkie.com several years ago when alternative content (as it was then called) was still a nascent industry.

Talking to people in the industry, the reason for the lack of encryption is because of the risk of something going wrong in the cinema if it does not have the correct conditional access (CA) card for the satellite receiver box, as well as the cost and logistic of sending out the CA cards. Most cinemas are probably not even aware that the signal is unencrypted, as they are told the show is ‘decrypted’ in the receiver, which is only half true. CAs are different from KDMs for DCP films, which are not shown live, but store-and-forward from a server.

To tap into the satellite stream is not difficult. All you need is a motorized satellite dish with a controller, a high-definition receiver and a DVR or PC to record the data onto. The time and date of the NT Live events are helpfully provided on the website (the clue is in the word ‘live’), while a quick Google search will tell you which satellite and frequency is being used. For NT Live Hamlet last October, for example, it was transmitted on 1.0W, Intelsat 10-02 on the frequency 11473.

Anyone with the right equipment can thus enjoy, not just NT Live, but also the Met Opera and any other number of live events from the comfort of their home. And if they missed it, they can DVR it or download it off the internet. Obviously this is illegal and we do not condone such practices, but recognise that there is an un-tapped demand leading people to take such action.

The reason for the popularity of these events is clear – star power. The Audience with Dame Helen Mirren, Macbeth with Sir Kenneth Branagh and Coriolanus with Tom Hiddleston were all ‘marquee’ events and people download them for the same reason that they download films illegally. Here we come up against the second issue: why don’t the producers just put the events out on DVD or Blu-ray so that fans have a legal alternative? The answer is that although they might like to, they can’t.

As the NT Live blog explains:

National Theatre Live is made possible by the support of the artists involved and we are keen to be able to preserve this goodwill so we can continue to make future productions available. We appreciate there is a huge amount of interest in making the broadcast available on DVD but currently this is not the wish of the artists involved.

So no Frankenstein on DVD because Danny Boyle does not want it to be seen that way.

It is important to remember that it has been a major battle just to persuade stage directors and actors to allow their work to be transmitted to cinemas. I had previously heard that Sam Mendes was approached to do a cinema recording of his 1998 Broadway staging of Cabaret but turned it down. It has thus taken him a decade-and-a-half to come around to the idea of event cinema, with Coriolanus being the first play directed by Sam Mendes to be shown in cinemas.

Therein, however, also lies part of the reason why the event cinema industry is keeping quiet about piracy. The primary appeal of event cinema is to see the events live in a cinema with other people, replicating the theatrical experience, only with “the best seat in the house” provided by the camera. As such, it is unlikely that people will not buy tickets to NT Live King Lear in May because they anticipate being able to download it a few days later. Event cinema is experience cinema, which watching it at home does not replicate.

Even so, the industry needs to have an honest debate, because David Sabel of NT Live is correct when he writes that “If you are a fan of anyone involved in the creation of Frankenstein or the National Theatre, we would ask that you respect their wishes and decision, and hope that you will continue to support National Theatre Live in your local cinema.” He is right and you should. But then what do we do about event piracy (or ‘play theft’)?

If piracy numbers keep growing the National Theatre is likely to put pressure on its directors to make the plays available on DVD/Blu-ray. They might not like it, but consider that the first ever Met Opera, Julie Taymore’s Magic Flute has been published on DVD with all-but-one reviews on Amazon giving it five stars. It might not be the same thing as seeing it in the opera or even cinema, but for fans, it is often the only way to enjoy it once the stage/cinema version is over. As “DanzsaC” commented on Pirate Bay, “being in one of the countries where Coriolanus is not airing, I LOVE YOU FOR THIS. Thank you so much!” We don’t condone it – but we understand the motivation for it.