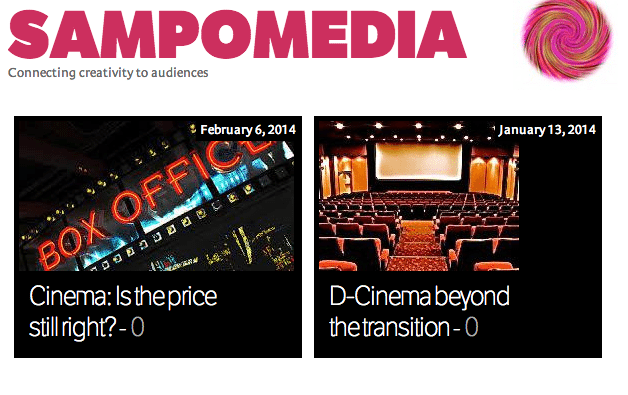 Are cinema ticket prices too expensive? The question that’s probably been around since the Lumiere brothers screened their first shorts at the Grand Cafe, Paris in 1895 is tackled by SampoMedia. Unlike the MPAA Head in his annual CineCon speech, they don’t compare it to the cost of an opera or Super Bowl ticket, but look at the hard numbers. “The price rise is illustrated by the growth in gross box-office revenues compared to admissions. In the five years 2008-2012, for example, box-office revenues in France rose at an annual growth rate of 3.7%, compared to a 1.8% rise in admissions; in North America it was 2.9% compared to 0.3%; and in Japan revenues rose at a rate of 9.7%, while admissions actually fell 0.8%.* The creeping increase in prices seems to be having an effect on consumer perceptions of value for money.” Perhaps not surprising then that 69 per cent of UK people sampled feel that tickets have gotten more expensive, while only 33 per cent feel they represent value for money. The article is well worth reading in full, not least because of its analysis of how ticket pricing disproportionately affects young cinema goers, a generation that cinemas cannot afford to lose. Link.

Mexico: Blockbuster is opening cinemas. Yes, you read that correctly. While the Dish-owned VHS/DVD renter died a death of a thousand Netflix cuts in the US, the subsidiary south of the border was bought out by Mexico’s Elektra group for $31m and is busy expanding. “While Blockbuster’s brand in the U.S. became sullied and deemed uncool after the rise of Netflix, there’s no such stigma in Mexico, where DVD rentals are still doing decent business.” Thus Elektra has expanded into electronics retailing. “Also in the works are two movie theaters, which will be called Blockbuster Cinema. Plus, Blockbuster will expand into online banking. Because why not? ” Link. Ireland: Dublin’s famous Screen Cinema has lost its distinctive sign. “Dublin City Council says it will investigate why a landmark neon sign on a Dublin cinema was removed without notice. The Screen Cinema on Townsend Street is now without its distinctive neon sign which had become an familiar part of the city’s landscape. In recent months the handwritten-style sign had fallen into disrepair, with many of its letters no longer working.” However, the cinema has been refurbished inside and is considered a local landkmark. Also note the famed Irish literary wit of the headline, “Writing not on the wall for Screen Cinema” Link.

UK: “Campbeltown Community Business has just announced that it has appointed a professional team to assist with the preparation of their second round bid for Heritage Lottery funding to restore and expand The Picture House. This is, of course, Campbeltown’s A listed cinema, built in 1913 and a charming architectural grace note on the waterfront of this magnificent town. The Centenary Project redevelopment will cost an estimated £2 million.” Link. USA: “The Tudor Village in Avondale Estates wasn’t for sale when Fisher Paty began making offers. One of its anchor spaces, the Towne Cinema, had been vacant for years. Paty, with Oakhurst Realty Partners, looked at the vacant cinema and imagined the city’s future. “It’s just a property I’ve always loved and I felt was underutilized,” he said.” Link.

USA: “A movie theater, small boutique hotel and apartment buildings no higher than five stories are envisioned by the first wave of developers at the former St. Anthony Hospital site.
The developers are under contract to buy part of the site, which will include multi-family residential and commercial and retail space.” Link.

UK: “The construction of a multiplex cinema as part of a comprehensive development in Wiltshire has been approved after an assessment was made of the available expenditure to support additional screens. The primary issue related to the potential impact on a cinema within a nearby town centre.” Link. Ireland: What does 4+8+8 equal? An overcapacity of cinema screens in a town with less than 40,000 inhabitants. “Nama is supporting a development at Scotch Hall in Drogheda consisting of eight new cinema screens and 50,000sq ft of retail space that is proposed by Edward Holdings, owned by Mr Barret. However, rival group Melcorpo has already converted unused retail space at its Drogheda Town Centre into eight cinema screens, with more than 800 seats and plans to open this in June.” The town already has a four-screen cinema. Link.

USA: Sometimes it takes a village – to change its bylaws in order to save the local cinema. “Cole, the owner of Kirkland Parkplace Cinema 6, is the first to admit times have changed in the movie theater business — some for the good, others for the bad. But on Jan. 21, the Kirkland City Council helped keep those changes looking positive when they passed an amendment to the Kirkland Municipal Code, which authorized Cole and co-owner, wife Chris McKenzie, to utilize the seat tax within ticket prices toward the cost of going digital for three years.” Link.

Cuba: One of Cuba’s most celebrated cinemas turn a hundred. “The emblematic Velasco cinema-theater, in which celebrities such as Tito Guizar, Jorge Negrete and Libertad Lamarque performed, will celebrate its centennial with film screenings, lectures, and other cultural activities… Velasco, with almost more than 600 seats, is a regular host for screenings from the Latin American New Cinema Festival, and is located in this city about 100 kilometers east of Havana, called the Athens of Cuba in the 19th century as a result of its cultural development.” Link.

UK: The controversy about the porn shoot in the East Finchley Phoenix cinema (see yesterday’s item) resurfaces, with the cameraman claiming that the management had been informed about the purpose of the hire. “Mr Johnson said staff would have been informed. “We always tell the people what we are,” he said. “We don’t use any subversive tactics. We don’t go around lying to people.” He added that no one should feel upset by the adult use of the cinema. “It is not a problem. You have paid for a booking and people know what you are using it for. It is all legal.”” Now wash your hands! Link.

CineStalgia: We never tire of photos of beautiful old picture palaces, particularly ones that are no longer with us. Here is a collection of mementos from the art-deco Majestic in Chaddesden. Link.