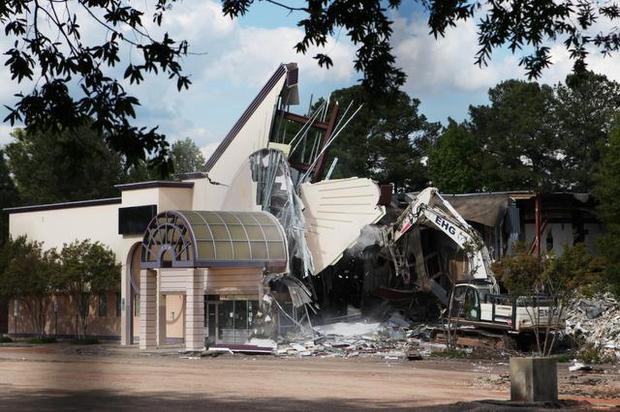 When the local art house cinema in Carey, North Carolina was torn down to make way for a grocery store, Indian expats had nowhere to see Hindi, Tamil and Telugu films. So they approached the local multiplex about screening Indian films. “Yanamadala approached Carmike about a year and a half ago about showing Indian movies. He had a connection to a film distributor from his college days at the University of San Antonio, where he used to show such films. “I started to look for theaters,” he said. “They gave me the opportunity.” Carmike agreed to a test run at its Morrisville theater, and now the movies are showing at more than 40 Carmike locations in the United States, Yanamadala said.” Regal has also followed the lead, showing the strong demand for Bollywood and other Indian films in The US. Link

Australia: The importance of cinemas contributing to their neighbourhood. “WYONG Council has endorsed an offer by Metro Cinemas which will result in $200,000 worth of public domain improvements undertaken on council land surrounding the proposed cinema complex at Lake Haven.” Link

USA: Zyacorp Entertainment is opening a new Cinemagic Stadium 10 In Portsmouth, New Hampshire. As well as featuring the usual state of the art technology, seating and concessions, they promise ‘autism friendly’ screenings and Rocky Horror Picture show nights (presumably not together). One commentator though grumbles about there not being an IMAX screen. Link

USA: California’s Orange County city of Santa Ana has a new cinema with eclectic offerings. “One day you’ll see a classic, then come back the next day and see a student film, poetry slam, or science-fiction film festival.” The manager of the Frida Cinema (headline calls it ‘Friday Cinema’) previously founded the Long Beach Cinemateque. Link

Germany: Digital conquers Berlinale. “Altogether, 1,000 films are being shown at Berlinale. About 60 percent of the film material is being delivered as Digital Cinema Packages (DCP). For the second time, Rohde & Schwarz DVS GmbH is supporting the Berlin International Film Festival (Berlinale). As Digital Cinema Partner, DVS and its systems enable efficient workflows to be created covering video ingest and storage through to Digital Cinema Packages generation and validation.” I’m surprised it’s not more. But is the other 40 per cent 35mm. Most likely not but HD-Cam SR, QuickTime and other digital platforms. Link

Google Glass: Following the incident earlier this week of a man being taken out of a screening and interrogated for wearing Google Glass in the cinema, AMC has confirmed it does not want people to wear the devices to screenings. “Ryan Noonan, an AMC spokesman, said “While we’re huge fans of technology and innovation, wearing a device that has the capability to record video is not appropriate at the movie theater.” Fair enough. Link

Belgium: The Flanders region of Belgium has clamped down on excessive volumes in cinemas. “Flemish environment minister Joke Schauvliege has reached an agreement with the cinema sector on a new system to control noise levels during the screening of digital films. “The goal is to protect the cinema viewer – and in particular children,” she said. The government of Flanders has already introduced strict volume limits for concerts, but the rules don’t cover cinemas. They require a different approach, Schauvliege explained, because volume levels in films vary enormously, from periods of silence to short bursts of loud noise. In order to determine the best way to regulate cinemas, the minister commissioned acoustic trials in five digitally equipped cinemas across Flanders.” Link

Auro: Datasat is pushing ahead with its immersive sound for the home technology. “Datasat Digital Entertainment, the world leaders in audio solutions for home cinema, has today announced it is partnering with Genelec, Lang AG and Screenline to create a dedicated Immersive Sound Experience room during ISE 2014.” Will this push Dolby into offering Atmos for the home sooner rather than later? Link

USA: Details about War Horse (the stage version, not Spielberg’s film) riding into US cinemas. “Fathom Events, National Theatre Live (NT Live) and BY Experience have come together again to broadcast the National Theatre’s original stage production of “War Horse,” pre-recorded live from London’s West End, for only one night in cinemas across the country on Thursday, Feb. 27 at 7:00 p.m. local time.” Link

India: More on exhibitors (PVR) broadening out to location based entertainment: “Multiplex chain PVR and Mexico- based KidZania will develop an indoor theme park and 15-screen theatre complex at Noida. The two companies have joined hands with International Recreation Parks Pvt Ltd (IRPPL), a joint venture between Unitech and International Amusement Ltd for the purpose. PVR and KidZania have taken 1,50,000 sq ft of space on rentals in the shopping mall developed by IRPPL. Leasing deal was handled by property consultant CBRE. Link

USA: More cinema dining, this time a 115 seat bar and restaurant inside an IMAX at Penn Cinema, in Lancaster, Pennsylvania. Sadly you are not permitted to take drinks into the cinema itself. Link

USA: “Virginia Beach-based Cinema Cafe is planning to open a dine-in movie theater with nine auditoriums and a lobby bar at Edinburgh Commons West in Chesapeake. Construction is slated to start this spring, according to a news release. The new theater will have 3-D picture capability in five of its auditoriums and will serve American food, beer, wine and spirits. Movie-goers order and get food at their seats.” Link

Retro cinema: Cinemas in Vienna are a breed apart; much like the rest of the city it seems a place where time has stood still since the start of the last century. “Buy your ticket to an art house movie, order a glass of wine and kick back on century-old seats: Vienna’s half a dozen old picture houses still draw crowds with their retro charm. At the Bellaria, a cinema founded in 1911 in central Vienna, there is only one screen, no bright lights and no posters of the latest Hollywood action blockbusters or Pixar animated capers.” Link