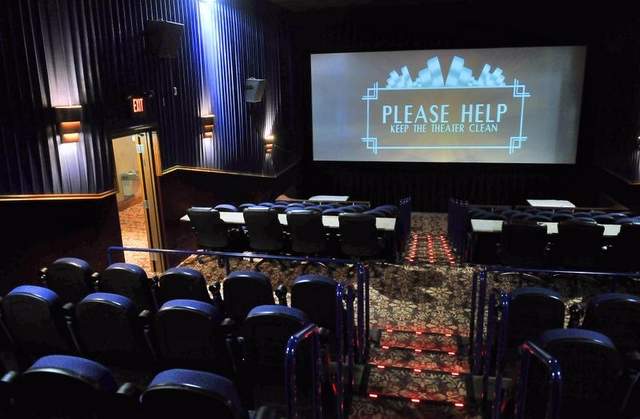 With close to 90 per cent of cinemas in the US digitised, the question about what would happen to the last stragglers loomed large even before Paramount announced that it had (reportedly) ended 35mm print distribution. The problem is that while one in ten screens is still reliant on film prints, their contribution amounts to just a few per cent. They typically do not qualify for VPFs (virtual print fees) and might not even be able to tap into NATO’s CBG (cinema buying group). Mostly they are small single-screen community cinemas whose finances were precarious even before the threat of the analogue cut-off.

So it is heartening to see that many communities have rallied around their local cinema and organised fundraisers of various typed that raise the $70,000-$100,000 required to upgrade a screen to digital. Below are some recent examples.

“The Brickhouse is now leasing two additional digital projection units after purchasing one digital projector for its largest theater last year. Its smaller theaters have been dark since the transition. The deadline caused hardship for some very small theaters, whose owners were faced with the cost of replacing equipment.” Link.

Some cinemas have turned to Kickstarter to raise the funds, with impressive results.

The De Pere Cinema has reached its fundraising goal to go digital just days before the deadline.

The owners of the De Pere Cinema say even though the campaign officially ends Friday night, donations can still be made. They say any funds above what’s needed for the digital conversion will be used for other theater improvements. Link.

Portland confirms its reputation as Hipster capital by doing a lot to save local cinemas.

“In the last year, the Hollywood Theatre installed a magnificent new marquee following a successful fundraising campaign. The Academy Theater managed to corral the cash needed to install digital projectors, ensuring its survival. One of Oregon’s last drive-in theaters, the 99W Drive-In in Newberg, won a nationwide contest to cover the cost of its own digital conversion.” Link.

This fundraising spirit is not restricted to the US alone.

The UK has seen cinemas brought back to life thanks to joint public-private efforts.

THE cinema experience is returning to Bewdley more than 50 years after the town’s Garden Cinema was closed. The new community-run cinema will hold weekly screenings of Hollywood blockbusters and art-house films from March at St George’s Hall. Cinema in the Hall has been brought about thanks to a number of grants and donations from the Bewdley Festival, Bewdley Round Table and other individuals and organisations. The grants helped to furnish the hall and purchase modern projection and sound systems. Initial funding from Defra (Department for Environment, Food and Rural Affairs) also helped repair the hall and fund a new extension. Link.

The small cinemas that survive the digital transition are likely to emerge stronger, not least because they will have greater flexibility of programming and they will not be restricted by the term of any VPF. Yet it is important to remember that for every one cinema that is saved this way we are likely to see one or more that goes under.

Digital is in itself no panacea for the many other problems that small cinemas face, as exemplified by this small cinema in UK’s Grimsby that received funding but is still not pulling in punters.

Despite screening some of the biggest blockbuster movies for a nominal ticket price, the cinema could be shut for good in six months.

The Lottery-funded project, which has been active in the town for three years, has seen attendance fluctuate and their last screening had not a single attendee.

As the article’s headline “Use your cinema – or face losing it” makes clear, the community ultimately support small cinemas best by attending regularly. They are not truly missed until they are gone, by which time it is often too late.