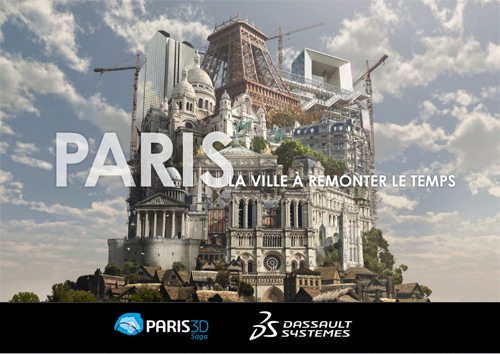 In the car from Paris’ Gare de Nord station to Dassault Systèmes’ campus at the outskirts of town I got chatting to a British journalist for an education supplement. He confessed that he had never been to Paris before, but that he recognised the streets we were driving down from a video racing game. This got us talking about how you can do a tourist-like exploration of Venice and Florence playing ‘Assassin’s Creed II‘ and was an appropriate intro to the demonstration we were about to experience of Paris 3D. While a niche application for cinemas currently, it points to interesting potential future uses.

Dassault Systèmes, the sister company of aerospace major Dassault Aviation, specialises in simulation and CAD software with a particular focus on 3D solutions for 11 different industry sectors, ranging from automotive to architecture for projects such as the Guggenheim Bilbao. The company has recently begun focusing on 3D applications for culture, education and research, which is what lead it to cinema. As Mehdi Tayoubi, VP Digital & Experiential Strategy, stated at the start of the presentation, “3D is about how we can revolutionise science, culture and society. We are doing 3D to anticipate the real world.”

The first major fruit of this new focus was a two-year project with Harvard University and a staff of 10 from Dassault to create ‘Giza 3D‘, dubbed “reverse engineering archeology.” This allowed researchers and students to explore the Giza pyramid complex and figure out how it is possible to go about building these pyramids, which far from just stacking stones blocks, required complex engineering for the tunnels and chambers. The project was selected to be showcased at the South by SoutWest Interactive (SXSW) and the app is freely available here. 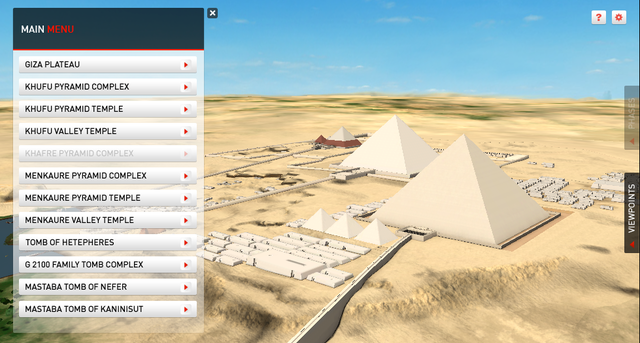 Next, the learnings from this project were poured into what Tayoubi dubbed a “real transmedia project”, the Paris 3D Saga. Remember the scene in “Inception” where Ellen Page’s character shows Leonado DiCaprio how she can manipulate the city and create new buildings? That’s what the team of engineers at Dassault have been doing, “using virtual reality as a key engine for different media” according to Tayoubi, only here in aid of research and education rather than popcorn. The result can be appreciated on the website, through an iPad app, on a Blu-ray/DVD, but is most impressive when seen on the big screen in full stereoscopic 3D.

The project does not simply capture contemporary Paris but allows for the exploration of the city over the past 2,000 years, going back to the early Roman settlements. This has meant re-constructing ancient buildings that no longer exist, such as Coliseums, but also more recent ones, like the Bastille that required extensive work with architects and historians. Interesting historical nuggets were unearthed, like the fact that the Notre Dame was not built from the ground up, as you might expect, but from left to right, in order to replace an existing church. Another is that the Bastille was far from the imposing building that history teaches us, as revealed in this article from the New York Times:

In a 1789 painting of the Bastille, the French artist Hubert Robert portrayed that Paris fortress as a huge, seemingly impregnable structure and the Parisian revolutionaries who razed it as small, vulnerable human beings. More than two centuries later, thanks to 3-D modeling software, a different picture of the Bastille emerges. In its recreated setting it is the Bastille that seems small, even vulnerable.

The dimensions of the Bastille are still known, but even one expert on the city’s history was taken in by Robert’s hyperbole — until he saw the 3-D simulation, which shows the Bastille nestled among surrounding buildings rather than towering over them. Now he sees the fortress, and the painting, in a different light.

“It was pure propaganda,” said Jean-Marc Léri, director of the Carnavalet Museum, which is devoted to the history of Paris.

The scale of the Bastille is one of many revelations that emerge from “Paris 3D,” an ambitious project by Dassault Systèmes, a French software company, in partnership with the Carnavalet, that has created an interactive 3-D, virtual-reality representation of Paris through the ages.

The project is on-going, so there are constantly more buildings, layers and information added. As Tayoubi stated, “we want this to be the on-line reference for Paris.” See the iPad preview below:

What is particularly impressive is the ability for a guide or controller to move freely around and zoom in on particular buildings or places, allowing the viewer to travel down the streets of historical Paris as if walking there, while the guide explains what we are seeing. The audience can thus ask questions or suggest places in real time and get a close up and explanation. This has interesting potentials for cinema, as will be explored at the end of this piece, but also inherent limitations. The easiest way to demonstrate this is to record a tour, machinema-style, with a narration which is what has been done. Screen Daily describes it in this good write-up:

The documentary, called “Paris: The Great Saga”, was a coproduction with Planète+ and ran this autumn on French TV. Directed by Xavier Lefebvre, the film was produced in two versions – a 90 minute feature and a 4 x 52 minute series. The film tells its story of Paris though a family’s tour over Paris in a hot air balloon that begins in 3000 BC. It’s a story device perfectly aligned to take advantage of the aerial flights of fancy that Dassault’s 3D virtual camera allows.

The directors could use the virtual Paris to create any kind of shot they wanted, on the fly, some of which were plates for additional action to be added later. The sophistication of the 3D model meant that a shot could start from high above the city and end on a tiny detail of Notre Dame Cathedral all with a high degree of resolution. Dassault’s Paris model also features a population of “extras”, virtual citizens of each period, dressed in appropriate costumes, filling the streets and buildings.

This project has also found a home in the cinema for the past three years, more specifically Paris’ IMAX at La Geode and in collaboration with French director Luc Basson, whose The Extraordinary Adventures of Adèle Blanc-Sec feature extensive recreations of Belle Epoque Paris (and Egypt).

The interesting thing is how this could be now be taken further in cinemas, as opposed to film-making or other than to just screen the linear documentary. The limiting factor is the need for a guide (and narrator) at the controls of the computer connected to the projector, which makes each installation site-specific. Even so it opens interesting potentials for education and VR tourism, with groups of students or tourists being given a virtual guided tour of Paris – or any other city that develops a similar project. These events could be sponsored by a company with particular ties to the city. Given a high-profile speaker, it can even be used to resurrect the largely gone tradition of travelogues, where knowledgable and/or famous historians and explorers take their audience through exotic locations. Rather than just slides from an expedition to Borneo, this would showcase remote and historic cities, or even show people in the cities themselves perspectives that would otherwise not be available (such as climbing up the Eiffel Tower).

Dassault is not resting on its Paris laurels, but is already working on its next city, which is Brazil’s Rio. The company also demonstrated a fascinating 3D ‘cave’ solution, where deep sea divers were trained to walk around a sunken wreck in preparation for the real dive. There are also further augmented reality (AR) work with Nestle and Kung-Fu Panda 2, creating AR on cereal boxes. However, Tayoubi is also clear that there is a limit to what the company will do. “Our work is not to be a Pixar or DreamWorks [Animation] of tomorrow; we are not going to make CGI movies.” In a way, the VR 3D Paris points to a more interesting direction and potential for the cinema – as anyone who has played Assassins’ Creed II will testify.

Disclosure: the Paris trip to Dassault Systèmes was paid for by the company. They also handed out a Blu-ray to all journalists and served rather lovely coffee.