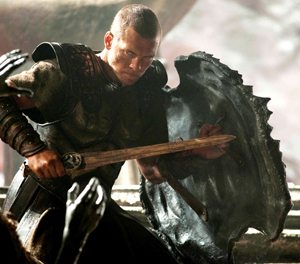 “Release the Kraken,” Liam Neeson’s Zeus commands in the WB’s “Clash of the Titans” re-make, but Hollywood should be more concerned that the film itself might release a backlash against the 3D format. There are several indicators that point to a perfect storm brewing against what has come to be regarded as the cinema industry’s digital savior.

Amongst Hollywood filmmakers there has been unusually vociferous attacks against Warner Bros.’ decision to go for a rushed eight-week conversion of “Clash of the Titans” to 3D.  The conversion is a true test for Prime Focus whose technology is unproven on such large scale projects.  Fresh off the global success of “Avatar” James Cameron weighed in against “slapdash conversion” in a recent BBC article that re-hashed Mike Fleming’s more in-depth Deadline article, where Cameron said that after the success of his award-winning epic:

“Now, you’ve got people quickly converting movies from 2D to 3D, which is not what we did. They’re expecting the same result, when in fact they will probably work against the adoption of 3D because they’ll be putting out an inferior product.”

Micheal Bay threw more fuel on the fire in a Deadline post and even appeared to take a direct swipe at Prime Focus, an Indian based post-production company that has been doing the bulk of the work on “Clash of the Titans'” conversion from 2D-to-3D :

“I’m used to having the A-team working on my films, and I’m going to hand it over to the D-team, have it shipped to India and hope for the best? This conversion process is always going to be inferior to shooting in real 3D. Studios might be willing to sacrifice the look and use the gimmick to make $3 more a ticket, but I’m not.  “Avatar” took four years. You can’t just sh*t out a 3D movie. I’m saying, the jury is still out.”

Ouch! Interestingly neither Cameron nor Bay have directly disputed the quality of the most recent film converted from 2D-to-3D, Disney’s “Alice in Wonderland”, though the film’s director Tim Burton has taken pains to stress that there is a difference between how to use Dimensionalization.   In the same BBC article which quoted Cameron, Burton observed, “With all these tools, you can see good 3D, bad 3D, good conversion and bad conversions.”  Reading between the lines, the filmmaker was saying “Alice” falls into the camp of ‘good conversion’ while “Clash” does not.  (If you’re wondering why Dimensionalization is capitalized in this paragraph it’s because the word is a trade mark of the company In-Three which did the majority of the work on “Alice”.)

Others who have come out vocally against “slapdash conversion” are Jeffrey Katzenberg, angered that “Clash” is threatening to take away screens from DreamWorks Animation’s 3D “How To Train Your Dragon” in its second week.  Meanwhile, Jerry Bruckheimer, at ShoWest last month, said there had been some pressure to go for a fast conversion of “Prince of Persia: the Sands of Time”, but he felt the the quality wasn’t good enough.

As the media began to get an advance look at “Clash” over the past week they seem hard pressed to say anything kind about the 3D aspect of the film, at best saying that it was “okay”. But it was Kirk Honeycutt in his Hollywood Reporter review of “Clash” who put his finger on what Hollywood should find most worrisome:

The major drawback, especially now, when 3D is all the rage, is its feeble effort in that department. Added as an afterthought in post-production, the 3D barely registers. Few moviegoers will think it’s worth the extra bucks. It’s a pity the idea didn’t occur in preproduction, as the opportunities for real 3D excitement exist in virtually every frame.

Honeycutt was not the last to have a few choice words regarding “Clash’s” 3D conversion.  Besides influential film critics such as Roger Ebert weighing in on the topic by calling it a ‘juvenile abomination’, so too are popular bloggers like Anne Thomnpson of indieWIRE, who in a recent post weighed in with her thoughts:

When designed in advance and shot in 3-D, a movie can work really well. But turning movies into 3-D after the fact looks awful…”Clash of the Titans” throws you out of reality, blurs and muddies the action, makes the movie look even worse than it probably is. That good old-fashioned feeling of getting lost inside a fantasy space is GONE.”

Added to this is what appears to be a festering resentment amongst the general public about the higher ticket prices that have been imposed by theatre owners for 3D titles.

Take this provocatively titled post on TechDirt “Hollywood Seeks To Kill Off 3D Golden Goose With Much Higher Prices “.  It’s not so interesting for what the post says (there’s nothing new to the argument that nobody likes higher prices for anything, whether food, fuel, cinema tickets or e-books), but it attracted far more comments than any other recent item on TechDirt; 119 at the time of writing.  These following comments are representative missives:

Another dumb, greedy move on Hollywood’s part. The last time I sat in a movie theater the ticket price was $7.50, and that WILL forever be the last time.

That line really needed a spewage warning. Movie prices are already high enough that it’s about $30 for me, my wife, and my pact brother to go for one showing. When we went to see UP in 3D, they tacked on $3 per ticket for the glasses and asked us to return them after the show. That’s one hell of a price for an hour-and-a-half rental.

Should audiences feel the 2D-to-3D conversion of “Clash” is not on par with previous 3D titles, it could serve as a troubling precedent and trigger a public backlash against being overcharged for what is perceived as an inferior cinematic experience.  In fact, we have a recent industry example of a similar scenario.

Less than a year ago television actor Aziz Ansari went to see the “Star Trek” reboot on an Imax screen, only to come out fuming that he had been ripped off by paying for a big screen experience which was only marginally bigger than a regular multiplex screen. His blog post was quickly picked up by online publications such as Slashdot (Why You Probably Shouldn’t Waste $5 More For Digital IMAX) as well as Celluloid Junkie and put Imax’s executives on the defensive over the big screen screen experience offered by multiplex Imax screens.  While Imax screens have performed nicely with titles such as “Avatar”, an increasing number of major exhibitors have set up their own brand of big screen experiences, which could serve to undermine Imax’s long-term business.

Audiences growing skeptical of 3D titles is a serious threat which some in Hollywood have taken notice of.  Cameron spoke about it directly in a USA Today interview stating, “If people put bad 3-D in the marketplace they’re going to hold back or even threaten the emerging of 3D. People will be confused by differences in quality.”  Cameron himself is considering converting his blockbuster “Titanic” to 3D, though he has major reservations about the process and technology under which “Clash of the Titans” was converted.  “It’s never going to be as good as if you shot it in 3D, but think of it as sort of 2.8D.”

Celluloid Junkie contributors have been labeling converted titles 2.3D when speaking with one another.  No matter what you call it, if after this Friday’s opening of “Clash of the Titans” audiences revolt against “slapdash” 3D at an inflated price, Hollywood might rue that it released the monster of 2.3D.