– Cinedigm is making a big deal out holding a live Q and A for a film, which, contrary to what it claims, has been done many times before. From the press release, “Cinedigm Digital Cinema Corp. (NASDAQ: CIDM) announced today that it will host the first-ever [original emphasis], live virtual Q&A between a film cast and theatre audiences nationwide as a part of the June 19, 2009 opening night of the feature film “The Narrows.”  The live Q&A will be simulcast to selected theatres across the country giving audiences direct access to the movie’s cast members. Reuters adds. “Moviegoers in 17 U.S. cities will be able text-message questions to the cast of independent movie, “The Narrows,” and watch the actors answer on screen in theaters, giving Cinedigm Digital Cinema Corp a trial by fire in how to get moviegoers more involved in the cinema experience.” This was tried five years ago by Arts Alliance in the UK for M Night Shyamalan’s ‘The Village”, but more significantly, was done on a regular basis way back in the mid 90s by Network Event Theatres. So not quite “first.” Not even close;

– Indian e-cinema operator InterWorld Digital has raised $10m from institutional investors to expand its network. From BoC, “Interworld Digital has identified 300 theatres in the Mumbai circuit to bring them into its digital cinema network. The company would require approximately Rs 450 million (Rs 45 crores) to digitise these 300 theatres.During the last one year, Interworld Digital has digitised 52 theatres in the Mumbai circuit like Eros, New Empire, Paradise and Jaya amongst others. A total investment of approximately Rs 12 – 15 lakhs is required to upgrade each theatre. ” At $24-30,000 per theatre this is most likely not going to be 2K, but India is already ho,e to the world’s largest e-cinema networks, so it doesn’t really need Hollywood;

– Terrorist attacks are sadly becoming all too common place in Pakistan and cinemas are collateral victims too. From Daily Times, “There were two cinemas in the city [Lahore] that suffered from terror attacks. The FIA blast completely destroyed the Regal Cinema, located a few yards away from the office. The cinema has stopped screening movies since the FIA blast on March 11, 2008. The May 27 attack on the Rescue 15 building has left the Plaza Cinema in a state of despair. The roof was badly damaged and expensive equipment was destroyed due to the blast while the doors and widows were also shattered.” No compensation is forthcoming from the government. Note the poster for “Die Hard 4” in the picture of Plaza cinema;

– India’s BIG Cinemas will be the first* in the country to screen operas in digital on the big screen. From ET, “BIG Cinemas, an R-ADAG company, has forged an alliance with London-based More2Screen to bring Italian operas to Indian cinemas. Big has entered into a revenue-sharing arrangement with More2Screen, which will involve screening two operas and a concert…. According to Tushar Dhingra, COO, Big Cinemas, the objective has been to provide distinct content.” Opera in cinemas have been a great success in US, Europe and Japan, but India with its very different musical heritage will be an interesting test, not to say ‘trial by fire.’ Full disclosure: I was involved in setting this event up;

*(‘first’ in the sense of no one else in India having done this before. Ever.)

– Carmike Cinemas has appointed its current chairman S. David Passman III to the post of President and CEO, with board member Roland C. Smith taking over as Chairman of the Board. Smith is quoted in the press release as saying, “”We are optimistic about our future prospects under David’s management based on Carmike’s industry leadership in digital cinema and 3D cinema deployments. The Company has achieved significant operating, financial and balance sheet improvements including increases in total attendance and average attendance per screen.” They certainly can’t do any worse than under previous Chairman Michael Patrick who was given a $5.5m golden parachute for leaving the company after helping Carmike achieve a $127m loss in 2007;

– Box office prospects are strong in China, according to THR.com. “China produced 406 feature films in 2008 and saw its boxoffice jump 30%, the fifth consecutive year of more than 25% growth….In its annual report on the nation’s media industry progress, the State Administration of Radio Film and Television said overall 2008 boxoffice receipts reached 4.3 billion yuan ($635 million), led by such companies as the state-run China Film Group, Huayi Brothers Pictures, the Shanghai Film Group and the New Picture Co.” Despite restricting Hollywood releases to just 20 titles per year, it features in the global Top 25 – pity that the studios get just 13 cents out of every dollar equivelant spent at the box office;

– Having lost the CGR deal to Christie, Barco has clawed its way bck into France through a joint deal with Ymagis and Cinemeccanica for French exhibitor Cap Cinéma. From the press release, “Cap Cinéma selected Barco’s DP series of projectors for its digital conversion, powered by financing from Ymagis. During the first deployment phase, running until September 2009, theaters in Blois, Saint-Quentin, Périgeux, Agen, Carcassonne, Montauban, Beaune and Fribourg will be digitized. Rollout for other complexes will start in October 2009.” This deals also highlights the fact that having been one of the laggards in the European conversion process (“Numerique? Non!”) for many years, France is emerging as one of the leading territories in terms of digital conversion, which as a recent Screen Digest report notes, has lead to an upswing in terms of local French digital releases (0 in 2006, 12 in 2007 and 15 in 2008);

– ‘Ultra-Lux Plaza Cinema Cafe 12 Theatres Open up in Downtown Orlando‘ and based on the description, the cinema real does seem to be ‘ultra’lux’. “The 57,000 square foot theater will be operated by the American Theater Corporation founded by proprietor Jim Duffy. This upscale state of the art cinema features digital surround sound on all 12 screens. The two largest screens are digital high definition projection systems capable of 3-D movies, a first for Central Florida. There are over 1,100 leather rocker seats in a stadium configuration with 10-inch tables and ample legroom. Concessions range from traditional candy and popcorn to a full menu of pizza, sandwiches, and appetizers from cheese platters to caviar.  Beer, wine and champagne will be served throughout the theater as well as in two wine bars.” WESH reports that “Theater owners hope patrons will not only catch a flick, but they hope to bring back the dinner and a movie concept. Orlando’s first downtown movie theater in decades is expected to be an economic shot in the arm to local businesses.” Let’s also hope that it starts a trend for more down-town & high-end multiplexes world wide. Interestingly enough the multiplex was paid for by Orland’s tax payers, as a means of urban re-generation;

– Imax has announced an IPO of 9.8m shares, just as share holders have woken up to the fact that “Harry Potter 6” will be arriving two weeks late on the sometimes-giant screen, THR.com points out. “Shares of Imax dropped 4% on Monday to $7.31 after a Wall Street analyst said the delay “should negatively impact Imax boxoffice results.” “Prince” opens wide July 14. Although it opens on two Imax screens that day — one in New York and one in Los Angeles — it won’t get the wide Imax treatment until July 29.” Imax screen are mostly booked up with “Transformers 2” when “Potter 6” arrives. But with Imax under fire for its shrinking screen sizes, exhibitors like Cinemark and Greater Union are introducing Imax-like theatres (called, respectively, Cinemark XD and Vmax), says WSJ (subscription required). Perhaps it’s time for Imax itself to launch ‘Imax-lite’ – just like Imax, only fewer storeys;

– Washington DC’s Screen on the Green outdoor cinema is back, says the Washington Post. “HBO, Comcast and the Trust for the National Mall will now jointly bankroll the series’ 10th year on the Mall this July and August, after fans sent hundreds of e-mails to complain and beg for its salvation.” It is no small irony that a cable television company and the by-word for watching movies at home will spend hundreds of thousands of dollars for people to leave their homes and watch movies with mosquitos. July 20th is the kick-off date; 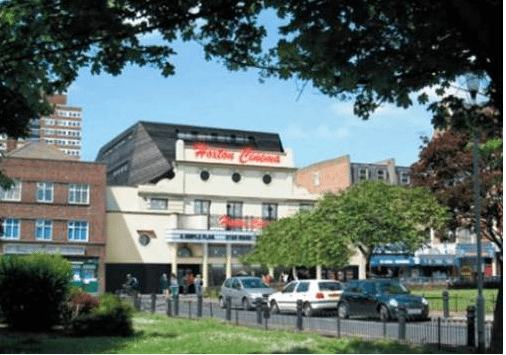 – And finally, moddish British pop singer Jarvis Cocker is annoyed that one of east London’s oldest cinemas is being renovated next to his Hoxton home. From NME, “Calling the development a “big ugly lump”, Cocker launched into a tirade while talking about the situation to the Hackney Gazette.  “I don’t want office workers to see me parading in my pyjamas,” he stated.” Neither do we, Jarvis, neither do we. But you’re not getting in the way of my very own beautiful local art deco cinema getting re-built, you prat.