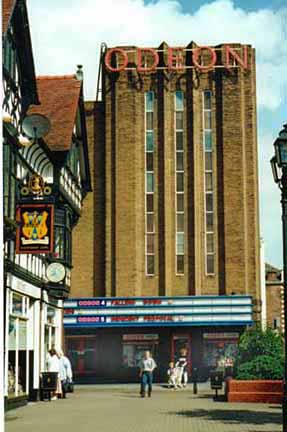 – Things are returning to semi-normal in Mexico, with fear of an H1N1 pandemic abetting and cinemas outside of the capital are re-opening, we are told by THR.com. “All employees must wear protective masks and those handling food are required to wear rubber gloves and wash their hands frequently. After each screening, theaters will be scrubbed down with detergent or a bleach solution. Additionally, audiences will find antibacterial gel at the entrance of each theater.” An unintended side-effect of the mustn’t-call-it-swineflu is that cinemas will smell fresher than ever before;

– If yesterday’s item about r$5.5m golden parachutes-for-failures at Carmike left a bad taste in your mouth, here is a story of a better run family cinema operation in the US deep South, Malco Theatres, from the California Chronicle. “Jimmy Tashie points out that Malco has survived ” depressions, recessions, wars and even home theaters.” He says he looks forward to seeing how technological developments will further influence film operations. “Where can we go from here? Well, 3-D and digital cinema for one,” he said. “At present, Malco is branching out and showing live feed from the New York Metropolitan Opera, concerts, sporting events and even teleconferencing.” Malco is also actively supporting  independent film organizations like the On Location: Memphis International Film Fest, the Indie Memphis Film Festival and the Oxford Film Festival in Mississippi, as well as providing a cast-and-crew screening to the undeservedly straight-to-DVD political thriller “Nothing but the Truth“;

– Staying with US exhibitors in the South, Regal Cinemas has appointed former CFO Amy Miles to take over as CEO from the chain’s founder Mike Campbell, while SVP finance David Ownby is new CFO and Gregg Dunn stays on as President/COO, according to THR.com. “Campbell described his new role as one focusing on corporate strategy. “This is something I’ve been thinking about doing for several years,” Campbell said. “I informed our board a couple years ago about what I was thinking about doing, and they are glad I’ll still be engaged.” Miles said she was pleased to be handed the corporate reins “in such an exciting time for Regal and the theater exhibition industry.” ” It is Ms Mile’s quote that is today’s deadline banner and we fully endorse her view – this is the best industry to be in, and not just because the box office is doing well;

– Some digital signage news from the UK and US. Odeon has been using signage from Connectvision (pictured right) to drive concession sales in Liverpool and Belfast, according to Digital Signage Today. ““By using dual-purpose tills we have more flexibility at the point-of-sale. If the need arises we can use the concessions areas for both concession and ticket sales. Connectvision allows us to use the bank of screens to maximum effect when promoting popcorn, drinks, confectionery and other concessions, as well as topical special offers linked to films at the cinema,” said Alison Burns, retail manager U.K., Odeon U.K.” Meanwhile in the US Santikos Theatres uses Allure Global Solutions‘ signage (top), according to Digital Signage Expo.  “A large screen displaying animated beauty shots of beverages pouring over ice and other imagery which promotes brand awareness and appetite appeal are a part of the overall solution for Santikos Theatres. Allure Global has seen sales lift for digital promoted products in the area of 7-9% for their digital menu boards in a theatre environment. Also, internal proprietary research with a beverage company and a theatre chain has shown that the incidence of a beverage purchase is 10% greater after viewing its digital imagery on a screen, than from its static counterpart.” Will these interactive signage displays show the calorie count in New York cinemas, as recently mandated, we wonder;

– But no signage, digital or otherwise, for Doncaster’s Odeon, whose art-deco building is threatened by demolition, we learn from South Yorkshire’s The Star. “An English Heritage report turned the building down for listing because it had been too heavily altered inside and outside to be of interest in a national context, but said it made a positive contribution to the Hallgate conservation area and could be a candidate for a local list. The Friends of Doncaster Odeon (FODO) was set up to try to save the building. Spokesman Ray Nortrop said much of the information put forward by the trust echoed its own experts’ advice. The Odeon, formerly the Gaumont Palace, opened in September 1934 and was designed by the architects WE and WS Trent. ” Not every cinema is wort saving, but surely Doncastrians desefve a renovated cinema more than a casino in its place. As a commentator notes in DigitalSpy, “Now there will be no option but to use the chav infested VUE” while another one opines “Vue Doncaster – number 1 for people who want to watch films in a shoebox.” Visit this great site for some beautiful photos of what the cinema used to look like. It was also where local lad Daniel Craig saw his first Bond film;

– Projector maker Ballantyne of Omaha has reported Q1 results for 2009 and business is looking good with reveniue up almost 10 per cent, according to Reuters. “Q1 2008 net revenues increased 9.8% to $14.2 million compared to Q1 2007 net revenues of $12.9 million. The increase was principally due to recording as revenue in Q1 2008 the sale of digital projection equipment in 2007 on deferred payment terms.” That’s a five-fold growth in digital projector revenue, which “more than offset an anticipated decline in sales of traditional analog film projection systems.” More reasons to be cheerful, even though gross profit was down slightly from $2.7m to $2.3m. Warren Buffet, he of Omaha too, could worse than to invest in this company;

– There appears to be no end in sight to the stand off in India between film distributors and multiplexes. This leaves Hollywood distributors with a dilemma, as a backlog of US titles builds up that will fight even harder than usual with local films for screens this summer. From Business of Cinema. “As was reported by Businessofcinema.com last month, some studios had postponed the release of their films in India in order to show their support to the producers. Two big movies that are slated to release from Fox Star Studios and Sony Pictures Releasing of India are the Hugh Jackman starrer X-Men Origins: Wolverine and Tom Hanks starrer Angels & Demons respectively. Promotions and marketing activities of both movies had been kept on hold until yesterday’s meeting.” If the releases are delayed much longer the main beneficiaries will sadly be the pirate disk vendors, who are all to ready to step in and sate the demand;

– Which leads us to the larger question, is global day-and-date increasingly unavoidable in today’s wired world. The Guardian dwells on this question in an article headlined ‘If you can’t buy it legally, of course you’ll download it‘. Far from condoning it (OK, maybe other than for TV shows), the journalist  out  that “There was a time when the system worked. From the earliest days of cinema, a system of staggered worldwide releases of Hollywood movies developed. It made sense: there were only a certain number of prints and it took time to ship them across the world. Nick James, editor of the British Film Institute’s magazine Sight and Sound, told me that in the 1970s you could sometimes wait two years to see a Hollywood film in the UK.” But those days are over and global advertising creates global awareness and instant demand, which is why “It’s time for staggered releases to end. Every day they continue, more people, tired of seeing adverts and reviews of shows and movies they won’t be able to buy legitimately for months or years, call up a techie friend and say “that torrenting thing, how do you do that?“” I still remember the ShoWest a few years ago when Jack Valenti gave what inadvertently amounted to a Master Class in How To Download Films From The Net. If anyone didn’t know the way to do it before the presentation, they were fully qualified to fire up their torrent engines by the end of it.