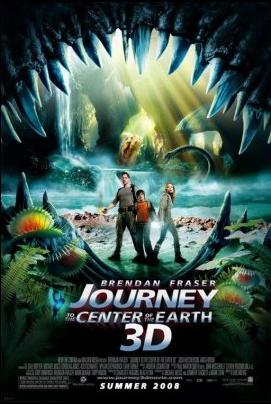 One of the consequences of the absorption of New Line into Time Warner is that some new distribution strategies are being put into place. And someone at WB obviously feels that ‘Journey 3D‘ (aka ‘Journey To The Centre Of The Earth 3D’) will perform better at the box office if it is also released in 2D. Or so I’m told by someone with good connections at New Line.

Now there are those who have a point when they say that the ‘Hannah Montana’ 3D concert film would have made money even if it was shot on PixelVision, because of the built in audience. But does anyone think that ‘U2 3D‘ would have been less of a flop if it had also been available as ‘U2 2D’?

As for ‘Journey 3D’ the main 3D selling point is, as you might have guessed from the title, the fact that it is stereoscopic. As this review from Comingsoon.net of its screening at ShoWest tells you:

David Tuckerman, the President of New Line Theatrical Distribution, came out to introduce the movie, and told the audience that it was still planned for a July 11 release, although it will be distributed through Warner Bros. as per the new Time Warner plan. Director Eric Brevig then came out and said a few words and introduced two of the film’s stars, Brendan Fraser and newcomer Anita Briem, who said a few brief words before the movie started with very cool 3D versions of the New Line and Walden Media logos.

[T]he 3D does take some getting used to, maybe since they do a few too many gimmicky Uncle Floyd type shots of things flying at the camera, as well as a couple of 3D enhanced jump scares that actually did have me jumping a few times. Once the trio enters the underground world, the movie sometimes looks a bit too green screen with its CG, possibly a factor of the 3D, but Brevig and his FX team have done an amazing job building this fantastic underground world with scenes that often leave you truly wowed. The CG creatures aren’t the greatest in terms of design or execution, particularly the piranha-like fish creatures they face, and it’s surprising how primitive they are considering Brevig’s background, but there’s still a great sense of danger, adventure and most of all, fun, throughout the movie, which did make it an enjoyable experience. The end credits are also very cool, utilizing the 3D CG to create a neat recap of some of the film’s best moments.

For those of us who sat through the film at ShoWest, I’d say that this review is far too charitable. The characters are one dimensional, the dialogue hackneyed, the plot contrived and the action scenes derivative. Yours truly sat there the whole time thinking of how much greater it could have been of a real talent like Peter Jackson or Steven Spielberg had directed it, as opposed to some VFX hack making his directorial debut.

The one redeeming aspect was the 3D of what came across as the bastard offspring of a tired theme park ride crossed with a un-original platform computer game. And now this 3D aspect is going to be removed.

It makes the intro 3D spiel to the film preview come across as that much more ironic, as reported in The Salt Lake Tribune:

“It’s a force that cannot be ignored,” actor Brendan Fraser told reporters during ShoWest, the convention of movie-theater operators earlier this month in Las Vegas.

Fraser was promoting his summer movie, “Journey to the Center of the Earth 3D,” an update of the Jules Verne story that bills itself as the first-ever live-action film shot in digital 3D.

Fraser said his movie is “really kind of a beta of where cinema is headed.”

Or not, as it turns out to be the case.

When this film flops, as I’m convinced it will, don’t expect anyone at New Line to shed any tears over WB’s improved distribution strategy.

Besides, 2008 will remain the placeholder year for digital 3D, which will not come into its own until 2009, when the likes of James Cameron, Steven Spielberg, Peter Jackson and Pixar get behind it.