London’s The Guardian has an interesting article by its film critic Peter Bradshaw singing the praise of small cinemas. Really small cinemas. Think less than a 100 seats. 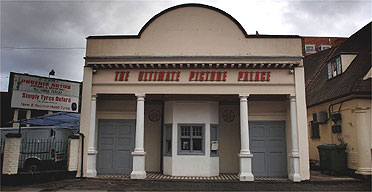 The article also has a Top Ten of the greatest small cinemas in the UK, which includes an old student favourite of mine, namely The Ultimate Picture Palace in Oxford:

Open since 1912 and in its current guise since 1996, the Palace is a cosy, musty, atmospheric favourite with both locals and students. A mix of second-run features, cult films, late showings and classics ensures a loyal following. “We’re like a cross between an arthouse and a grindhouse cinema,” says owner Saied Marham. “We’re not the most modern building – and when you come here you have to suspend your disbelief. But we let the films speak for themselves. We do things differently and show all kinds of films; we might take a modern film like Atonement and show it alongside an exploitation film.

Interestingly I recently met an entrepreneurial Australian living in the UK who has proved that you can operate a 98-seat cinema in a semi-rural location exclusively with 2K DCI-grade digital cinema equipment (no 35mm) and make it profitable. More about that in a later post.