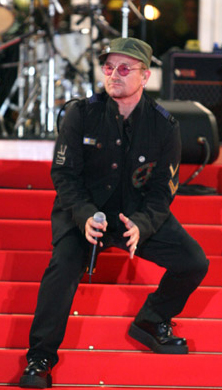 Normally better known for distributing animal documentaries, National Geographics will be bringing U2 3D to digital stereoscopic cinemas in January 2008 world wide. (Cue the inevitable jokes about showcasing mammoth films about aging rock dinosaurs). Anyone who attended this year’s ShoWest, Cannes Film Festival, Cinema Expo, IBC or ShowEast can’t have failed to hear about it already, as it must be the most trailered music movie ever. According to the original article in Variety:

Concert pic was produced by 3ality Digital and directed by Catherine Owens and Mark Pellington. Owens has been U2’s visual content director for more than 15 years, while Pellington directed the band’s “One” video.

“Digital 3-D is a new cinema medium that truly allows moviegoers to immerse themselves in the experience, energy and emotion of being in a prime seat at a U2 concert,” 3ality Digital CEO Sandy Climan said.

National Geographic Cinema Ventures prexy Lisa Truitt sad the release of “U2 3D” is a natural expansion of her division’s growing presence in theatrical distribution.

More details about this new direction for National Geographics was announced recently in th setting up of a new unit “that will incorporate National Geographic’s Cinema Ventures, Feature Films, Kids Entertainment, Home Entertainment and Music & Radio divisions.” Given that Beowulf will have finished playing in digital 3D by then and no other major digital 3D film will be out for some time the concert film should have its pick of the 1,000+ digital 3D screens in the US, with additional ones in Korea, UK and elsewhere.

In more traditional 2D digital news, it’s been also announced that Bon Jovi will play on more than 100 screens that are part of the Christie/AIX network on 6 November, while on 14 November Garth Brooks can be seen live on 24 Empire cinema screens in a joint event with National CineMedia’s Fathom:

“It’s things like this that make me praise technology. The gift that AEG and participating theatres have given me is to be able to go on a virtual tour without leaving home. How does it get any better than that?” said Garth Brooks.

Hmm… I suppose the only way technology could top that would be a 3D hologram of Bono that could be sent to every trouble spot in the world at the same time, without the singer himself ever having to leave Ireland.