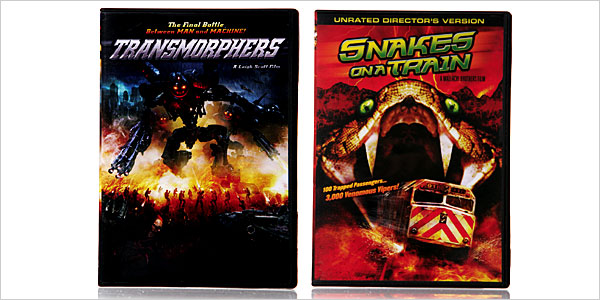 A fascinating look in this New York Times magazine article (‘The New B-Movie‘) about straight-to-DVD films trying to ride on the coat tails of big Hollywood releases – and succeeding! The IMBD page for ‘Transmorphers’ is hilarious. Plot keywords are: ‘Lesbian / Man Versus Machine / Captain / Futuristic / Soldier ‘ and the one person to watch and review it was not blown away:

I only stumbled onto this movie after having mistaken it for “Transformers”. That was disappointment number one. Well, being the sci-fi fan I am, I saw it through anyhow.

The acting was poor, though about what I had expected. Like the acting in Starship Troopers but with less memorable faces.

The plot had potential, but turned out to be a bad Matrix Revolutions rip off.

Most disappointing of all was the graphics. The special effects throughout the movie were simply horrible. Way below par anything you would expect to see today. It would have looked amateur 15 years ago.

I don’t recommend taking this one on sober.

If you liked this title, IMDB helpfully suggest you might also like ‘Transformers‘. Do-oh! The IMDB message board of the film has posts from the director, with headlines such as ‘Fools…you have fallen into my trap!!!‘ I guess that says it all.