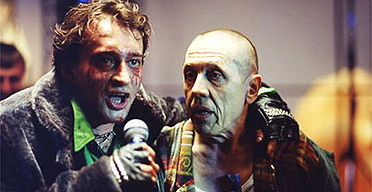 After several years of post-Soviet decline, cinema going is picking up in Russia on the back of new multiplexes and a boom in local production. Two articles highlight how the country has turned itself around from a state of rampant piracy (still prolific) and closing cinemas to a new found confidence at the box office. The London Times article (‘$30 million sci-fi story set to cash in as Russian cinema lifts off again’) almost immediately gets straight down to the hard numbers:

Ticket sales are expected to top $500 million this year, almost double the amount in 2004. In 1995 box-office receipts were $8 million. About 250 films are in production, more than during Soviet times, placing Russia alongside France as the most prolific centre of cinema in Europe.

Hundreds of screens are also opening across the country. With ticket sales rising by 30 to 40 per cent a year, analysts predict that box-office revenues will top $900 million by 2009.

The revival of the film industry reflects the rise of the Russian middle class, as growing numbers of people can afford a night at the cinema. More than 100 million tickets were sold last year, and the Russian market now ranks in the world’s Top 10.

A major contributor to this trend has been the revival of Russian blockbusters such as ‘Night Watch’, ‘Day Watch‘, ‘9th Company’ and the upcoming ‘Inhabited Island’ (the $30m sci-fi film of the article’s title), with Russian films representing a quarter of the box office takings and five out of the top ten film are domestically produced titles. UK’s The Guardian takes a deeper look at the films and their implication for Russian cinema in (‘The Russians are coming!‘):

But however on-the-fly the birth of the Russian blockbuster sounds, it’s not quite what it appears. The country’s film industry had been in the doldrums in the early 90s with the loss of Soviet central funding, dwindling to only 12 features in 1997. Channel One, which is still 38% state-owned, is attempting to galvanise Russian film-making with the Night Watch franchise, in classic Russian style: a sudden, enforced march to catch up with the times, led by Stakhanovite example.

“It was like an army operation … We understood from the very beginning that Russia needs big, ambitious and brave film-making,” says Bekmambetov, “Before us, there was only arthouse – great, talented movies for European festivals – and very bad, very cheap and creatively weak commercial movies.” It seems to be working: last year, production was up to 150 films.

Despite Fox pushing ‘Night Watch’ internationally the appeal of these films outside Russia is limited, with ‘Night Watch’ taking less than $0.5m in the US. But the Russians do not care what the rest of the world thinks:

Director Timur Bekmambetov saluted the new reality: “We’re not producing a movie, we’re producing an event.” At the film’s Moscow launch, producer Konstantin Ernst spelled out the party line: “This is our cinema, and whoever isn’t with us is against us.”

You heard it here first, mess with Russian cinema at your own peril. (Photo of ‘Day Watch’ courtesy of The Guardian)