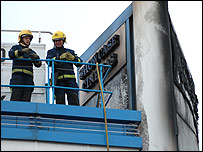 A small fire in Showcase cinema near Bristol, UK broke out this afternoon. The BBC has a short article about it:

About 50 people were in the Showcase Cinema in the St Phillips area, near the A4, when the fire began on Wednesday afternoon.

No injuries have been reported. The fire broke out in a store room and damaged signage on top of the building and a corner of the facade.

I’m sure the firefighters who were called out to extinguish this blaze were too young to know how lucky they are that celluloid isn’t actually used for film copies any more. Or those 50 movie patrons might have been much crispier by the time they got there. (Photo: BBC.co.uk)