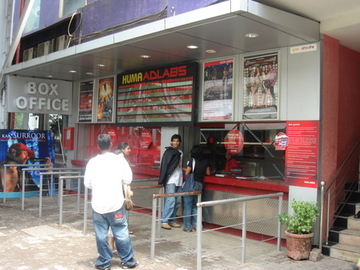 For a country that produces more films than Hollywood and sells more tickets each year than the US, you would think that India had a lot of cinemas. It doesn’t. Rather shockingly it is one of the most under-screened countries in the whole world. Whereas in the US there are 177 screens per million inhabitants, in India that figure is just 12. So with a middle class of some 300m people, there is a lot of scope for multiplex growth in India. According to the article ‘Multiplex biz continues to show impressive growth‘ in Newindpress.com some 1,200m crore ($300m) over the next two years, and it’s mainly being pushed by shopping mall building:

Atul Goel, CEO, E-City Ventures says, “Cinema has always been a crowd puller. Cinema multiplexes are a perfect example of convergence of retail and entertainment across the mall and high-street organised shopping formats. Multiplexes are now proving themselves to be an integral part of a successful shopping mall.

The trend is only set to grow as many Indian states lower entertainment taxes on cinema tickets that can range form 80 to 100 per cent on top of the price. This come as the film making industry, long the preserve of financing form organised crime as banks refused to lend money to film producers (who were not regarded as a legitimate industry), is expanding and getting more corporate. This from the article ‘How the reforms changed Bollywood‘ from the Times of India:

Today, financial liberalisation has transformed the industry. Filmmakers, small and large, can get bank finance, mostly easily from the new private sector banks. Some filmmakers have floated new companies on stock markets, and rewarded investors with good profits and high share prices. Some who started small are getting big. UTV, for instance, has tied up with Will Smith for two Hollywood films, and has sold an equity stake to Walt Disney. Big business houses (Tata, Zee) are also entering the industry.

Equally amazing to the level of under-screening of India is the fact that the country has no major studio system for producing films. It is only in recent years that independent producers are finding homes in larger organizations. As India and China grow in the coming decades, we are likely to see them making even greater inroads into overseas markets. Already this has started happening on the multiplex side, with the news that ‘India’s Pyramid Saimira bids for Australian multiplex chain Hoyts‘ (from Forbes.com). Don’t be surprised if Indian brand multiplexes will one day be found across the US and Europe, but for now they have a big home market to focus on.