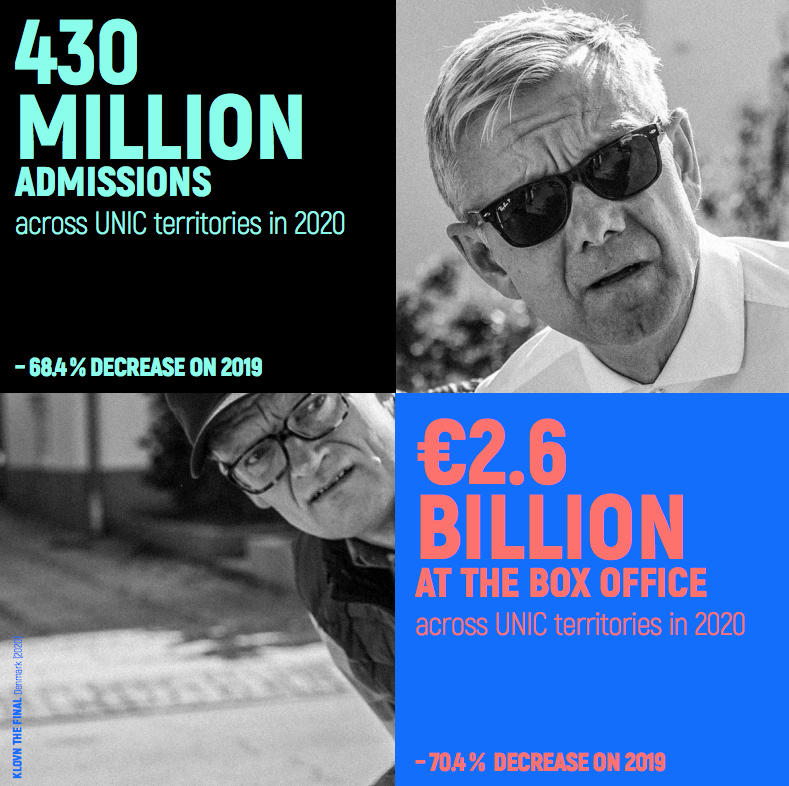 The International Union of Cinemas (UNIC), the European cinema trade group, has today published its Annual Report, examining key cinema trends across the 38 territories represented by the association during 2020.

The report – available online – provides an in-depth look at recent developments in Europe’s cinema industry during a period when COVID had a significant impact on the sector, as it did so many others.

During the year, European cinemas suffered a 70.4% decrease in box office, amounting to a total decrease of EUR €6.2 billion in revenues compared to 2019. A similar 70.6% reduction was observed in the European Union, resulting in a EUR €5.1 billion drop in revenues.

These challenging figures reflect the impact of the COVID-19 pandemic on the cinema industry, which resulted in months of complete closure and occupancy restrictions across Europe and globally.

This performance comes after a very successful 2019, when European cinemas grossed over EUR €8.8 billion at the box office and attracted more than 1.34 billion cinema-goers.

More positively, the UNIC Annual Report also looks at the successful reopening of cinemas and the return of audiences to the Big Screen. It also highlights the resilience of cinema operator as well as their capacity to adapt, playing an essential role in creating value in the film value chain. As a result, UNIC reiterates the need for the industry to adopt a “cinema first” model to ensure full recovery for the whole sector.

The document also details key legislative and regulatory developments in the form of a number of public policy issues that affect cinema operators, whilst also setting out the association’s advocacy activities to ensure that cinemas’ place at the centre of policy efforts towards further prosperity for the entire European film industry is safeguarded.

Many of the trends examined in the report will also be discussed during the week at CineEurope, UNIC’s official convention and Europe’s premier gathering of cinema exhibition professionals from the region and beyond. The event takes place from 4-7 October at the Centre Convencions Internacional Barcelona (CCIB).

CineEurope
Organised in partnership with the Film Expo Group, CineEurope – UNIC’s official annual convention – brings together cinema professionals from over 50 countries. The 2021 edition of the show takes place at the Centre Convencions Internacional Barcelona (CCIB) from 4-7 October and involves a growing number of film and product presentations from major international as well as European film studios, a cutting-edge trade show, as well as a seminar programme exploring latest industry trends in European cinema exhibition.