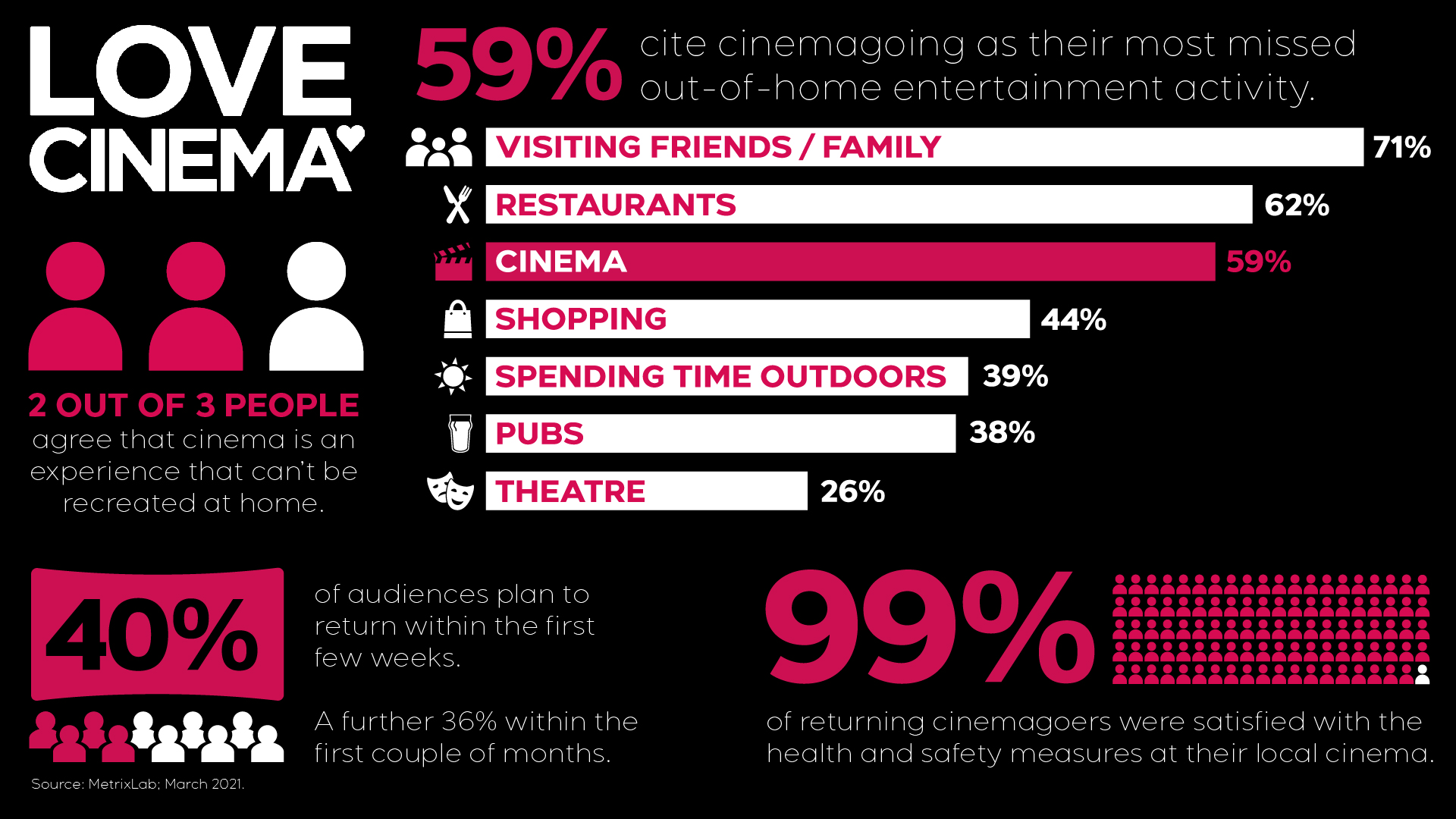 Survey results released today confirm that the UK public is more eager than ever to return to cinemas when they start to reopen next month, with 59% citing the cinema as their most missed out-of-home entertainment activity.

London, UK (April 8, 2021) – A nationwide survey, carried out by research agency MetrixLab and commissioned by the Film Distributors’ Association, reveals a steep rise in urgency to return to cinemas as soon as possible, with 40% of audiences planning to return within the first few weeks after reopening and a further 36% within the first couple of months.

The research also confirmed that lockdown over the last year has reignited audiences’ passion for seeing films on the big screen, with those who have digitally rented or purchased films highlighted as the most likely to return to the cinema as soon as they reopen.

These encouraging findings confirm that cinema is something that can’t be recreated at home, with two-thirds of respondents favouring the spectacular big screen experience, immersive sound, special effects, and access to a wide range of new films that only cinema can offer. That big screen must-see appeal has remained stable throughout the pandemic, when many film fans’ movie-watching has been limited to home entertainment.

With no recorded cases of COVID traced back to a UK site, cinema delivers an unrivalled big screen experience, with audience members seated at a safe social distance in air-conditioned, well ventilated theatres with extensive safeguarding measures in place. The survey shows a high level of confidence with the rigorous standards of safety, putting cinema at the top of the entertainment sector in this regard.

Following 12 months of lockdowns and restrictions, the survey further endorsed how well-loved cinemagoing is. Past research has consistently proved that cinemas provide vital support for the health and well-being of our communities. Getting out of the house and watching a film on the big screen allows us to escape and immerse ourselves in another world, if only for a few hours.

Iain Jacob, Cinema First Chair commented:
“After a long period of lockdown, it’s great to see that such a large proportion of the public can’t wait to come back to the cinema. Our research has confirmed what we had hoped: after being at home on lockdown since December we are all keen to escape to the cinema to experience the magic that only comes from watching a film on the big screen. Cinemas across the UK are thrilled to be opening their doors again and safely welcoming back film fans and resuming the thriving culture of cinemagoing.”