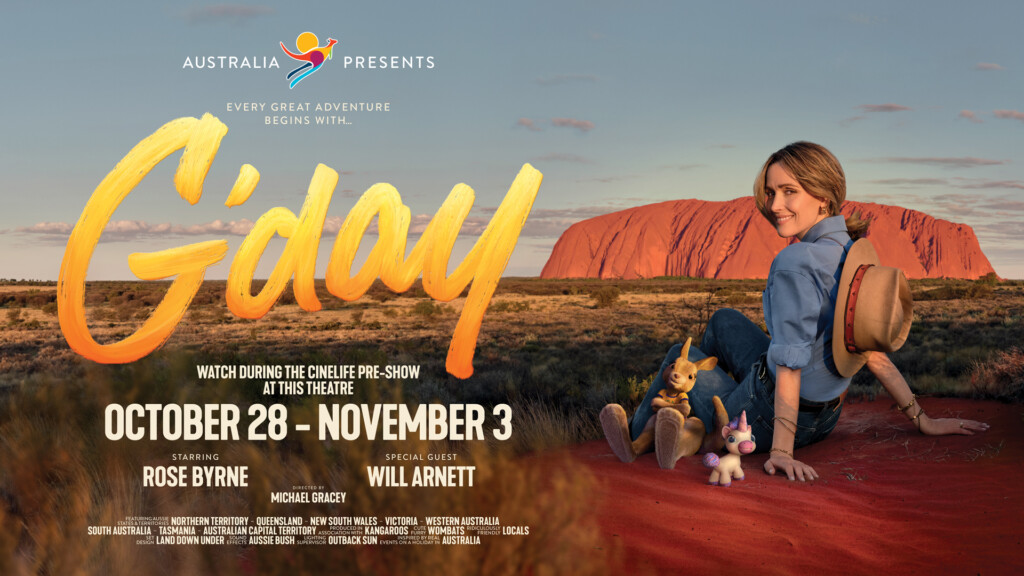 Tourism Australia has partnered with Spotlight Cinema Networks, the industry leader in reaching affluent U.S. moviegoing audiences, to promote the next installment of its global There’s Nothing Like Australia brand. This new campaign invites international travelers to Come and Say G’Day and discover the true meaning of an Aussie welcome.

The multifaceted campaign includes a short film titled G’day that will introduce the world to two lovable CGI animated characters: Ruby, the souvenir kangaroo, voiced by Australian actress Rose Byrne, and Louie, the toy unicorn, voiced by actor Will Arnett. The film, directed by Michael Gracey, follows the adventures of Ruby and Louie as they explore Australia’s iconic sites and together discover the true meaning of an Aussie welcome.

The cinema-advertising campaign will launch October 28, 2022, with the G’day short film exclusively appearing in Spotlight’s CineLife Preshow at theatres in top markets, including New York, Los Angeles, and Dallas. In addition, a cinematic sixty-second creative spot will run through the end of December 2022 across all Spotlight screens in its coveted Trailer Pod, just prior to the upcoming movie trailers when the house lights are dimmed.

“This partnership with Spotlight Cinema Networks will ensure the epic locations featured in G’Day are experienced on the big screen, from the beauty of the Northern Territory’s Nitmiluk Gorge and the awe-inspiring Sydney Opera House to the buzz of Melbourne’s laneways and the welcoming sands of Cottesloe Beach, Perth. This rich cinematic experience will fully immerse Spotlight’s guests, introducing them to the film’s star Ruby, and bring them closer to booking a trip and Come and say G’day in Australia,” said Tourism Australia’s Vice President – The Americas, Chris Allison.

About Tourism Australia
Tourism Australia is the Australian Government agency responsible for attracting international visitors to Australia, both for leisure and business events. The organization is active in fifteen key markets and activities include advertising, PR and media programs, trade shows and industry programs, consumer promotions, online communications, and consumer research.