Screenvision Media Reaches for the Stars at 2019 Upfront 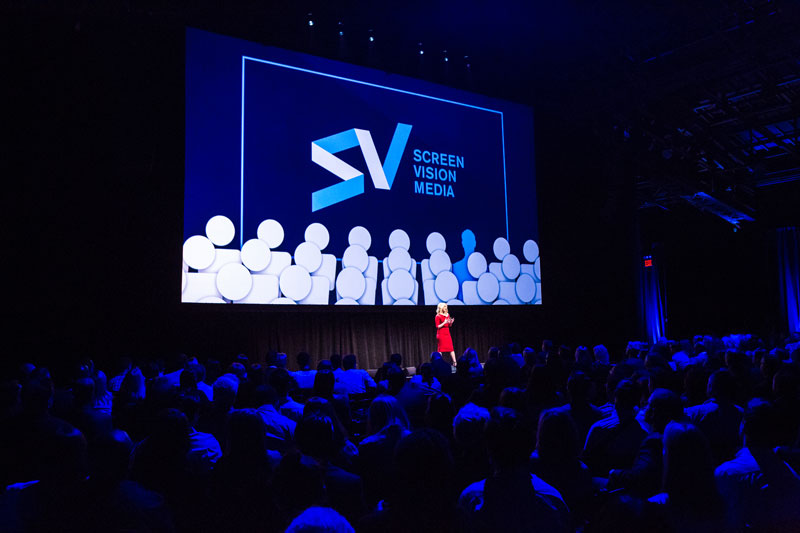 Capitalizes on smart audience reach with new tools and initiatives

Screenvision Media’s Upfront event reinforced that, year after year, cinema continues to be a proven draw for audiences. In fact, 2018 was the most successful year on record for the industry, with a total gross of over $11.6 billion. The constant stream of highly anticipated, masterfully made, and top-quality movies hitting cinemas keeps entertainment seekers returning to the movie theatre on a consistent basis. This is plainly evident in the success of the staggering performance of Avengers: Endgame, which has already broken 28 box-office records: It became the first film in history to earn over $1 billion for its debut, had the biggest worldwide opening and is currently the second-highest grossing film of all time, among other accomplishments. With films like Star Wars: The Rise of Skywalker, Frozen 2, Wonder Woman 1984 and more set to premiere, 2019 and 2020 are shaping up to be historic years for even more box-office records.

Cinema advertising’s high performance comes as the appeal and reach of television advertising continues to decline due to decreased live ratings, cable cord-cutting consumer habits and a cluttered broadcast media landscape, leaving that audience fragmented and increasingly difficult to reach. In contrast, cinema advertising remains the most stable media vehicle for reaching highly desirable and engaged audiences. In 2018, audience attendance and engagement was so strong that cinema consistently delivered within the top premium video content every week. The same audience members who are opting out of, or refusing to engage with television advertising, are reachable at the movie theatre. And unlike more than 80 percent of television viewers, once in the theatre, moviegoers are not distracting themselves during films with other devices but rather are fully engaged and devoted to what is on the screen. With television viewership on the decline, cinema advertising offers impactful, incremental reach for advertisers looking to connect with an otherwise inaccessible audience.

Cinema’s impressive reach is due in no small part to its emotional impact. At Screenvision Media’s Upfront event, acclaimed actor Vince Vaughn spoke to the profound emotional connection people have with movies and the theatre experience. Having made his mark both in front of and behind the camera, he discussed his passion for storytelling and producing content that leaves a lasting impression on the audience, particularly when it promotes equality, representation and increased understanding and empathy. Mr. Vaughn helped reinforce the unique power of the movie theatre experience and its ability to create lasting memories, evoke the full spectrum of human emotion and keep audiences captivated and free from real-world distractions.

The powerful connection and personal impact of movies provides a positive and hugely beneficial association for advertisers; cinema advertising has been proven to produce a greater emotional response in viewers than television advertisements. To better showcase and deliver on this association, Screenvision Media announced that it plans to make the emotional aspects and engagement rating of movies more measureable and quantifiable. The company will examine how the emotional layer and context of certain films and advertisements impact consumer engagement and habits. In doing so, brands, advertisers and partners will be able to create even deeper engagements among their viewers, reaching their audience in a more memorable, measurable and impactful way.

“For generations, movies have captivated audiences and brought people together like almost nothing else can,” said John Partilla, CEO, Screenvision Media. “As other forms of traditional media have started to fall by the wayside, the emotional draw of movies remains as strong as ever. We are excited to offer our partners meaningful ways to engage with this audience and to continue delivering lasting impact.”

The captivating, enthralling pull of cinema not only keeps audiences returning to the theatres, but also keeps them fully engaged once they are there. To let brands capitalize on this intense and undivided attention, Screenvision Media will once again offer its hyper-successful 10 Pack option in 2020, giving advertisers the chance to align with and appear before the rapt audiences of the most anticipated movies of the year. In addition, the company plans to further enhance, demonstrate and measure the reach of cinema advertising with its new Smart Network. This data-enabled digital component of the Front + Center preshow enhances program targeting, digital retargeting and attribution in a way that goes beyond behavioral data to include transactional data. By identifying members of the moviegoing audience, the digital movie pixel compiles rich, actionable data and can measure how specific movies drove purchases for select advertisers.

“With so many great movies coming out in 2020, we are proud to offer our partners the 10 Pack for the third year in a row, and to place their advertisements in front of the most highly engaged audiences,” said Katy Loria, chief revenue officer, Screenvision Media. “We are also excited to offer the new Smart Network option. This new tool gives us the ability to better quantify and measure the ROI of cinema advertising, giving our partners a clear and proven look at how their advertisements drive transactions.”

Recognizing the proven emotionality, quality and measurable impact of cinema’s reach, Screenvision Media continues to highlight and expand the diversity of that reach. The company is an avid supporter of diversity, intersectionality and inclusion within the movie industry, a societal priority that continues to gain traction and advocacy from industry leaders and moviegoers alike. Screenvision Media is particularly invested in supporting the presence of women in film and has announced new initiatives to promote the inclusion and meaningful representation of women on the big screen. Screenvision Media has partnered with the Geena Davis Institute on Gender in Media at Mount Saint Mary’s to work with studios at the earliest scripting stages to ensure gender equality in onscreen representation. The company will introduce a new GD-IQ certification package in their Front + Center preshow where Geena Davis will introduce a special look at upcoming films that receive GD-IQ certification.

“Entertainment has a profound influence on our culture. Using our research tool, GD-IQ, we have created the GD-IQ Check to spotlight films that depict diverse and gender-balanced portrayals,” said Geena Davis, founder of the Geena Davis Institute on Gender in Media. “By partnering with Screenvision Media, we can make a dramatic cultural change and show women and girls that their aspirations and options are limitless. Our motto is: If She Can See It, She Can Be It.”

Madeline Di Nonno, Institute CEO, added, “Our data and research tools have always been the best solution to inform creative decisions to advance onscreen gender equality and intersectionality in storytelling. Our new GD-IQ Check will be the gold standard in measuring onscreen portrayals for the entertainment industry.”

Screenvision Media has also aligned with the Association of National Advertisers’ (ANA) SeeHer movement; the leading industry initiative on gender equality in media and advertising. SeeHer evaluates brand ads and assigns GEM™ scores based on accurate portrayals of women and girls. In conjunction with SeeHer, Screenvision Media will be creating a #SeeHer Film Trailer Package, allowing brands’ ads to target films aligned with their products. The new offering allows advertisers to bring GEM™ positive advertisements to film, and give marketers expanded opportunities to showcase their support for increased authentic gender representation in entertainment and advertising.

“Supporting and encouraging gender equality, particularly in the media, is an important cause for us at Screenvision Media,” said Christine Martino, executive vice president of ad sales, Screenvision Media. “We are proud to strengthen our commitment to ensuring women are fully represented both behind and in front of the camera. By using GD-IQ and GEM™ as tools to evaluate the films and advertisements we work with, we are honored to help shine a spotlight on this issue and work to improve both portrayals and presence of women in cinema.”

Screenvision Media’s 2019 Upfront event was held at the Ziegfeld Ballroom in Midtown Manhattan. The event featured appearances by and interviews with famed Hollywood actor Vince Vaughn as well as a performance by Frozen 2 actress and singer Idina Menzel.