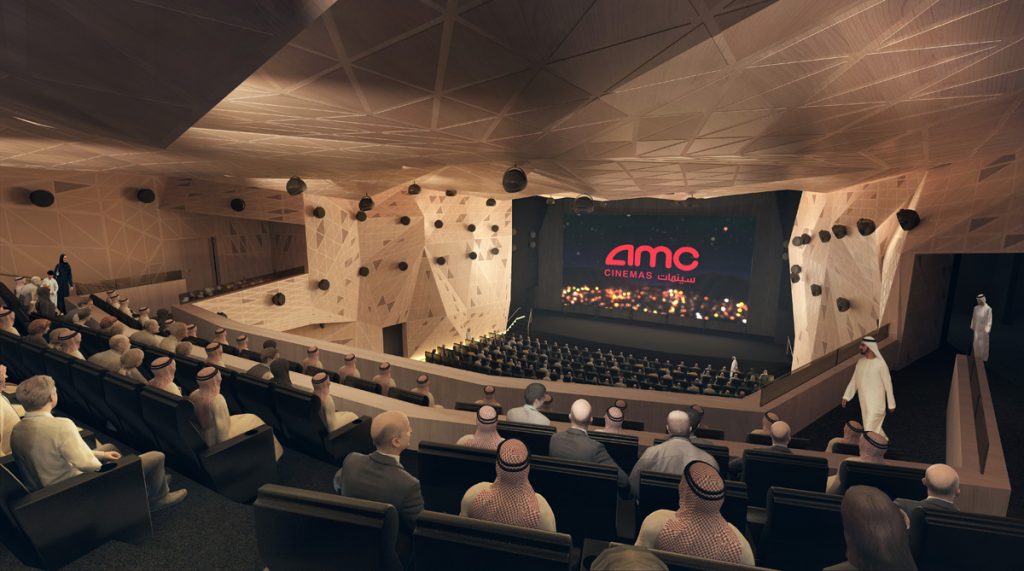 Saudi Arabia’s Ministry of Culture and Information announced the first cinema operating license to the Development and Investment Entertainment Company, a wholly owned subsidiary of the Public Investment Fund, enabling AMC Cinemas to open and operate in Saudi Arabia

Alongside this, the Saudi Ministry of Culture and Information has announced that it has granted the first cinema operating license to the Development and Investment Entertainment Company, allowing AMC to operate movie theatres in Saudi Arabia.

After a 35-year ban on cinemas in the Kingdom of Saudi Arabia, the Development and Investment Entertainment Company jointly with AMC will open its first theatre in Riyadh in the King Abdullah Financial District on April 18. This will be the first theatre to open in Saudi Arabia in several decades.

AMC is the world’s largest provider and operator of movie theatres. AMC’s entry into the Kingdom of Saudi Arabia is in concert with a key objective of Vision 2030, which is to grow the entertainment sector in Saudi Arabia. As a result, the cinema industry is expected to grow to around $1 billion in size over the coming years.

The Development and Investment Entertainment Company was fully incorporated early this year to play an active investment role in various areas of the entertainment sector, and seek to attract strategic partnerships to build the eco-system within the Kingdom.

About PIF
PIF seeks to become one of the largest and most impactful sovereign wealth funds in the world, enabling the creation of new sectors and opportunities that will shape the future global economy, while driving the economic transformation of Saudi Arabia.

To achieve this, PIF is building a world-class, diversified portfolio through investments in attractive, long-term opportunities across sectors and asset classes at both the domestic and international level. Working alongside global strategic partners and renowned investment managers, PIF acts as the Kingdom’s main investment arm to deliver a strategy focused on achieving attractive financial returns and long-term value for the Kingdom of Saudi Arabia, in line with Vision 2030.

In October 2017 at the Future Investment Initiative, the PIF Program (2018-2020) was launched as part of the Kingdom’s Vision 2030 Vision Realization Programs (VRP). The PIF Program is one of twelve VRPs and acts as a roadmap for the next three years to strengthen PIF’s position as the engine behind economic diversification in the Kingdom and role in transforming Saudi Arabia into a global investment powerhouse. The program will see PIF’s Assets Under Management increase to over $400 billion by 2020 and outlines how PIF aims to complement private sector development in the Kingdom through its new domestic investment, split between PIF’s Saudi Holdings, Saudi Sector Development, Saudi Real Estate & Infrastructure Development, and Saudi Giga-Projects.

About AMC
AMC (NYSE:AMC) is the largest movie exhibition company in the U.S., in Europe and throughout the world with approximately 1,000 theatres and 11,000 screens across the globe. AMC has propelled innovation in the exhibition industry by: deploying more plush power-recliner seats; delivering enhanced food and beverage choices; generating greater guest engagement through its loyalty program, web site and smart phone apps; offering premium large format experiences and playing a wide variety of content including the latest Hollywood releases and independent programming. AMC operates among the most productive theatres in the United States’ top markets, having the #1 or #2 market share positions in 22 of the 25 largest metropolitan areas of the United States, including the top three markets (NY, LA, Chicago). Through its Odeon subsidiary AMC operates in 14 European countries and is the #1 theatre chain in UK & Ireland, Italy, Spain, Sweden, Finland and the Baltic States. www.amctheatres.com.