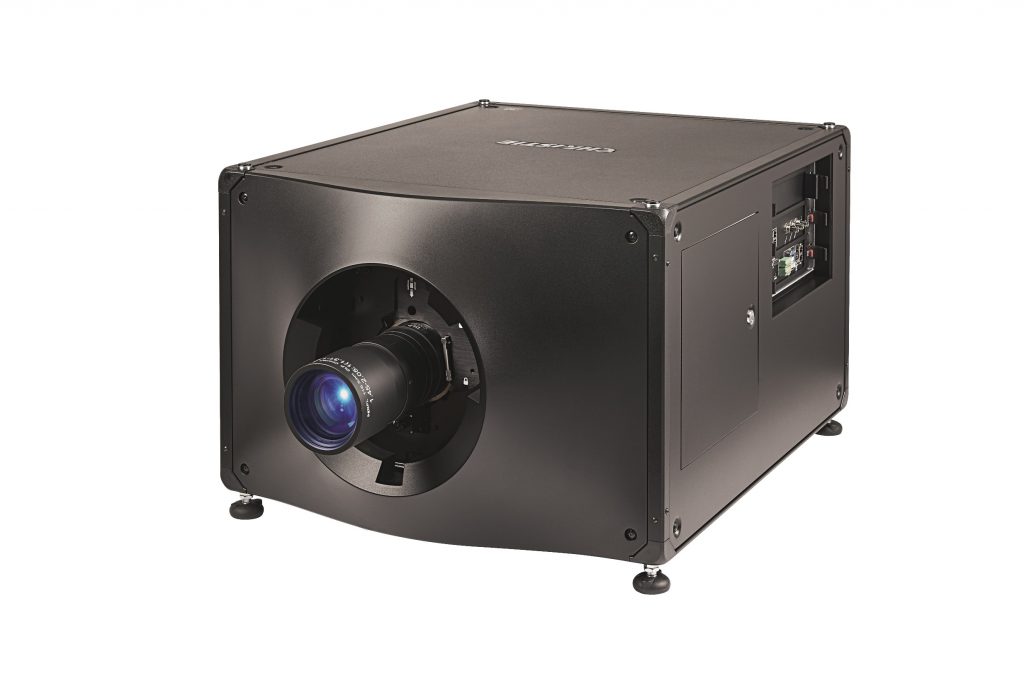 “With its innovative all-in-one, ‘next generation’ direct- coupled RGB illumination system, the Christie CP4235-RGB is the most advanced laser projector on the market,” said Allan Fernandes, senior manager, Product Management, Global Cinema, at Christie. “Using next generation, pure red-green-blue direct-emitting laser technology, the CP4325-RGB offers the most authentic and immersive cinema experience for the mainstream market. It offers all the advantages of a high-performance laser projector in a compact ‘all-in-one’ form factor that eliminates the need for sub-ambient external cooling, while providing rich colors, higher contrast ratios, and the lowest total cost of ownership of any projector in its class.”

Industry interest and endorsements roll in

Based on feedback gathered during recent factory tours, in-depth demonstrations and event showings to Christie’s global customer base, the CP4325-RGB promises to be a welcome addition to the cinema value chain, with exhibitors and post-production houses eager to put its potential to work. It is well-positioned to become the benchmark for laser-based cinema projection and exemplifies Christie’s technological leadership in the cinema market.

“Our longstanding, strategic relationship with Christie has delivered thousands of digital cinema projectors to theatres across China,” said Jack Wang, Chief Technical Officer, Wanda Cinemaline Corporation. “As we continue to grow our domestic cinema-market share, we are looking closely at the Christie CP4325-RGB RealLaser projector as a strong candidate for our lineup.”

“HOYTS Cinema Technology Group has always prided itself on introducing technologies that deliver the ultimate visuals for the best cinematic experience, witness our installation of the Christie CP42LH 3DLP 4K RGB laser projector for our 390-seat “Xtremescreen” premium auditorium in October 2016, at the HOYTS Chadstone complex,” said Adam Wrightson, General Manager, HOYTS Cinema Technology Group. “Given Christie’s pedigree and our reputation for innovation, it’s no wonder that HOYTS has already ordered several units of the Christie CP4325-RGB projector, which leverages the many features of the CP42LH but shrinks the footprint with a breakthrough-design that eliminates the need for external chillers,” Wrightson added.

“Our customers deserve the best, so to light up our Super EMAX theatre in Novi, Michigan, with its 92 ft (28 m) by 40 ft (12 m) screen, we’ve installed a Christie CP42LH 3DLP 4K RGB laser projector,” said David Zylstra, VP of Technology, Emagine-Entertainment. “But technology is always improving and so I’m delighted that, with the launch of the CP4325-RGB, Christie is introducing its RealLaser™ lineup of all-in-one projectors; a family which has the potential to ‘future proof’ our Novi and other auditoriums across the U.S. heartland.”

“The three CP42LH projectors we have installed so far in our premium auditoriums have given us an incredible competitive edge in the market,” said Luis Millán, owner of the Spanish cinema chain Odeon Multicines. “Our customers love the picture and really notice the difference in color saturation, clarity, brightness and higher contrast image quality. So we are looking forward to the launch of the CP4325-RGB with its innovative and compact form factor design that reduces system complexity and cost, while also providing a wide color gamut,” added Millán.

“Department of Post is an innovative, agile and collaborative post-house, aiming to provide filmmakers access to the best technology the world has to offer,” said James Gardner, CTO, Department of Post. “In keeping with our mission, the Christie CP4325-RGB RealLaser projector is an essential addition to our facility, with exceedingly accurate colour rendition, vivid black and white contrast and overall brightness that enables us to promise our clients the highest possible quality projection of their work in a professional environment,” said Gardner.

“The CP4325-RGB is the forerunner of a line of Christie RGB pure laser projection solutions intended for mainstream cinema applications and as such is an ideal replacement product for exhibitors wishing to upgrade existing installations, as well as for new-build cinemas and retrofits,” said Brian Claypool, vice president, Product Management, Global Cinema, at Christie.

“With its compact footprint, long operational life, increased performance capabilities and elimination of consumables, the CP4325-RGB is a game-changing proposition for mainstream auditoriums looking for a performance upgrade when investing in their next generation cinema experience, rather than settling for just a technology swap,” added Claypool.

Employing next-generation RGB pure laser devices, Christie’s advanced research and development teams have been able to eliminate the need for any external cooling, drastically reducing system complexity and cost, while ensuring an impressive and reliable operational life of more than 30,000 hours, with only a 20 percent loss in brightness over this time. The CP4325-RGB boasts a contrast ratio of up to 6000:1 and provides better uniformity and a wider color gamut than other cinema projection systems. In addition, the projector’s compact form-factor means that it can be easily integrated into standard cinema booths.

About Christie
Christie Digital Systems USA, Inc. is a global visual and audio technologies company and is a wholly-owned subsidiary of Ushio, Inc., Japan, (JP:6925). Consistently setting the standards by being the first to market some of the world’s most advanced projectors and complete system displays, Christie is recognized as one of the most innovative visual technology companies in the world. From retail displays to Hollywood, mission critical command centers to classrooms and training simulators, Christie display solutions and projectors capture the attention of audiences around the world with dynamic and stunning images. Visit www.christiedigital.com for more information.