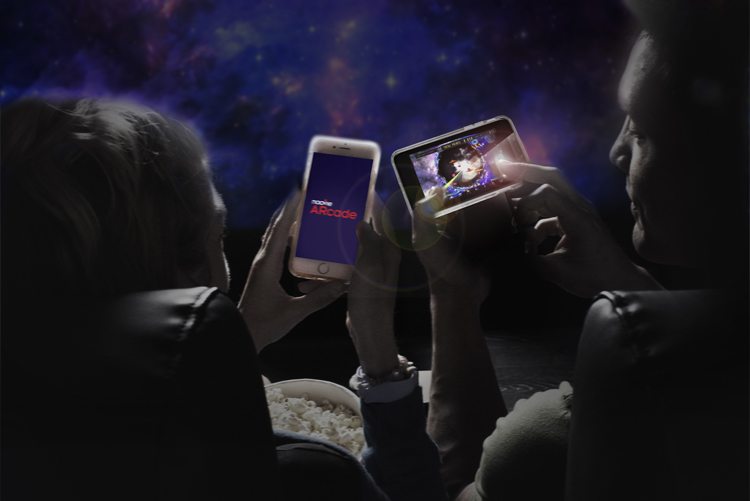 Noovie ARcade App is the First to Allow Movie Audiences to Play Augmented Reality (AR) Games on the Big Screen and Beyond; Moviebill “Connected Print” Magazine Will Also Put AR into the Hands of Moviegoers in Regal Entertainment Group Theaters

Noovie ARcade is available in the iOS and Android app stores. NCM expects it to be rolled out nationwide this spring on over 20,600 screens in 1,700 top theaters across the country including AMC, Cinemark, Regal Entertainment Group, and 49 other regional and local theater chains just in time for the start of blockbuster season.

To play, audiences only need to download the app and arrive at their local Noovie theater early to catch the Noovie pre-show, which will prompt them to take out their phone when it’s time to play. Then, the big screen and other triggers around the lobby will unlock larger-than-life games enabled by aiming their cell phone. Noovie ARcade is a fun way to compete with friends and other fans in the auditorium and across the country!

Noovie ARcade Games at Launch Will Include:

Noovie ARcade also creates new integrated cinema marketing opportunities that connect brands with movie audiences, including branded game experience customizations, digital ad inventory and real-time detailed auditorium-level audience data. The Noovie ARcade platform is designed to encompass a variety of game formats, including shooting, catching, tossing and driving games, and advertisers have the unique opportunity to work with NCM to create imaginative branded Noovie ARcade games for the big screen and beyond with select gaming experiences that can be triggered anywhere.

“Noovie was designed around the three pillars of content, commerce and gaming, and I’m very proud to introduce the first in-theater AR gaming experience to the industry,” said Cliff Marks, President of NCM. “Noovie ARcade drives fan engagement and excitement through a unique digital experience, which makes it not only great entertainment for movie audiences, but a great opportunity for brands looking to reach them. Hold on to your popcorn, because the movie experience just got a whole lot better!”

NCM is also putting AR directly into the hands of moviegoers in Regal Entertainment Group theaters through a sales agreement with Moviebill, the first ever augmented reality-driven “connected print” magazine. With Moviebill, opening weekend audiences for the biggest tent-pole movies can read and engage with exclusive content, special features and bonus material using their mobile phones and unlock a world of AR experiences from major studios and brands.

“NCM and Moviebill are working with advertisers to create custom activations that have full augmented reality capabilities within the Moviebill platform. With a seven-figure circulation commitment per edition, Moviebill will be one of the most highly circulated physical entertainment media outlets at launch to an audience of highly-desirable moviegoers,” said Ian Owen-Ward, EVP of Brand Partnerships at Moviebill.

Lawrence Snapp, NCM’s Chief Digital Officer & SVP, Corporate Development, noted, “Noovie ARcade interactive gameplay is the only immersive experience that ties the ubiquity of the smartphone to the magnitude of the movie screen, and shifts the Noovie experience from passive viewing to active gaming and play. It pulls people in, and excites and delights them in a way that is unique to the theater environment, which is tailor-made for such an immersive experience.”

“It also dovetails perfectly with our audience of young Millennial movie influencers in search of what’s next in entertainment,” Snapp continued. “Going to the movies provides a social and personal experience that they crave. Our audiences love their smartphones, our theaters, and compelling augmented reality games. For brands looking to interact with this key demographic of cord-nevers and cord-cutters, a movie theater AR experience is about as on-target as you can get.”

About National CineMedia (NCM)
National CineMedia (NCM) is America’s Movie Network. As the #1 Millennial weekend network in the U.S., NCM is the connector between brands and movie audiences. According to Nielsen, more than 710 million moviegoers annually attend theaters that are currently under contract to present NCM’s pre-show in 52 leading national and regional theater circuits including AMC Entertainment Inc. (NYSE: AMC), Cinemark Holdings, Inc. (NYSE: CNK) and Regal Entertainment Group (NYSE: RGC). NCM’s cinema advertising network offers broad reach and unparalleled audience engagement with over 20,600 screens in approximately 1,700 theaters in 187 Designated Market Areas (all of the top 50). NCM Digital goes beyond the big screen, extending in-theater campaigns into online and mobile marketing programs to reach entertainment audiences. National CineMedia, Inc. (NASDAQ: NCMI) own a 49.5% interest in, and is the managing member of, National CineMedia, LLC. For more information, visit www.ncm.com.