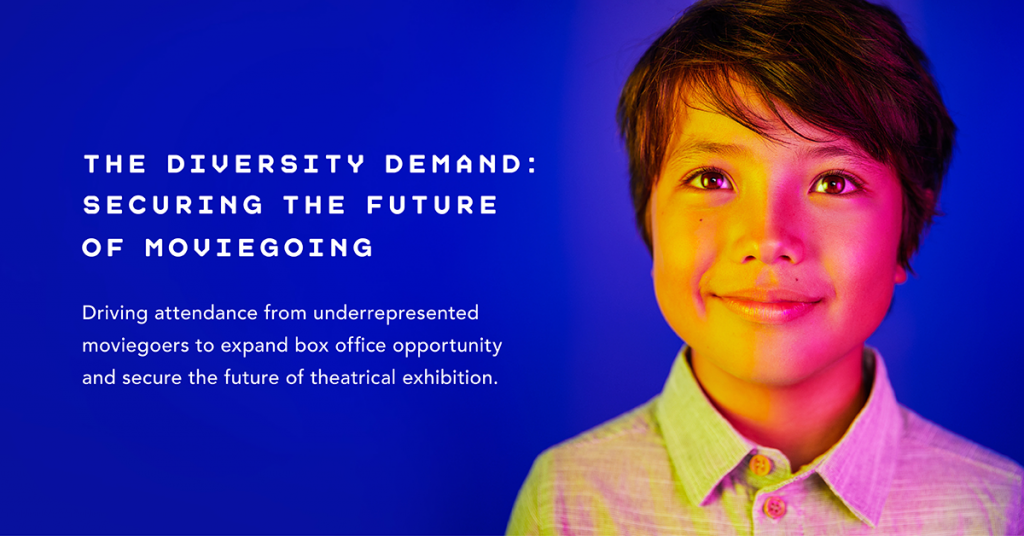 With both an increasingly diverse moviegoing audience and an increasingly diverse U.S. population, understanding how to attract diverse audiences will soon be paramount to the success of filmmakers and marketers, and to the sustainability of the exhibition sector. Movio’s recently released white paper, “The Diversity Demand: Securing the Future of Moviegoing”, examines how theatrical audience composition correlates to increased representation on screen, and if this suggests an opportunity to drive box office by producing content representative of audiences that have historically been underrepresented in film.

The analysis confirms a correlation between a minority group’s representation on screen and that group’s audience turnout, with some groups attending in numbers at more than twice the usual rate. The research also shows that increased representation of minority groups on screen can influence less engaged moviegoers within that demographic cohort to attend the theater.

As a cursory analysis, Movio selected several pairs of theatrically released films which would generally be considered “similar” in terms of both genre and budget. For each pair, one film featured an underrepresented lead or co-lead and the other film did not. The audience composition of each title was then analyzed by Movio’s data science team. Some highlights include:

“Movio’s ability to tie ticket purchases to individual moviegoers enables us to decipher the drivers of collective moviegoing behavior and to analyze attendance trends within demographic groups,” says Chief Commercial Officer and President of Movio Media Craig Jones, who will discuss the White Paper findings during his appearance at the upcoming New York Film Conference. “Today’s consumer has countless entertainment options, making it easier than ever for diverse audiences to find content that speaks to their tastes and experiences. If cinema is to remain relevant and continue having a cultural impact, it must attract these audiences by delivering more representative content.”

Discover all the insights and download the full white paper at: https://movio.co/nyfc

About Movio
Movio is the global leader in marketing data analytics and campaign management solutions, revolutionizing the way the film industry interacts with moviegoers. Movio is the world’s most comprehensive source of moviegoer data and has products designed specifically with the challenges of movie marketing in mind. Movie lovers at heart, it’s our mission to connect everyone with their ideal movie. Movio is a company of Vista Group International Ltd.