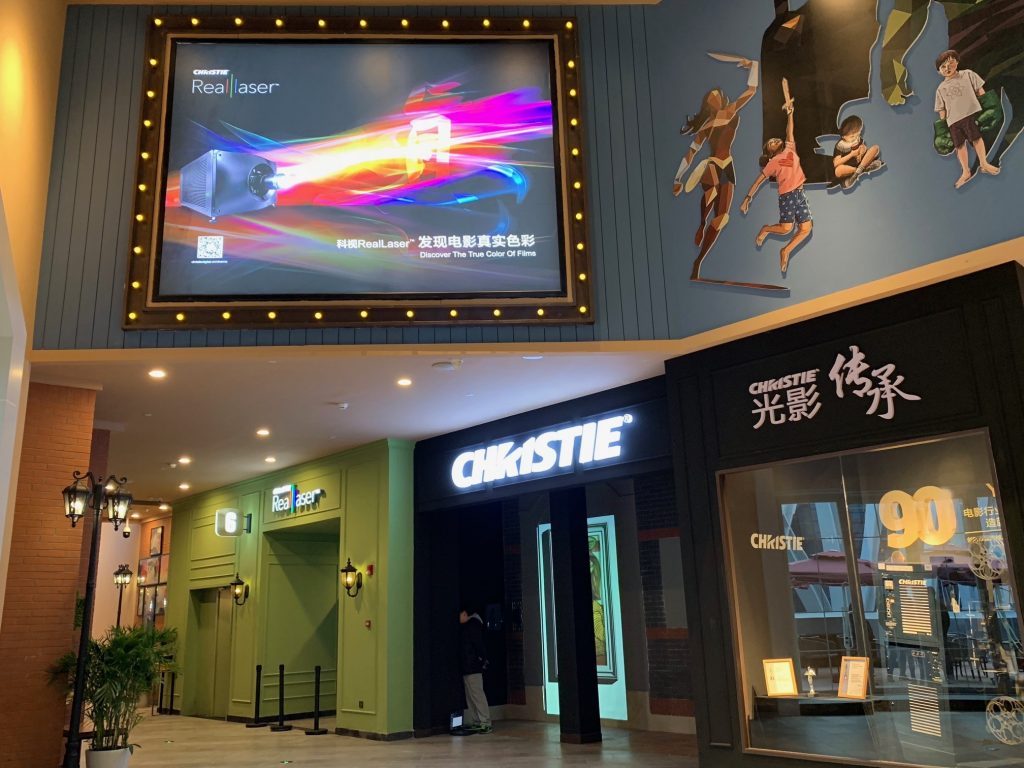 Christie, a leader in creating and sharing the world’s best visual and audio experiences, is pleased to announce that Huayi Brothers Cinemas has deployed Christie’s next-generation RealLaser cinema projectors at its flagship multiplex in Shanghai.

Located on the fifth floor of Parkside Joy City shopping mall in Putuo District, it is the first cinema complex opened by Huayi Brothers Cinema Investment Co., Ltd in Shanghai to be powered by Christie’s state-of-the-art, direct-coupled RGB pure laser projection systems. Eight of its well-appointed halls are equipped with Christie RealLaser cinema projectors, including the leading-edge 4K-resolution CP4325-RGB and 2K-resolution CP2320-RGB models, which are capable of delivering a much-increased color palette approaching Rec. 2020, and over 30,000 hours of theater operation without lamp changes.

“We are very pleased to open our first cinema complex in Shanghai and are fully committed to provide the best movie-going experience to our patrons, which is a key element of our success,” said Ge Liu, General Manager, Huayi Brothers Cinema Investment Co., Ltd. “In terms of projection, we wanted an advanced, future-proofed system that excels in image quality, operational lifetime and overall cost. Christie’s RealLaser cinema projectors not only met all our requirements, but also impressed us with a compact all-in-one form factor that allows for a seamless installation into any booth.”

Lin Yu, Vice President, Cinema Sales for Asia, Christie, commented, “Since the debut of our direct-coupled RGB pure laser projectors featuring CineLife electronics and RealLaser illumination, they have been well-received by exhibitors from all over the world. I’m delighted that Huayi Brothers Cinemas has acquired the CP4325-RGB and CP2320-RGB models for its flagship cinema in Shanghai. This latest rollout clearly validates our technological leadership in the cinema market and demonstrates the confidence that exhibitors have in our RealLaser cinema projectors, which dramatically lowers the cost of RGB laser ownerships ownership, while providing an unmatched cinematic experience to mainstream auditoriums.”

The CP4325-RGB projectors have been installed in three larger auditoriums, each fitted with 14-meter screens, including Hall 6 which has been named “Christie RealLaser auditorium”. The CP2320-RGB projectors are deployed in five medium-sized auditoriums (including two luxuriously-furnished “director’s halls” featuring adjustable, ergonomic sofa seats and extra legroom) with an average screen size of 10 meters.

Audiences entering the cinema lobby are also greeted by two large wall posters highlighting Christie’s long-standing heritage in cinema and the latest RealLaser illumination technology, which reproduces images that outperform DCI standards. As well, a unique display zone has been set up in the lobby area next to Hall 6 to showcase Christie’s legacy of cinema innovations. These include the legendary Christie P35 film projector, the two Academy Awards for Technical Achievement that the company won in 1988 and 1993, and an enlightening live projection showcase featuring Christie’s history, various achievements in cinema, and the ground-breaking RealLaser technology.

The cinema complex features a circular-shaped lobby resembling a traveling pathway that leads visitors to every auditorium. The pathway connects the ticketing booth and candy bar with the cinema halls, serving as a conduit that invites audiences to embark an exciting journey of movie exploration. The design concept is focused on the comfort of the movie-goers – the overall lighting is set up in such a way that they can easily adapt from brightly-lit pathway to the darkened cinema halls.

Christie’s RealLaser family of projectors offers all the advantages of RGB pure laser in a compact “all-in-one” form. This eliminates the need for sub-ambient external cooling, which further reduces operational cost. Christie RealLaser consistently delivers excellent image quality and brightness above DCI standards throughout the projector’s natural life. All this while providing 30,000-plus hours of operation and without lamp changes.

Since their official launch, the CP4325-RGB and CP2315-RGB have been embraced by exhibitors around the world as the best replacements for lamp-based projection systems and new installations. In Asia, these include China’s Wanda Cinema Line, Taiwan’s Vieshow Cinemas, Showtime Cinemas, and Cinemark Cinema, Australia’s HOYTS Cinemas, Thailand’s Major Cineplex, and Indonesia’s Cinema 21.