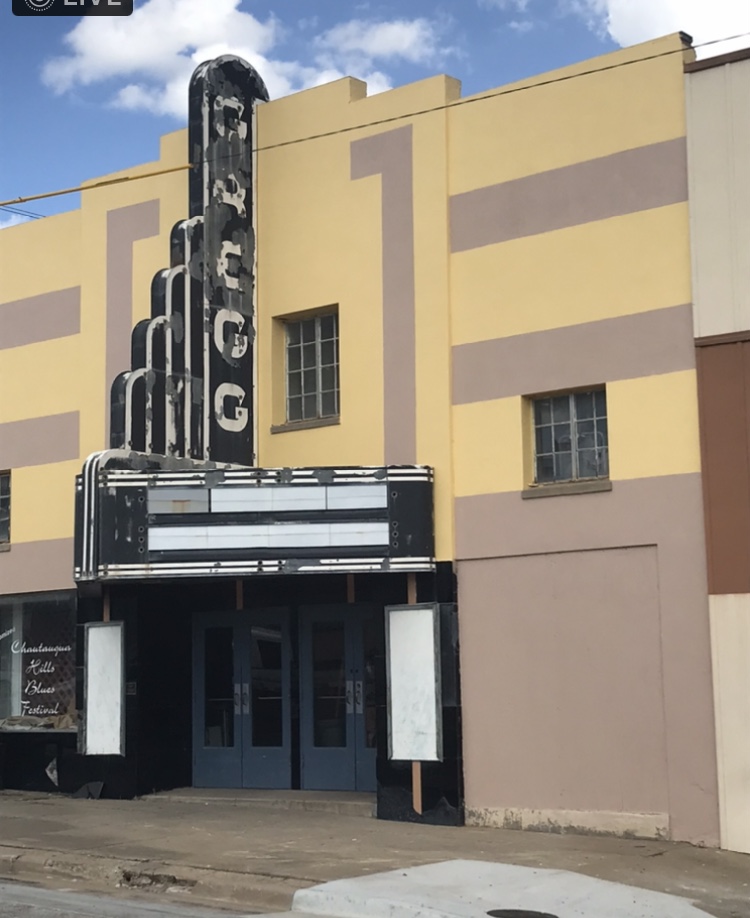 The Gregg Theater in Sedan, Kansas, is preparing to open its doors once again thanks to a dedicated team of local volunteers and some help from Christie’s Professional Services team.

First opened in August 1938, and featuring a beautiful marquee, the Gregg Theater was one of the first theaters to introduce “talkies” or talking pictures. It was remodeled over the years, and a new, larger projection screen was installed in 1947. In 1991, Roger Floyd and The Sedan Theatre Group took over, updating and restoring the theater, and in 2014, replaced the 35mm film projector with a digital cinema projector. The single-screen theater remained a hub for the small community of approximately 1,000 people.

But in the Spring of 2021, the IMB for the projector had stopped working and as a result, the theater was going to be closed. But Sedan resident Toni Nusz took on the challenge: “I wanted to get theater back on track. Next thing I knew, Roger [Floyd] was donating the theater to the Sedan Area Economic Development Committee, with me as the director.”

To bring the theater back into working order, significant improvements were needed – cleaning, painting, restorations, and not least of all – getting the projector back in operation. When the Gregg Theater shut down due to the pandemic, the security battery died in the IMB. To get the projector working – and able to show DCI-compliant films – the board in the IMB would need to be replaced. As a single-screen, volunteer-run theater, the Gregg didn’t have the budget to fix the IMB.

“A friend, who grew up in Sedan and enjoyed many hours at the theater, came home for a visit and offered to help. He reached out to Bryan Weil at Christie, who was a huge help in facilitating the correct parts to get our projector working again,” says Nusz.

“I knew there was a way we could swap out the board, and help to get them back up and running,” says Bryan Weil, account manager, Professional Services, Christie. “The small independent theaters are the backbone of the cinema industry; we saw a need to do something for The Gregg. Christie Professional Services sent them a new board to get the projector working once again.”

“The projector was the biggest issue,” says Nusz. “If that couldn’t be fixed the rest of the work would have been a moot point.”

With the projector lighting up the screen at the Gregg Theater again, it provided the added momentum to refresh the building. “The community has shown tremendous enthusiasm and encouragement in the upgrading of the theater. Many had stated to me that they were worried about it declining to the point it would be impossible to bring it back. Several have spoken to me about their excitement at getting their evenings or afternoons out again,” says Nusz. “I think there has been a definite increase in community betterment since the projector was fixed.”

“The Gregg Theatre is a pillar in the community of Sedan, Kansas,” says Weil. “We’re committed to the success of the cinema industry – Christie’s history goes back to 35mm film projectors – so when we have an opportunity to impact not just a theater, but a town, we’re there to help.”

Restoration to the Gregg Theater continues, with new seats, floors, paint, and a great deal of help from the community. The theater is preparing to show films on the big screen once again in late 2021.

About Christie
Christie Digital Systems USA, Inc. is a global visual and audio technologies company and a wholly owned subsidiary of Ushio Inc., Japan (JP: 6925). Christie revolutionized the movie industry with the launch of digital cinema projection, and since 1929 has embraced innovation and broken many technology barriers. Our technology, paired with the support of professional services to design, deploy and maintain installations, inspires exceptional experiences. Christie solutions are used around the world, from the largest mega-events to the smallest boardrooms, and include advanced RGB pure laser projection, SDVoE technology, content management, image processing, LED displays, and Christie CounterAct far-UVC disinfection solution with patented Care222® technology. Visit www.christiedigital.com.