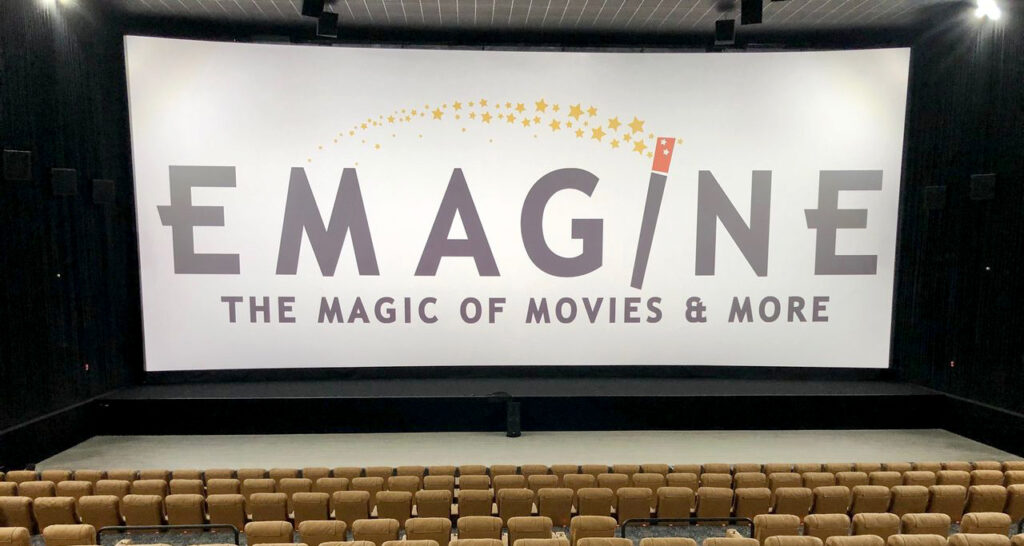 The New Mobile Application Will Launch in Quarter One of 2023

Emagine Entertainment, Inc., an innovator in luxury theatres, has announced a new partnership with Influx, a leading provider of guest-facing cinema technology solutions, to create an industry leading new mobile app experience for Emagine guests. The new mobile app is currently under development and expected to launch in the 1st quarter of 2023.

The new, best-in-class mobile app for iOS and Android devices, will feature a host of functions to enhance the moviegoing experience for Emagine guests. The apps will offer options designed to perform a seamless transaction integrating ticketing and online food ordering, along with a host of other convenient options and technologies that will make going to Emagine the best experience possible.

“We are eager to introduce our new app experience to our guests,” said Anthony LaVerde, CEO of Emagine Entertainment. “Along with Influx, we are designing what we believe to be the ultimate app platform that will put a variety of functionality and usability in the palm of our guests’ hands. When this app launches it will be transformative for our guest experience.”

“Technology and data can and will help movie theaters build on the recent surge that we are witnessing this summer. We’re excited to bring our best solutions to Emagine and deliver a world-class mobile app for their guests, who now expect more from a visit to the cinema,” said Harish Anand Thilakan, CEO of Influx.

About Emagine Entertainment
Emagine Entertainment’s affiliates own and operate luxury theaters in Michigan, Illinois, Indiana, Minnesota, and Wisconsin. Emagine operates theaters with a combined 30,068 seats and 342 screens. Emagine led the way in bringing luxury theaters to the metropolitan Detroit market. Emagine enjoys the honor and distinction of being named “Best Movie Theater” for several years running by the Detroit Free Press, the Detroit News, and WDIV television. Emagine has been named “Best Theater to See a First-Run Movie” by Hour Detroit Magazine consecutively for the past 9 years.

Emagine is a recognized innovator in the theatrical exhibition industry having been the first theater chain in the world to convert to 100% digital projection. In 1997, Cinema Hollywood (now Emagine Birch Run) was the first theater in Michigan to open with all stadium seating. Emagine was the first to introduce 4K projection to the Detroit market, and it boasted 3 of the first 100 Dolby Atmos immersive sound systems deployed worldwide. On December 15, 2017, Emagine began operating the largest movie screen in the State of Michigan with the opening of its Super EMAX auditorium (featuring laser projection technology) at its megaplex in Novi, Michigan; and on December 19, 2019, Emagine opened the largest CinemaScope screen in the Midwest at its Emagine Canton/Westland location. Paul Glantz, Chairman of Emagine Entertainment, has been interviewed on CNN concerning his views and opinions on the operation of luxury theaters. On February 28, 2018, Emagine Entertainment, Inc., and 7-time BET Award-winning and Grammy nominated superstar Big Sean (Sean Anderson) announced their joint venture agreement to develop, Sean Anderson Theatre, powered by Emagine, a world-class cinematic and live music entertainment center in Detroit (and potentially at other sites around the U.S.). The new partnership is actively scouting prospective sites in Detroit. For more information, please visit www.emagine-entertainment.com

About Influx
With cinema partners worldwide, Influx is the leading provider of guest-facing technology for movie theaters. Powered by its middleware Injin, Influx delivers cinema websites, mobile apps and kiosks with cutting edge features and modules that help exhibitors sell more online, drive loyalty and create operational efficiencies. More recently, Influx launched Ingage, its guest data analysis and engagement automation platform and InTake, a food and beverage ordering microsite which can be easily added on to any cinema’s existing website or mobile app.