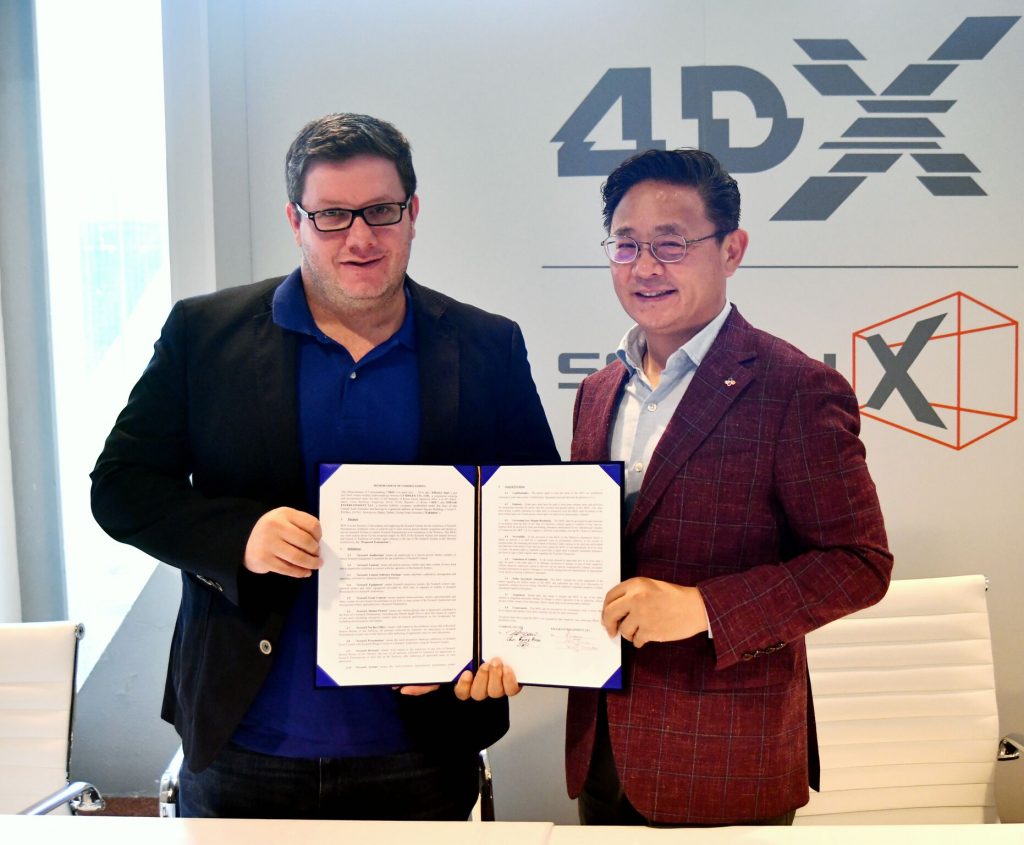 At CineEurope this week, CJ 4DPLEX announced a new partnership with Reel Cinemas, the ultimate destination for movie-lovers in the UAE by Emaar Entertainment, to bring the first ScreenX – the world’s first multi-projection system that provides a 270-degree panoramic film viewing experience within a theatre setting – to the UAE. It will be among the first ScreenX screens ever in the Middle East. The new ScreenX screen will open at the Reel Cinemas in The Dubai Mall, the world’s largest and most visited retail and entertainment destination, which welcomes over 80 million visitors every year.

Damien Latham, CEO of Emaar Entertainment, said: “At Reel Cinemas, we are constantly redefining our visitor’s experience by introducing world’s first technologies. ScreenX will be a leading addition to our technology showcase that assures a stunning 270-degree panoramic film viewing experience that will further cement our market leadership. This is part of the transformation we are bringing across our cinemas by bringing innovative technology to the region first.”

Setting a new standard for cinema experiences with its flagship megaplex at The Dubai Mall, Reel Cinemas has continued to redefine the cinematic landscape. Reel Cinemas also has a boutique cineplex at Dubai Marina Mall as well as the region’s first dine-in cinema – the Guy Fieri’s Kitchen & Bar and Dine-in Cinema by Reel Cinemas at Jebel Ali Recreation Club.

“We are excited to announce that we have expanded ScreenX footprint to the UAE with Reel Cinemas,” said Byung-Hwan Choi, CEO of CJ 4DPLEX.“Opening the first site at The Dubai Mall, we will deliver unmatched cinematic experience that will transform the movie-going experience in the UAE.”

About ScreenX
ScreenX is the world’s first multi-projection system used within a theatre setting. It was created in 2012 by CJ CGV, part of South Korean conglomerate CJ Group, as one of the “next cinema formats” along with 4DX, the multisensory cinema technology with motion and environmental effects. ScreenX allows moviegoers to go beyond the frame of the movie screen by utilizing a proprietary system that expands images of feature films and pre-show advertising to create an immersive, panoramic, 270-degree format that projects onto three theatre walls. To date, ScreenX has been installed in 142 screens around the world.

About Reel Cinemas
Emaar Entertainment, the pioneer of innovative entertainment, leisure and retail concepts in the region, owns and manages Reel Cinemas, the ultimate destination for movie-lovers in the UAE.

Setting a new standard for cinema experiences with its flagship megaplex at The Dubai Mall, Reel Cinemas has continued to redefine the cinematic landscape, with a boutique cineplex at Dubai Marina Mall as well as the region’s first dine-in cinema at Jebel Ali, marking the partnership with international celebrity restaurateur, Guy Fieri.