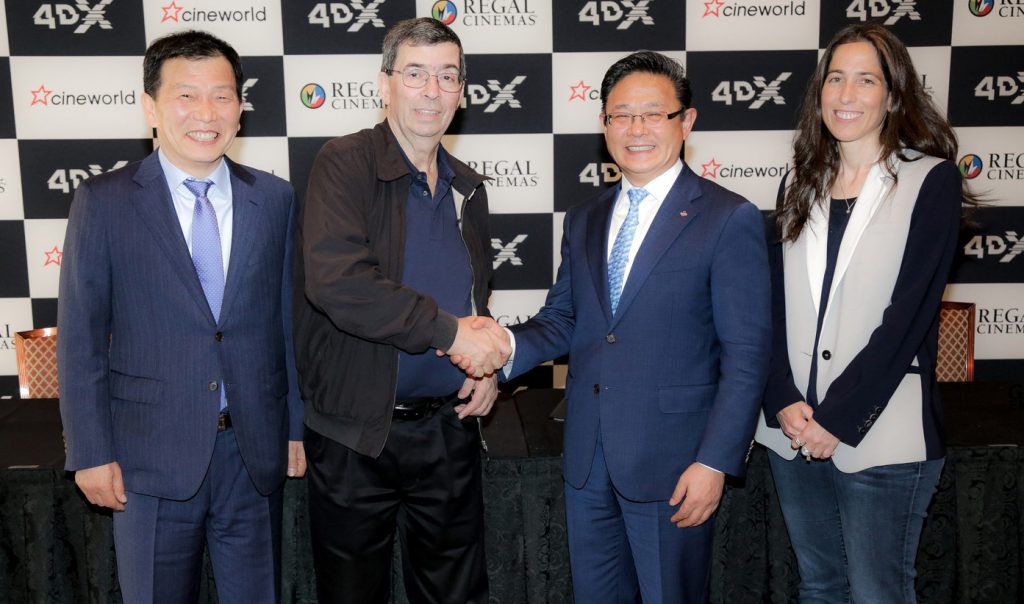 85 4DX Locations in the U.S. and 60 in European Nations to be Accumulated in the New International Rollout Plan, Across Regal Entertainment, Cineworld Cinemas and Cinema City Venues

CJ 4DPLEX, the world’s leading 4D cinema company, and Cineworld Group plc have expanded their partnership to bring the immersive 4DX technology to theatres across the U.S. and EMEA regions. As a result of this agreement, there will be 145 total 4DX auditoriums across Cineworld Group’s worldwide footprint, adding 79 Regal Entertainment locations in the U.S and 20 Cineworld Cinemas and Cinema City theatres across Europe and the Middle East.

This marks a major expansion of 4DX – the fastest-growing premium cinema format, featuring motion seats and environmental effects that add to the moviegoing experience. It also significantly builds on the relationship between its creator, CJ 4DPLEX, and Cineworld, which combined with Cinema City International in 2014, and completed its acquisition of Regal Entertainment earlier this year. Cinema City was the start of the relationship between the two companies when, in 2012, the exhibitor opened the group’s first 4DX in Israel and has constantly developed since.

There are currently six Regal 4DX locations in the U.S. Today’s news expands the rollout plan from 15 to 79 additional Regal theatres across the country. Already confirmed markets in the partnership include Atlanta, Chicago, Jacksonville, Honolulu, Philadelphia, Houston, Irvine, Nashville, Miami and San Diego. The new deal will brings the total of 4DX locations set to be opened in the coming years to 85.

Across Cineworld Cinemas and Cinema City-branded theatres, there are currently 40 4DX locations: 16 in the UK, six in Poland, five in Romania, four in Israel, three each in Hungary and the Czech Republic, two in Bulgaria and one in Slovakia. In addition to this, 20 more 4DX sites will be expanded across the EMEA regions to complete 60 remarkable 4DX locations.

“The success we have seen so far in this with this partnership has been outstanding and we expect our moviegoers will continue to seek out the newest titles in 4DX. Being at the edge of cinema exhibition is always a goal and working with CJ 4DPLEX is one of the ways we can deliver future-thinking cinema experiences to our audience members.” said Mooky Greidinger, CEO of the Cineworld Group.

4DX – which incorporates features effects such as motion, vibration, rain, wind, bubbles, lightning, scent and more into popular movies to bring fans into the action – recently became the fastest premium cinema format to hit the 500 location milestone (link to release). Since debuting in 2009, more than 480 Hollywood titles have been screened utilizing the popular, immersive technology.

“Cineworld continues to be an excellent partner and by further adopting 4DX at even more locations in the US, it shows that the company has a commitment to bringing its patrons the most advance cinema experience possible,” said Byung Hwan Choi, CEO of CJ 4DPLEX.

About CJ 4DPLEX
CJ 4DPLEX is the world’s first 4D cinema company, headquartered in Seoul with international offices in Los Angeles and Beijing. The company created 4DX, the first and leading 4D cinema technology for feature films, providing moviegoers with an immersive cinematic experience that utilizes all five senses, allowing the audience to connect with movies through motion, vibration, water, wind, snow, lightning, scents, and other special effects that enhance the visuals on-screen. CJ 4DPLEX brings 4DX auditoriums to exhibition partners along with 4DX codes for both major Hollywood blockbusters and local titles. Each auditorium incorporates motion-based seating synchronized with more than 20 different effects and optimized by a team of skilled editors, maximizing the feeling of immersion within the movie, beyond the limits of audio and video. Since 2009, more than 520 Hollywood and local titles have been screened in 4DX. As of April 2018, more than 61,000 4DX seats operate in 500 auditoriums spanning 58 countries. CJ 4DPLEX was named a Most Innovative Company of 2017 in Live Events by Fast Company. The company was awarded the Silver Edison Awards in the Media and Visual Communications-Entertainment category in 2015 and 2018. For more information, please visit www.cj4dplex.com.

About Cineworld Group
Cineworld Group was founded in 1995 with its roots going back to 1930 through the combination with Cinema City in 2014. In December 2017, Cineworld acquired US cinema chain Regal Entertainment Group. Following completion of the deal in February 2018, the enlarged Group became the second largest cinema chain in the world, with 9,538 screens across the US and Europe. Cineworld is operating cinemas today in ten countries: the US, the UK, Ireland, Poland, Romania, Israel, Hungary, Czech, Bulgaria and Slovakia, covering a market of approximately 500 million people. The acquisition of Regal provides Cineworld with a major presence in the US cinema market, the largest box office market in the world. Cineworld’s primary brands are Regal (in the US), Cineworld and Picturehouse (in the UK & Ireland), Cinema City (throughout Europe) and Yes Planet (throughout Israel).

We believe that the size, reach and quality of Cineworld’s theatre circuit provides its patrons with a convenient and enjoyable movie-going experience. We are committed to being ‘The Best Place to Watch a Movie!’ More information can be found at www.cineworld.com