Cineworld to Launch 100 ScreenX Locations Across the U.S. and Europe, Marking Significant Expansion of the Immersive Movie Environment 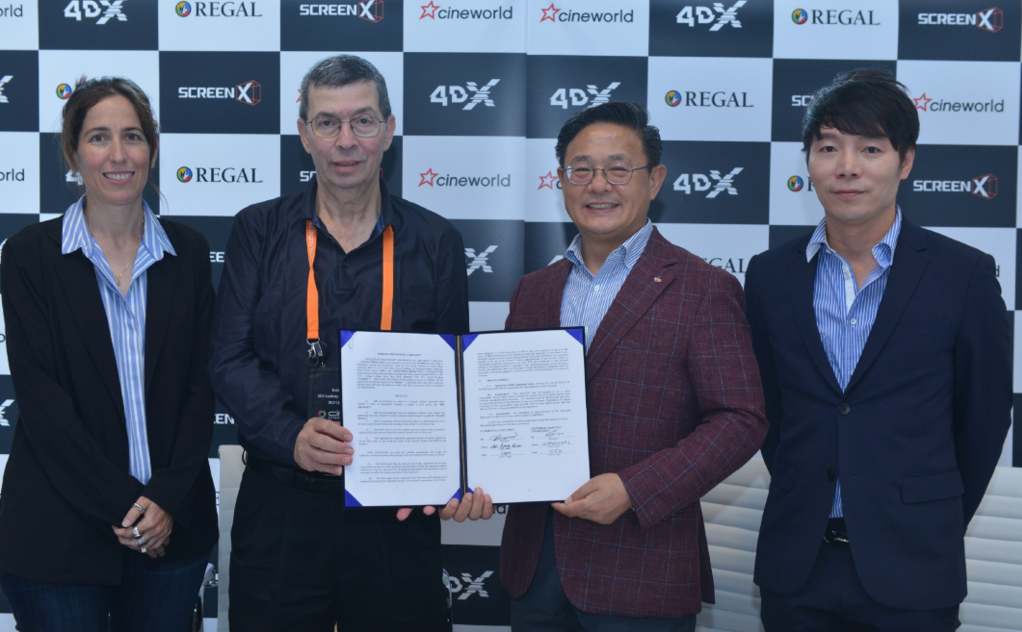 CJ 4DPLEX has announced today a partnership with Cineworld Group to open 100 ScreenX locations at its theatres in the next few years. This agreement, which marks a major milestone for both companies, will include installing the multi-projection cinematic system in 10 different countries: U.S., U.K., Israel and seven other European countries.

This marks a major expansion for ScreenX, an immersive, 270-degree panoramic film-viewing experience that extends the screen to the auditorium walls, allowing for more creative possibilities. The three-sided theatre format expands feature films to give moviegoers the most immersive experience possible.

ScreenX has quickly and effectively increased its international reach, successfully screening both Hollywood blockbusters and local feature films alike. Past titles from major Hollywood studios to be released in the premium format include: “King Arthur: Legend of the Sword,” “Pirates of the Caribbean: Dead Men Tell No Tales,” “Kingsman: The Golden Circle,” “Black Panther” and “Rampage,” with upcoming releases to include “Ant-Man and the Wasp,” “The Nun,” “Aquaman,” “Shazam!” and additional titles to be announced.

“Our relationship with CJ 4DPLEX goes beyond accelerating the installation of new 4DX and ScreenX locations around the world, to a shared vision of the future of immersive cinema,” said Mooky Greidinger, CEO of the Cineworld Group. “We are committed to maintaining a premium moviegoing environment at all of our locations in all regions, and the adoption of the most innovative cinema technologies is key to bringing our customers the best experience possible.”

“Cineworld continues to prove that it understands the formula for success as we look to the future of the movies,” said Byung-Hwan Choi, CEO of CJ 4DPLEX. “We are proud to build on this partnership and very excited to bring a record number of major studio releases to a growing number of ScreenX locations that we know will thrill attendees.”

Previously-opened U.S. ScreenX locations include two in the Los Angeles area, one in Las Vegas and 139 more locations across the globe. In the past year, the number of ScreenX auditoriums has increased exponentially. With additional auditoriums expected to open up across China, Japan, Korea, Southeast Asia, France, Switzerland, Turkey, Middle East and LATAM, it is expected to operate over 200 screens by the end of 2018 – more than 30% growth compared to 2017. This includes the recently announced largest ScreenX auditorium in the world, opening this summer at a B&B Theatres location in Liberty, Kansas City.

This partnership signifies a major expansion of the ScreenX franchise. Cineworld has previously partnered with ScreenX’s parent company, CJ 4DPLEX, to open up to 145 4DX locations across the U.S and Europe. This marks an additional increment of 99 screens from the already existing 46 locations spread throughout the U.S. and Europe.

About ScreenX
ScreenX is the world’s first multi-projection system designed to enhance the cinematic immersiveness of the theatre setting. It was created in 2012 by CJ CGV, part of South Korean conglomerate CJ Group, as one of the company’s industry-changing “next cinema formats”, alongside 4DX, the global-leader in multisensory cinema technology with motion and environmental effects. ScreenX allows moviegoers to experience beyond the frame of the movie screen by utilizing a proprietary system that expands images of feature films and pre-show advertising to create an immersive, panoramic, 270-degree format that projects onto three walls of theaters. To date, ScreenX has been installed in more than 142 screens around the world, including 86 screens in South Korea; 44 screens in China; 3 in the United States; 4 in Turkey; 2 in Vietnam and 1 in Thailand, Japan, and Indonesia.

About CJ  4DPLEX
CJ 4DPLEX is the world’s first 4D cinema company, headquartered in Seoul with international offices in Los Angeles and Beijing. The company created 4DX, the first and leading 4D cinema technology for feature films, providing moviegoers with an immersive cinematic experience that utilizes all five senses, allowing the audience to connect with movies through motion, vibration, water, wind, snow, lightning, scents, and other special effects that enhance the visuals on-screen. CJ 4DPLEX brings 4DX auditoriums to exhibition partners along with 4DX codes for both major Hollywood blockbusters and local titles. Each auditorium incorporates motion-based seating synchronized with more than 20 different effects and optimized by a team of skilled editors, maximizing the feeling of immersion within the movie, beyond the limits of audio and video. Since 2009, more than 520 Hollywood and local titles have been screened in 4DX. As of May 2018, more than 62,800 4DX seats operate in 524 auditoriums spanning 59 countries.

About Cineworld Group plc
Cineworld Group was founded in 1995 with its roots going back to 1930 through the combination with Cinema City in 2014. In December 2017, Cineworld acquired US cinema chain Regal Entertainment Group. Following completion of the deal in February 2018, the enlarged Group became the second largest cinema chain in the world, with 9,538 screens across the US and Europe. Cineworld is operating cinemas today in ten countries:  the US, the UK, Ireland, Poland, Romania, Israel, Hungary, Czech, Bulgaria and Slovakia, covering a market of approximately 500 million people. The acquisition of Regal provides Cineworld with a major presence in the US cinema market, the largest box office market in the world. Cineworld’s primary brands are Regal (in the US), Cineworld and Picturehouse (in the UK & Ireland), Cinema City (throughout Europe) and Yes Planet (throughout Israel).

We believe that the size, reach and quality of Cineworld’s theatre circuit provides its patrons with a convenient and enjoyable movie-going experience. We are committed to being ‘The Best Place to Watch a Movie!’ More information can be found at www.cineworld.com.