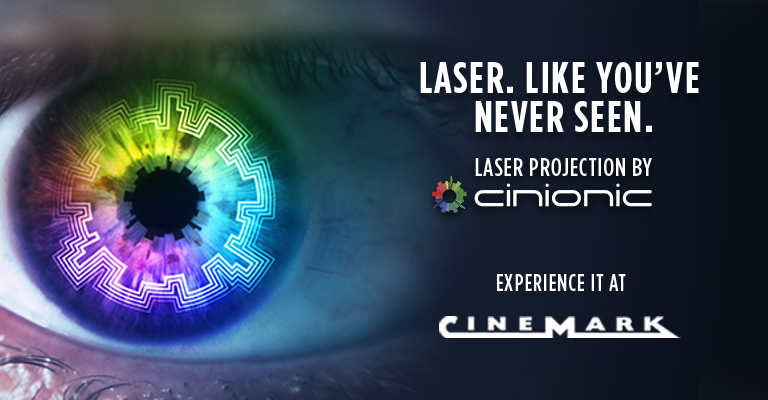 Dallas, TX (August 25, 2021) – Cinionic, the Barco cinema joint venture, and Cinemark (NYSE: CNK) today announce their campaign to educate audiences about laser as part of the renewed and exclusive 10-year partnership to power all of Cinemark’s screens, representing nearly 6,000 screens across the globe, with the leading laser projection solutions by Cinionic. Most recently, Cinemark and Cinionic upgraded 24 locations in the Dallas-Fort Worth area to all-laser multiplexes marketed by the new laser campaign, offering audiences an elevated moviegoing experience in every auditorium.

The new moviegoer campaign harnesses the tagline “Laser. Like you’ve never seen” and comes at a time as the cinema industry seeks to drive audiences back to the movies. Focusing on the benefits for moviegoers, the laser campaign highlights how laser projection by Cinionic helps deliver consistently bright, colorful, and sharp images. Today’s announcement celebrates another milestone in the long-standing partnership between Cinemark and Cinionic to create memorable cinema moments powered by the leading cinema solutions.

“Cinionic has been such a tremendous partner over the years, and we are thrilled to continue our relationship with them as we strategically convert our digital xenon projectors to laser over the course of the next ten years,” stated Damian Wardle, Cinemark’s EVP Theatre and Technology Operations. “I’m incredibly proud of our team in defining and executing our laser conversion strategy, which provides a better overall consumer experience with vivid colors and on-screen imagery while providing meaningful cost savings for the company.”

In 2019, the two companies continued their journey, and upgraded Cinemark locations with award-winning Barco Series 4 laser projectors and integrated Barco Alchemy media servers. The release of the laser moviegoer campaign solidifies both companies’ ongoing commitment to transform Cinemark’s fleet in the United States and Latin America into laser-powered entertainment destinations.

“Our long-term ambition is to drive audiences to theaters with the leading solutions and consumer marketing that excites, inspires, and motivates. Through our long-standing partnership with Cinemark, and our ability to deliver a laser solution for every screen, we continue differentiate cinema for the next generation,” added Wim Buyens, Cinionic’s CEO. “Cinemark is renowned for its operational excellence, exceptional presentation, and commitment the moviegoer journey, now with laser projection by Cinionic.”

Cinemark audiences in the Dallas-Fort Worth metroplex will encounter the “Laser. Like You’ve Never Seen” campaign throughout their cinema journey, with placements online, on social media, in-theater, and on-screen with a new pre-show spot running in auditoriums featuring laser projection by Cinionic. The campaign is expected to roll out to additional markets as they are converted to all-laser as part of Cinemark and Cinionic’s latest 10-year partnership.

About Cinemark
Headquartered in Plano, TX, Cinemark (NYSE: CNK) is one of the largest and most influential movie theatre companies in the world. Cinemark’s circuit, comprised of various brands that also include Century, Tinseltown and Rave, operates 521 theatres with 5,864 screens in 42 states domestically and 15 countries throughout South and Central America. Cinemark consistently provides an extraordinary guest experience from the initial ticket purchase to the closing credits, including Movie Club, the first U.S. exhibitor-launched subscription program; the highest Luxury Lounger recliner seat penetration among the major players; XD – the No. 1 exhibitor-brand premium large format; and expansive food and beverage options to further enhance the moviegoing experience. For more information go to https://investors.cinemark.com/

With more than 95,000 projectors installed globally, Cinionic is trusted by more than 200 exhibitors to help capture audiences at multiple touchpoints in their cinema journey and keep them coming back for more. Today, more than half of the world’s movie theaters are illuminated by Cinionic.

Cinionic has offices in Belgium, the United States, Mexico, Australia, and Hong Kong.