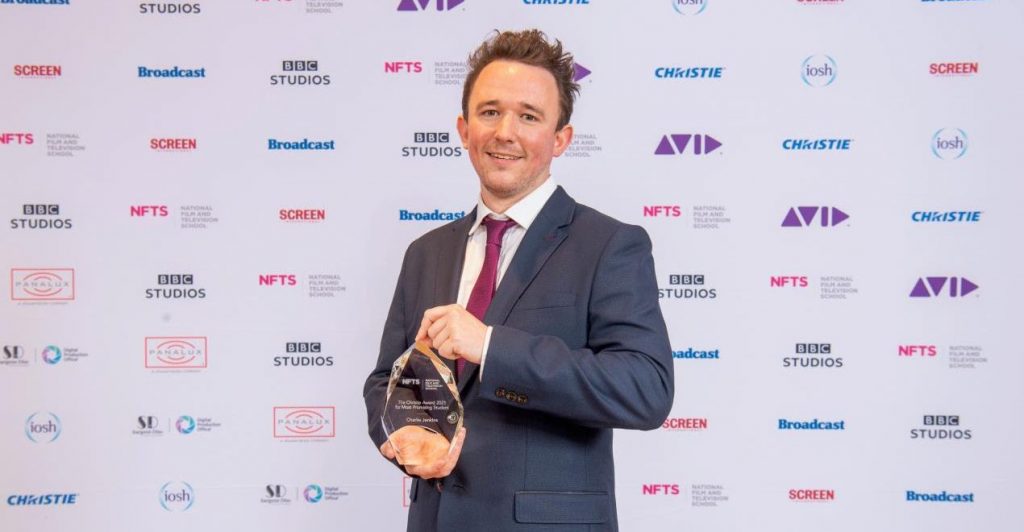 In partnership with the National Film and Theatre School (NFTS), this year’s coveted Christie prize for ‘Most Promising NFTS Student’ was awarded to Charlie Jenkins, NFTS Graduate in Cinematography. Charlie received a monetary prize, a certificate, and a crystal trophy to celebrate the win at the socially distanced graduate ceremony. It is the 16th year of Christie’s partnership with NFTS, having supported the School with a variety of initiatives designed to nurture students and develop facilities, including its upgrade from film to digital projection equipment.

Oliver Stapleton and Stuart Harris, co-heads of the NFTS Cinematography MA commented: “Charlie Jenkins is an exemplary student whose helpfulness to others knows no bounds. As soon as the School re-opened after lockdown, he immediately went to work and assisted the Animation, Model Making and Cinematography departments in the complicated wiring and computer dimming systems needed to produce the Animation films. His positive attitude and immense creativity make him a more than worthy winner of this special award.”

This year, the students were faced with additional logistical challenges to complete their films, and NFTS was among the first film schools to successfully return to production in June 2020 following strict Covid-19 filming guidelines. Graduates’ films will be showcased for four consecutive days at London’s BFI Southbank in all four of its screens, including the recently re-opened NFT1, which has been fitted with a Christie RGB pure laser projector and Christie Vive Audio, as part of a project to upgrade and improve the 450 seat cinema during the most recent lockdown. Charlie worked as cinematographer on “Night of the Living Dread,” which has also been shortlisted for a GSA BAFTA Student Award in the Animation category.

“In such a challenging year for so many around the world, it is important to recognise the hard work and dedication of film graduates, and the future is bright,” says Brian Claypool, executive vice president, Cinema, Christie. “It is clear from the comments from NFTS staff that Charlie is not only a highly talented individual, but also a dedicated student, and we look forward to seeing his work as his career develops. It’s a pleasure to support NFTS in its awards, and we would like to extend a huge congratulations to Charlie.”

The NFTS, which is celebrating its 50th anniversary in 2021, is one of the world’s leading film, games and television schools. Following the findings of the Graduate Impact Report 2020, Lord David Puttnam said the NFTS had been at the forefront of making the UK’s creative economy such an extraordinary success story, producing graduates who have played an incredible part in the evolution of a vibrant British screen sector. NFTS graduates have gone on to win 11 Oscars, 138 BAFTAs and earn more student Academy Award nominations than any other film school. In 2018 the NFTS became the first educational institution to be recognised with a BAFTA for Outstanding Contribution to British Cinema.