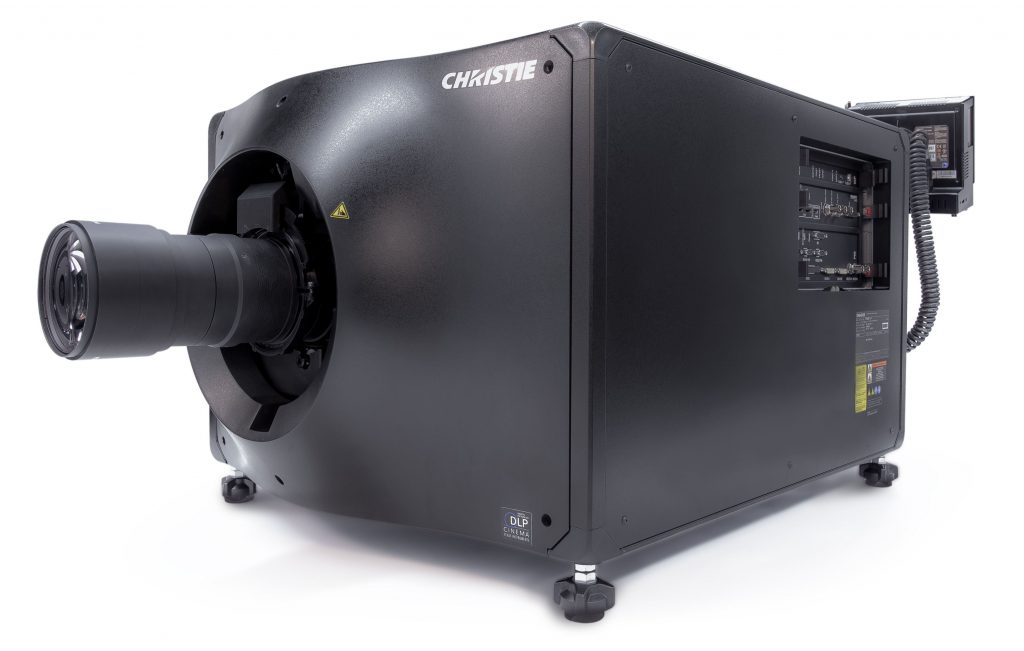 Christie, a leader in creating and delivering the world’s best visual and audio experiences, is offering the first-ever preview at the 72nd Australian International Movie Convention (AIMC) of the next generation Christie CP4325-RGB pure laser cinema projector. The convention takes place at The Star Gold Coast in Queensland, Australia, October 8-12.

The direct-coupled RGB pure laser projector has generated much interest among exhibitors around the world since its first preview at CinemaCon in March. With its innovative design and direct-coupled RGB illumination system, the Christie CP4325-RGB is the most advanced pure laser projector to come to market. Its compact ‘all-in-one’ form factor eliminates the need for sub-ambient cooling, and provides a vast palette of colours, higher contrast ratio, and low maintenance costs for exhibitors looking at embracing laser projection in their mainstream auditoriums. Two CP4325-RGB projectors are currently on display at the HOYTS Cinema Technology Group (CTG) and Edge Digital Technology booths, located at #15-16 and #21-22 respectively.

“As a strong supporter of Australian cinema and the leader of cinema technologies, we’re excited to show  delegates a preview of Christie’s upcoming CP4325-RGB pure laser cinema projector, which is poised to be a game-changer in terms of its all-in-one enclosure system and high performance capabilities,” said Michael Bosworth, General Manager, Christie Australia. “Entirely designed and built at Christie’s world-class research, development and manufacturing facility, the CP4325-RGB will deliver an all-new platform offering an affordable, reliable and performance-driven cinematic experience, developed specifically to meet the needs of mainstream cinemas. In particular, the projector’s compact footprint means that it can be easily integrated into any standard cinema booth.”

Lin Yu, Vice President, Christie Asia Pacific, added, “Christie has continued to place strong emphasis on the Australian and New Zealand cinema industry, and I’m pleased to note that the AIMC is the perfect platform to showcase our latest technologies and innovation to the fraternity. The sneak preview of our upcoming CP4325-RGB at this year’s event is a case in point. Intended for mainstream cinema applications, the CP4325-RGB is a game-changing proposition for exhibitors looking at upgrading existing installations, as well as for new-build cinemas and retrofits. I’m confident that the CP4325-RGB will become the benchmark for laser-based cinema and exemplifies Christie’s technological leadership in the cinema market.”

Similar to the fibre-coupled Christie CP42LH RGB pure laser projection system used in premium auditoriums, the CP4325-RGB boasts 4K resolution, offers a wide colour gamut exceeding DCI P3, enhanced contrast ratios and high frame rates. Since the projector does not require any external cooling, system complexity and costs are drastically reduced. This translates into an impressive and reliable operational life of more than 30,000 hours, with an 80 percent brightness delivery over this time. The CP4325-RGB also has a contrast ratio of up to 6000:1 and provides better uniformity and a wider colour gamut than other cinema projection systems.

Christie RGB pure laser installations in Australia
Since its rollout in 2014, Christie’s RGB laser projection technology has become the preferred choice of leading exhibitors around the world. In Australia, HOYTS Chadstone in Melbourne is the first cinema complex to be equipped with Christie’s RGB laser projection system with enhanced wavelength diversity, which offers a spectacular 3D viewing experience on silver screens. In addition, Sydney-based post-production house Definition Films has also chosen the Christie CP42LH RGB pure laser projection system for projection and review screenings at its facility.

Besides offering a complete range of cutting-edge cinema and lobby solutions, Christie also runs a network operations centre in Melbourne. The Christie-ICAA Network Operations Centre (NOC) serves as the central hub for cinema support activities in Australia and New Zealand, providing 24/7 monitoring of hardware such as projectors, players, IMBs, theater management systems and networks that connect all these components. As well, it offers round-the-clock telephone support for all technical issues, including day-to-day operational questions.

Besides showcasing the Christie CP4325-RGB, Christie is dazzling delegates with visually-arresting movie trailer content using the award-winning Christie MicroTiles arranged in a 4-by-7 array in the Southport Room within the trade exhibition area. Ideal for cinema lobbies, Christie MicroTiles is known as the ultimate digital canvas that provides amazing image quality, vibrant, true-to-life colours, brilliant displays and the flexibility to design in any shape or size.

Employing the strengths of both DLP projection and Light Emitting Diode (LED) technology, Christie MicroTiles offer substantially brighter images and a much wider colour palette than conventional flat panel LCD and plasma displays. With no practical limit to the number of tiles in a display, Christie MicroTiles produce a virtually seamless canvas with an unlimited number of super-fine pixels. The tiles’ modular, flexible design means they blend into any environment.

About Christie
Christie Digital Systems USA, Inc. is a global visual technologies company and is a wholly-owned subsidiary of Ushio, Inc., Japan, (JP:6925). Consistently setting the standards by being the first to market some of the world’s most advanced projectors and complete system displays, Christie is recognized as one of the most innovative visual technology companies in the world. From retail displays to Hollywood, mission critical command centers to classrooms and training simulators, Christie display solutions and projectors capture the attention of audiences around the world with dynamic and stunning images, accompanied by awe-inspiring sound. Visit www.christiedigital.com.