Christie Illuminates the Future of Technology at CinemaCon 2019 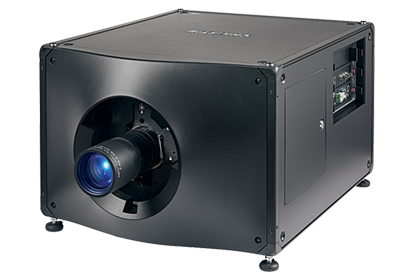 Christie, a leader in creating and delivering the world’s best visual and audio experiences, will be opening CinemaCon 2019, April 1 – 4 at Caesars Palace with an arsenal of projection and sound innovations, designed to best tell the stories that capture the hearts and minds of audiences worldwide, while adding to the bottom line of the studio and exhibition communities.

The Milano 1-3 ballrooms, complete with a 30-seat theatre with Christie RealLaser projection and Vive Audio, will showcase how energy-saving, future-proofed projection and sound offerings can deliver ultra-realistic color, contrast and bright images for life, along with unequalled cinema sound. All to be expected from Christie, the cinema industry’s most reputable leader, committed to the industry for more than half a century.

“And what a difference a year makes. Last year at CinemaCon, Christie debuted its 4K resolution CP4325-RGB cinema projector, the first RealLaser system developed for mainstream cinema exhibition. Exhibitors have recognized the advantages bestowed by our exclusive Christie RealLaser illumination platform,” said Dale Miller, executive vice president, Cinema, at Christie. “Interest in and orders for our new, RealLaser-equipped systems, including the Christie 2K resolution CP2315-RGB and CP2320-RGB models added to the family in 2018, is exceeding all expectations.”

Since their official launch, Christie’s pure laser CP4325-RGB, CP2315-RGB and CP2320-RGB projectors, based on the Christie RealLaser illumination platform, have been embraced by exhibitors around the world for new installations and as the best replacements for existing installations. All manner of cinemas, from chains to single art-houses, have jumped on the bandwagon, including China’s Wanda Cinema Line, Taiwan’s Showtime Cinemas, Australia’s HOYTS Cinemas, Thailand’s Major Cineplex, the Philippines’ SM Cinema, France’s CGR Cinemas and Mexico’s Cinemex ARTZ, to name a few.

See New Entry-Level and Premium Large Format (PLF) Christie RGB projectors in Milano
Christie will launch the CP4330-RGB projector, a higher-lumen output version of the CP4325-RGB, at the show, as well as preview two new models coming off of Christie’s world-class manufacturing lines in 2019. The new CP4330-RGB can be seen in scheduled demonstrations throughout each day. The preview of the CP2309-RGB, extending its mainstream cinema projector family, and the CP4450-RGB, boasting dual laser optical systems (LOS) and CineLife+ electronics, for Premium Large Format (PLF) theatres, will add to an already-stellar lineup of the most affordable pure RGB laser cinema projectors in the world.

In the CP2309-RGB model, exhibitors will get an all-in-one system based on the proven CP2315-RGB design and leveraging the 0.69” DMD-chipset from TI, delivering more than 8500 lumens with an impressive 2000:1 contrast ratio, at a very attractive price. Debuting at CinemaCon 2019 and available in the summer, this desirable, highly-economic entry-point to Christie’s acclaimed RGB laser projection family is ideal for the first round of replacements to Series One projectors worldwide.

As well, the Vive Audio family will be extended with the launch of a new, low-profile, coaxial ribbon driver ceiling surround sound speaker, the LS2C. And the LA3Si and LA3i replacements for the current LA3S-3ohm and LA3 speakers will be previewed.

With more than 65,000 digital projectors in the market today, Christie is invested in making sure that every presentation is perfect. Christie’s Managed Services group offers a variety of programs that combine the industry’s most comprehensive extended warranty options with concierge and unique service level capabilities that brings an unparalleled peace of mind to exhibitors large and small. The team will be on hand to answer questions about how our customized services and solutions may be able to help exhibitors make the next transition to Christie RealLaser, or simply add more life to their existing investments.

As always, CinemaCon attendees can rest easy, knowing that all the exciting new product reels and screenings that showcase the magic of cinema in the Colosseum will be delivered by either Christie’s tried-and-true CP4230 projectors installed there, or by Dolby Vision laser projectors, which are manufactured by Christie.

About Christie
Christie Digital Systems USA, Inc. is a global audio and visual technologies company and is a wholly-owned subsidiary of Ushio, Inc., Japan, (JP:6925). Consistently setting the standards by being the first to market some of the world’s most advanced audio solutions, projectors and complete systems, Christie is recognized as one of the most innovative visual technology companies in the world. From retail displays to Hollywood, mission critical command centers to classrooms and training simulators, Christie display and audio solutions and projectors capture the attention of audiences around the world with dynamic and stunning images.