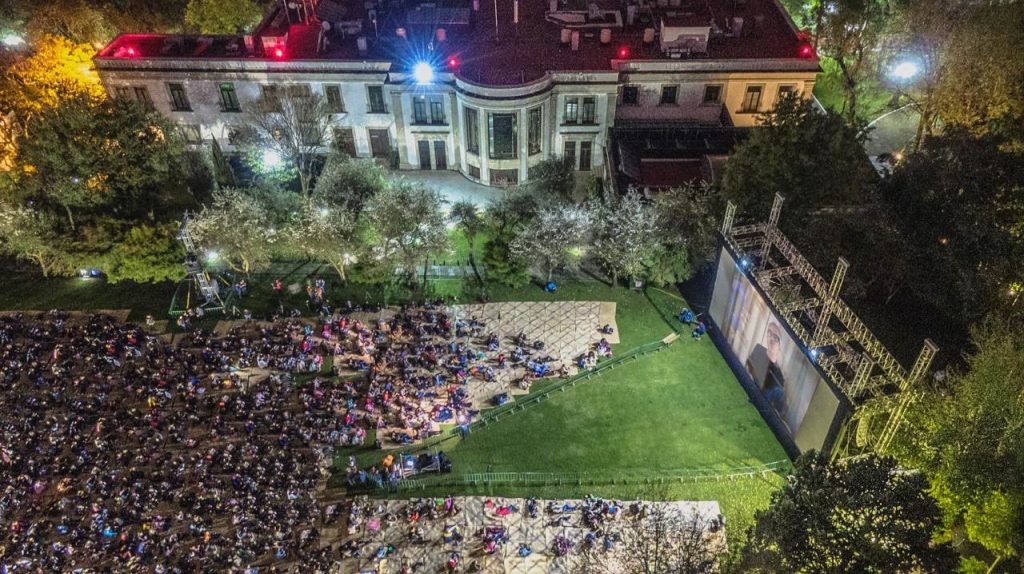 Christie, a leader in creating and sharing the world’s best visual and audio experiences, is pleased to announce that the film “Roma” directed by Alfonso Cuarón and produced by Netflix was recently screened before an audience of 3000 people in the gardens of the Los Pinos Cultural Centre in Mexico, the former official residence of the country’s president, using a Christie CP4325-RGB pure laser projector with RealLaser technology.

Winner of the Best Foreign Language Film and Best Director honors at the Golden Globes and Golden Lion Award for Best Film at the Venice Film Festival, “Roma” premiered worldwide on December 14 on the Netflix digital platform. Filmed in 6.5K format, the movie is also on a shortlist for the Academy Awards foreign language film category.

For the space of a few hours, the Presidential Heliport Garden turned into a vast open-air movie theatre where 3,000 people were able to see “Roma” free of charge on a screen measuring 15 metres wide by 7 metres high with Christie RGB laser projection and Dolby 7.1 sound. The screening was organized by Mexico’s Ministry of Culture.

Two weeks earlier, “Roma” was shown at the BlackBerry Auditorium in Mexico City, the former Las Américas film theatre, in four separate screenings to a total audience of around 6,500. The theatre was equipped for the occasion with another Christie CP4325-RGB projector, and the box-office receipts donated to the Pienza Sostenible civil association, whose mission is to reconstruct areas affected by the September 2018 earthquake in Mexico.

“We knew straight away that if we were going to give spectators a truly unforgettable movie-going experience, then the best pure laser projection option was unquestionably Christie RealLaser,” explained Carlos Cuevas, founder of Cactus Cinema Services, the company commissioned with the technical production for the four screenings.

“This projector affords excellent image quality, incredibly rich colours and spectacular contrast, and all this with a compact form factor. We are convinced that it is the future of cinema projection,” he added.

Christie’s relationship with “Roma” goes back much further. Last August, the movie had a limited premiere in two independent theatres in Mexico City: Cine Tonalá in Colonia Roma, the neighbourhood in Mexico City after which the movie was named, and Sala 4 at Cinemanía Plaza Loreto. Netflix equipped both theatres with Christie CP4220 4K lamp-based projectors, which added to the importance of the occasion. The two theatres were fitted with Dolby Atmos and Dolby IMS3000 integrated media servers. Cactus Cinema Services supervised the integration, construction and implementation of all systems.

“Christie CP4220 projectors were chosen for these theatres because of the mainstream image quality they deliver, as well as the quick response of the brand’s service team in Mexico”, recalled Carlos Cuevas, founder of Cactus. “The new projectors updated the theatres’ existing equipment, providing a 4K image with high quality brightness and colour contrast. Christie was on board throughout the whole roll-out of the project, right from the initial conception. Its team was on hand here in Mexico City at all times, working alongside us in the installation and setting up to ensure the optimum quality of the projection,” Cuevas added.

Ernesto Armus, manager of Christie’s Cinema Division and Senior General Manager in Mexico, concluded: “We are especially delighted that our projection technology is playing a key role in the screening in Mexico of such an important movie as “Roma.” And we particularly want to thank our partner Carlos Cuevas of Cactus Cinema Services, who has a well-earned excellent reputation in the cinema industry, for his enthusiasm and professionalism throughout the whole project.”