Christie Adds a Touch of MAGIC to Rochester Institute of Technology 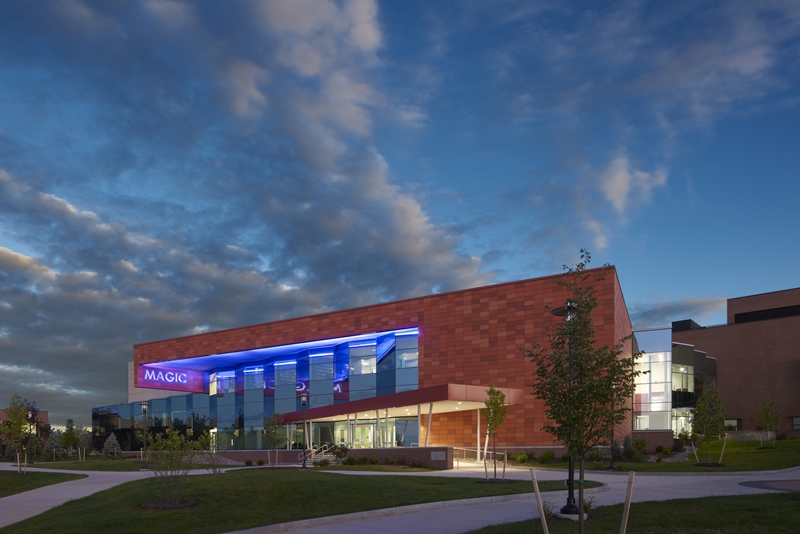 Rochester, NY (October 31, 2019) – Rochester Institute of Technology (RIT), a leading university in Western New York, has upgraded its facilities to include a world-class creative technology and design hub at MAGIC Spell Studios. The 52,000-square-foot space brings together RIT’s academic strengths in game design and development, film and animation, new media design and more. Aiming to arm its students with the finest technologies, MAGIC Spell Studios is a high-end center of excellence that rivals any Hollywood studio facility. The new building — the only one of its kind in the Northeast — boasts the latest in technology and design equipment, and uses a host of Christie technology, including projectors, flat panel displays and audio. Audio-Video Corporation, one of New York State’s most successful audiovisual firms with a history dating back to 1946, carried out the eye-catching installation.

“Prior to MAGIC Spell Studios, we lacked access to a proper digital cinema infrastructure,” says David Long, Director, RIT MAGIC Center. “The academic programs needed proper research environments for working on advanced cinema applications. Further, RIT is heavily investing in convergent technologies across all digital media in general – from film and digital graphics to game design and development. We’ve opened up a facility that’s on the leading edge of both audio and visual quality. Our students are designing stuff that is pushing the boundaries, and it’s exciting to have that gear here in our production and exhibition spaces.”

“We have a digital media suite for color correction and for training colorists who want to work in the cinema industry,” says Long. “What we’ve built here is equivalent to what you’d find in Hollywood, Toronto, or New York City. This is a completely professional production center.

“All of the spaces – inclusive of the Christie technology – are living laboratories, not just for creatives who want content to look good, but for technologists and engineers who want to design the next wave of that technology,” continues Long. “This is great for those that want to be able to operate within a professional ecosystem at a university where you might not typically expect that.”

Christie technology throughout RIT facility
RIT has also outfitted five classrooms with Christie HS Series 4K projectors, so that every visual presentation throughout the building is in 4K resolution. These rooms are for everyday teaching, from film and game design classes to new media design and graphic design. Additionally, RIT showcases creative content generated by students throughout the building using the Christie Access Series flat panels in a range of sizes located in the lobby, huddle spaces, and other prominent locations. These business-grade 4K UHD panels are perfect for meeting rooms and digital signage.

“What impresses me is the seamless integration of the 4K equipment in our everyday operation,” Long concludes. “What I see with this is as good as anything out of Hollywood.”

About Rochester Institute of Technology
Founded in 1829, Rochester Institute of Technology is a diverse and collaborative community of engaged, socially conscious, and intellectually curious minds. Through creativity and innovation, and an intentional blending of technology, the arts and design, we provide exceptional individuals with a wide range of academic opportunities, including a leading research program and an internationally recognized education for deaf and hard-of-hearing students. Beyond our main campus in Rochester, New York, RIT has international campuses in China, Croatia, Dubai, and Kosovo. And with more than 19,000 students and more than 135,000 graduates from all 50 states and over 100 nations, RIT is driving progress in industries and communities around the world. Find out more at rit.edu.

About Christie
Christie Digital Systems USA, Inc. is a global visual and audio technologies company and a wholly owned subsidiary of Ushio Inc., Japan (JP: 6925). Christie revolutionized the movie industry with the launch of digital cinema projection, and since 1929 has embraced innovation and broken many technology barriers. From the world’s largest mega-events to the smallest applications, our technology —from advanced RGB pure laser and SDVoE technology to image processing and LED display solutions— empowers people to create the world’s best shared experiences. Visit www.christiedigital.com.