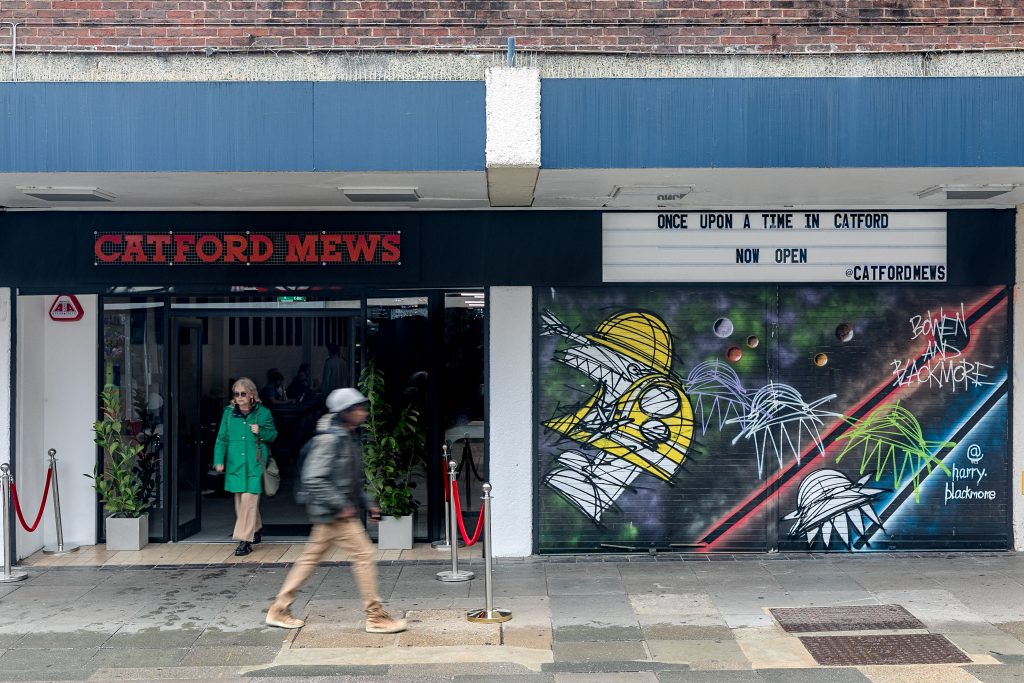 Developer Really Local Group, who create and restore cultural infrastructure by ‘putting the heart back into the high street’, has officially opened the doors to its first of a kind venue, Catford Mews. Acting as a creative community hub for South London, the 14,000 sq ft venue will provide a multi-screen cinema, live entertainment space for music and comedy, pop-up food market with local traders, and eventually co-working areas and exhibition space.

Catford Mews is Really Local Group’s first London location that is set to inject much-needed buzz and empowerment back into the local area. Providing an inclusive and affordable venue for the community that is uniquely designed to embrace the diversity, history and vibrant culture of the location with amenities relevant to the local demographic and community led programming at the heart.

Spearheading a revival of the Catford Centre, the space will be a destination in its own right, welcoming all ages and local groups. The cinema is the first multiscreen in Lewisham in almost 20 years and all programming is done in house in partnership with the Independent Cinema Office (ICO), with extensive consultation from the local community to select specific films. The cinema offers 220 seats across 3 screens and is fully accessible, with wheelchair access and hard-of-hearing screenings.

The cinema aims to be affordable and inclusive, with ticket prices between £4.99 -£9.99, and discounts for students, families, over 60s plus further discounts for members available. From 27 September the cinema will introduce a weekly Family Favourites screening on Sunday mornings at 11am for the whole family, with tickets priced at £2 per person. There will also be babies and carers screenings twice a week, plus Monday Matinee screenings for retirees. For the opening week Catford Mews will show a range of films including, It Chapter 2, Tarantino’s Once Upon A Time In Hollywood, Pedro Almodovar’s Pain & Glory, Joanna Hogg’s The Souvenir, Sprinter by Storm Saulter and Peter Webber’s Inna De Yard. The venue will also be hosting Catford Film Festival’s free screening of Tucked on 16 September at 8pm and The Fox and Other Tales on Saturday 21 September at 10am.

Music and art will also form a key aspect of Catford Mews’ identity with a stage and live performance equipment available encouraging local collectives, artists, groups and even schools to become part of the diverse Catford Mews programme. Upcoming highlights include the venue’s first Halloween, where Catford Mews will collaborate with South London based We Do Good Disco to host a Double Bill and themed Disco evening on the 26 October. The space will also invite everyone from professional artists to local school children to use the venue as a showcase for exhibitions. The first will be the Habibi collective, who are presenting a screening of short films by London based Arab British female film makers, followed by a panel and photography exhibition in the bar.

The food market will include a variety of stalls from local traders, ranging from Vegan Scandi Inspired Deli by Daun’s Deli, a fresh new take on Jamaican patties by Patty Man, popular Japanese dishes of Kara-agé Chicken and Kara-agé Tofu by FUSÉ and vegan doughnuts by Bears Dough. The venue will also include a full-service bar, serving local produce, with its very own Catford Mews beer from local Brockley Brewery to be available in the coming months.

Locals can buy Founder Memberships for Catford Mews, with several membership options available, including student, 60+, family, and standard which are available from £25. Benefits of membership include free cinema tickets and exclusive discounts across the venue.

Preston Benson, Founder and visionary behind Really Local Group, commented: “Really Local Group is all about prioritising true localism, delivering first-class and much needed cultural infrastructure with genuine consultation with the people of the local area. It is my aim to make Catford Mews the envy of South London, a destination for the people of Catford and the surrounding area. I am incredibly excited to open this new community space and look forward to sharing details on our next projects in the coming months”

About Really Local Group
Founded in 2017, Really Local Group creates and restores cultural infrastructure by ‘putting the heart back into the high street’, which will act as a catalyst for the wider regeneration of the local area. The company will provide inclusive and affordable venues for communities, which will be uniquely designed to reflect their locality, and will act as a community ‘hub’ for the area.

The venues will always have a number of cinema screens at their heart, along with a live entertainment space, flexible workspaces, a food market featuring local traders, a full service bar stocking local produce, where available, and a community based events programme.

The venues will be designed to meet the varying needs of the locals throughout the day and night, for example starting with a focus on ‘kids and carers’ in the mornings, to retirees in the afternoons, and just about everyone in the evenings.

Their first venue, Catford Mews, will open late Summer this year, and will be followed by several additional sites already in the pipeline which will be delivered over the next three years. All projects will be in areas that have suffered from a lack of cultural infrastructure.

The schemes will be truly bespoke and reflective of their locality, often created by repurposing existing buildings and working with local craftsmen and designers to ensure maximum efficiency and sustainability. The schemes will be delivered as quickly and cost effectively as possible, without compromising on quality. By thinking ‘outside the box’ and approaching development differently, Really Local Group will be able to open new sites within months of starting on site.

About Preston Benson
Preston is the Founder and visionary behind Really Local Group.

Originally from North Dakota, USA, Preston is a qualified accountant, formerly of Deloitte, and has experience in advising on and negotiating property acquisition deals. In 2005 he moved to London with the accountancy firm, dealing with property and hospitality clients, and in the last 10 years he has also worked in the serviced apartment industry and managed the real estate asset portfolio of a family office, which included a number of shopping centres.

During this time Preston became acutely aware that the majority of developers who claimed they were ‘regenerators’, were actually developing sites with a ‘top down’ approach, with little real consultation with the locals as to what they really wanted for the area, and with very little ‘social conscience’. This was leading to identikit high streets and a clear neglect of localism.

New to the London property market, Preston wanted to break this mould, to deliver true regeneration and to shake up cultural development by launching venues that would truly have the local community’s best interests at its core.