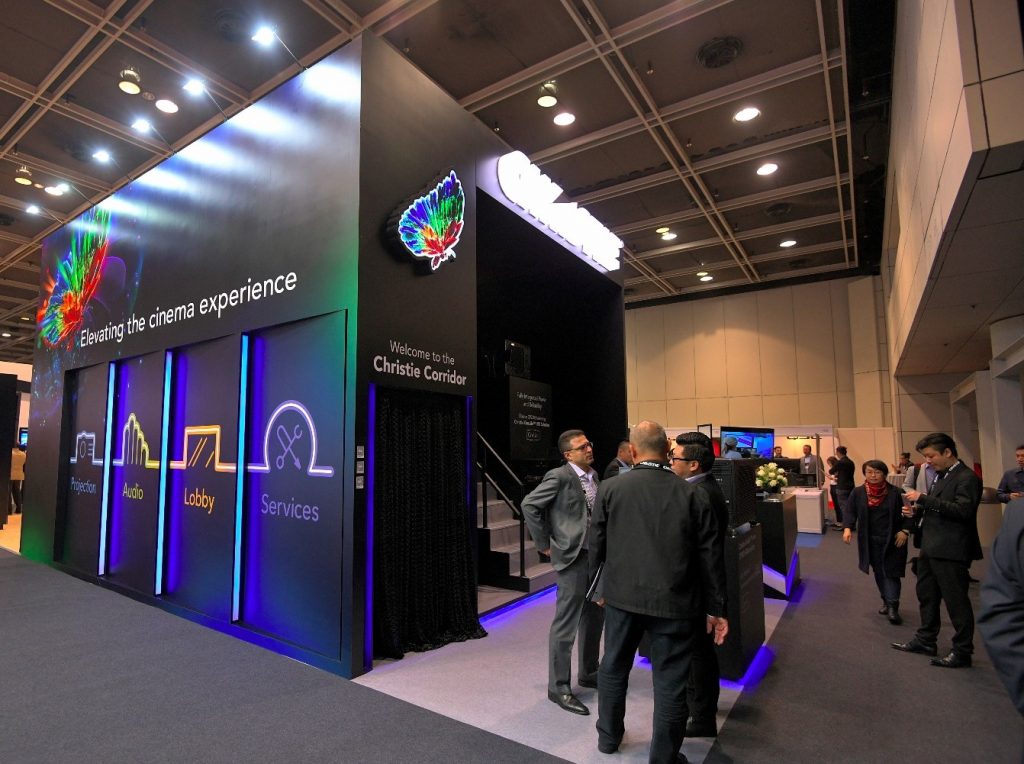 Christie, a leader in creating and delivering the world’s best visual and audio experiences, is delivering leading-edge cinema solutions for the best movie-viewing experience at CineAsia 2017, taking place at the Hong Kong Convention and Exhibition Centre, December 12-14.

The prestigious event, which brings together professionals from across the film industry, including cinema owners, suppliers, film buyers and distributors, is the only Pan-Asian convention dedicated to the cinema exhibition and distribution communities in the region. At booth #B201, Christie is presenting a broad lineup of its latest offerings, including the introduction of its new direct-coupled RGB pure laser projector using our latest CineLife image processing technology, as well as innovative audio and lobby solutions that offer the best and the most complete cinematic experience to movie-goers.

“As the innovator and leader of cinema technologies chosen by award-winning filmmakers and leading cinema chains around the world, we are proud to showcase our latest solutions to all guests at this year’s CineAsia, such as our next-generation RGB pure laser projector for mainstream auditoriums,” said Lin Yu, Vice President, Christie Asia Pacific. “Christie has continued to make significant progress in areas such as RGB laser, and we strongly believe that it is the future of cinema projection. We are confident that this next generation of laser illumination technology will set the benchmark for cinematic excellence for years to come.”

Boasting a much higher efficiency than RGB lasers used in current cinemas, the CP4325-RGB does not require sub-ambient cooling (i.e., no ‘chillers’ required) and has a compact form factor, all-in-one design. Providing superior color, higher contrast, a future-proof design and low maintenance, it offers the most authentic and immersive cinema experience for the mainstream market and is an ideal replacement product for exhibitors wishing to upgrade existing installations, as well as for new-build cinemas and retrofits.

Visitors can partake in live demonstrations of the CP4325-RGB in a custom-built internal theater at the booth, and experience how Christie’s fully integrated RealLaser illumination technology can accurately and efficiently produce light for mainstream cinema applications, which outperforms any cinema projector in its class with far superior image quality, over 20,000 lumens and more than three times the contrast ratio of existing systems.

Christie CineLife electronics platform showcase
Christie’s new CineLife Series 3 cinema electronics will be showcased at the booth with a static display of a Christie CP2308 digital cinema projector – the first cinema solution equipped with this new platform. Featuring a streamlined UX-designed interface that simplifies the playback, scheduling and management of cinema content, Christie CineLife is manufactured, designed and integrated into Christie’s range of DCI-compliant projectors.

Dazzling lineup of Christie Vive Audio and cinema corridor solutions
Another highlight at the booth is Christie Vive Audio, the world’s first audio system featuring Christie’s advanced wall and ceiling surround speakers, which are powered by unique, ribbon-driver technology in a parabolic line array design, purposely built for the cinema environment. Products showcased include the LS1 line source loudspeakers, LS2S surround speakers and S218 subwoofer, which are set up for audio demonstrations that complement the stunning visuals projected by the new CP4325-RGB pure laser projector.

The Christie Vive Audio system provides a hyper-accurate audio experience and unlocks the full dynamic range of the DCI digital cinema audio and supports leading formats such as Dolby Atmos, 7.1 and 5.1 surround sound. Featuring planar ribbon driver technology with its low distortion and superior transient response characteristics, the LS Series screen channels at the booth are single-enclosure designs ideal for most 5.1 and 7.1 distributed sound applications. Christie Vive Audio system continues to establish its reputation worldwide as the next standard in immersive sound for cinema.

Christie SP Xenolite lamps are brighter and last 30% longer than existing Xenon lamps, whilst offering the same extraordinary 99.999% in-cinema uptime. This means that users can obtain more stable brightness, reliability and usable hours with their investment, as well as longer warranties and fewer lamp replacements that lead to a lower cost of operation and less maintenance.

About Christie
Christie Digital Systems USA, Inc. is a global visual technologies company and is a wholly-owned subsidiary of Ushio, Inc., Japan, (JP:6925). Consistently setting the standards by being the first to market some of the world’s most advanced projectors and complete system displays, Christie is recognised as one of the most innovative visual technology companies in the world. From retail displays to Hollywood, mission critical command centers to classrooms and training simulators, Christie display solutions and projectors capture the attention of audiences around the world with dynamic and stunning images, accompanied by awe-inspiring sound. Visit www.christiedigital.com.