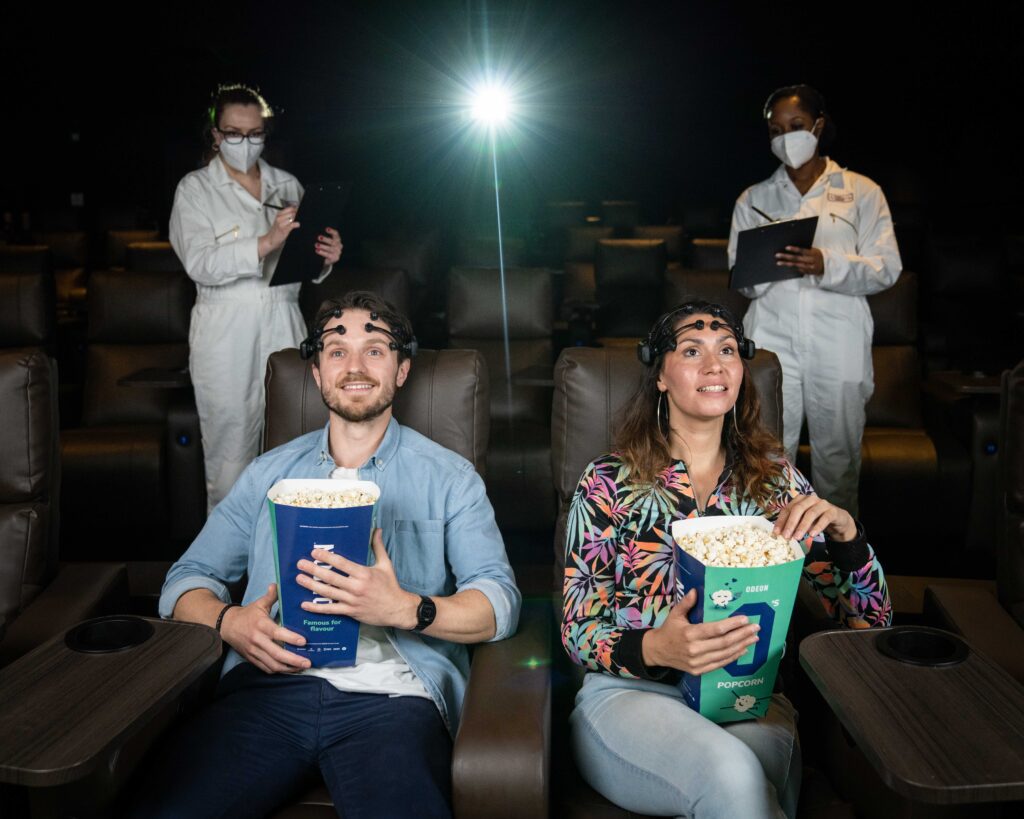 A new experiment has found watching films on the big screen IS more enjoyable than viewing at home.

In a recent experiment scientists discovered that when it comes to enjoying your favourite movies, there is no substitute for the big screen.

A team of independent scientists conducted the experiment, examining the behaviour of 12 participants using neurotechnology headsets, which monitor bio-signals via sensors around the head.

Brain and muscle data was collated while the volunteers watched hit action movie ‘The Fast and Furious’ in the cinema and in a home like environment, and found viewers smiled twice as much when watching on the big screen.

The experiment found excitement levels rose more than a quarter when watching in the cinema, compared to viewing from the sofa.

Pleasure levels also increased by a fifth from their neutral state as viewers were engaged in the action of a film for longer on the big screen.

To gather the data scientists first measured participants’ excitement and pleasure levels whilst in a neutral state. These same neurological measurements were then monitored whilst participants watched the film both on the sofa and in a cinema.

The experiment follows research of 2,000 adults commissioned by ODEON that has found 74% admit to suffering from ‘filmnesia’ when watching at home – where they can’t remember key plot details, characters – or if they’ve even watched a certain film.

Professor Brendan Walker, the lead scientist on the experiment commissioned by ODEON, said: “The results of our experiment clearly show the average person will experience a far deeper emotional response when watching a film in the cinema, compared to watching at home. Results show the immersive, no distractions environment of the cinema is the perfect place to enjoy your favourite films.

When our brains have a strong emotional response to a film, we’re more likely to remember it. Over lockdown, when we were stuck watching films on the sofa at home, the phenomenon of ‘filmnesia’ became commonplace- with many struggling to remember what they’ve watched and what they haven’t!”

It also emerged more than a third of Brits surveyed admit to being easily distracted when watching a film at home – with 52% ‘dual screening’ between the telly and their phone.

Not remembering a character’s name, not being able to recall the ending of the previous film and forgetting if they’ve ever seen the film before are the most common symptoms of filmnesia experienced.

It also takes as little as 37 minutes for Brits to lose focus on the film they’re watching at home – with 56% finding it more difficult to concentrate in their familiar surroundings. Nearly nine in 10 have suffered from filmnesia in the last year with mobile phones, toilet breaks and others talking being the biggest distractions.

Four in 10 even admit to having had to google the end of a film due to distractions at home according to the research via OnePoll.

56% think that certain genres of film, including action, sci-fi and thrillers, should only be watched on the big screen. Meanwhile action stunts, car races and scenes with a great musical score are the moments the nation believes are best absorbed at the cinema.

However, it’s not just about the action on screen, as 83% believe a trip to the cinema is about the whole experience, not just the film. On top of great cinema viewing ODEON offers a selection of mouth-watering cinema snacks, from nachos and hot dogs to popcorn with chocolate-covered treats on top.

Chris Bates, Commercial Director at ODEON UK & Ireland, who is offering deals on its myLIMITLESS pass until the end of September added: “There’s seeing films and there’s experiencing films, and the results of this experiment clearly prove that if you want to really experience a film there is no substitute for watching it on the big screen at the cinema.

We’re very excited for ‘A Quiet Place Part II’ to arrive at our screens on Friday, and would urge guests to get off their sofas and head to their local ODEON to enjoy the movie in all its big screen distraction-free glory.

At ODEON we are committed to making movies better for our guests, with premium sight and sound, comfy seats and tasty food & drinks, delivered by our fantastic hosts…”

With its Dolby Cinemas, IMAX and iSense premium screens, ODEON offers the best big screen experience, with powerful image and sound technologies. ODEON guests can now watch as many films as they like with myLIMITLESS from just £9.99 a month until the end of September. myLIMITLESS now has a three month minimum term commitment customers pay monthly, and lower prices are offer for those that book online in advanced.

‘A Quiet Place II’ and ‘Fast and Furious 9’ are just some of the blockbusters coming to ODEON screens over the next few months, alongside other highly anticipated releases such as ‘Black Widow’ and ‘Top Gun: Maverick’.

Top 10 Biggest Distractions For At-Home Viewing
1. Mobile phone
2. Having to pause it so someone can use the loo
3. Friends or family talking
4. Home phone ringing
5. Your partner
6. The doorbell going
7. Having to get up to get snacks
8. A pet
9. Social media
10. A child

About ODEON
With more than 120 cinemas, over 950 screens and 87 years of cinema experience, ODEON is the leading cinema exhibitor across the UK & Ireland.

ODEON is part of ODEON Cinemas Group, Europe's largest cinema operator, which hosts over 115m guests each year in more than 360 cinemas across 13 European countries. In 2016, our Group was acquired by AMC Theatres, creating the largest movie exhibition company in the world with over 1,000 theatres and 11,000 screens globally.