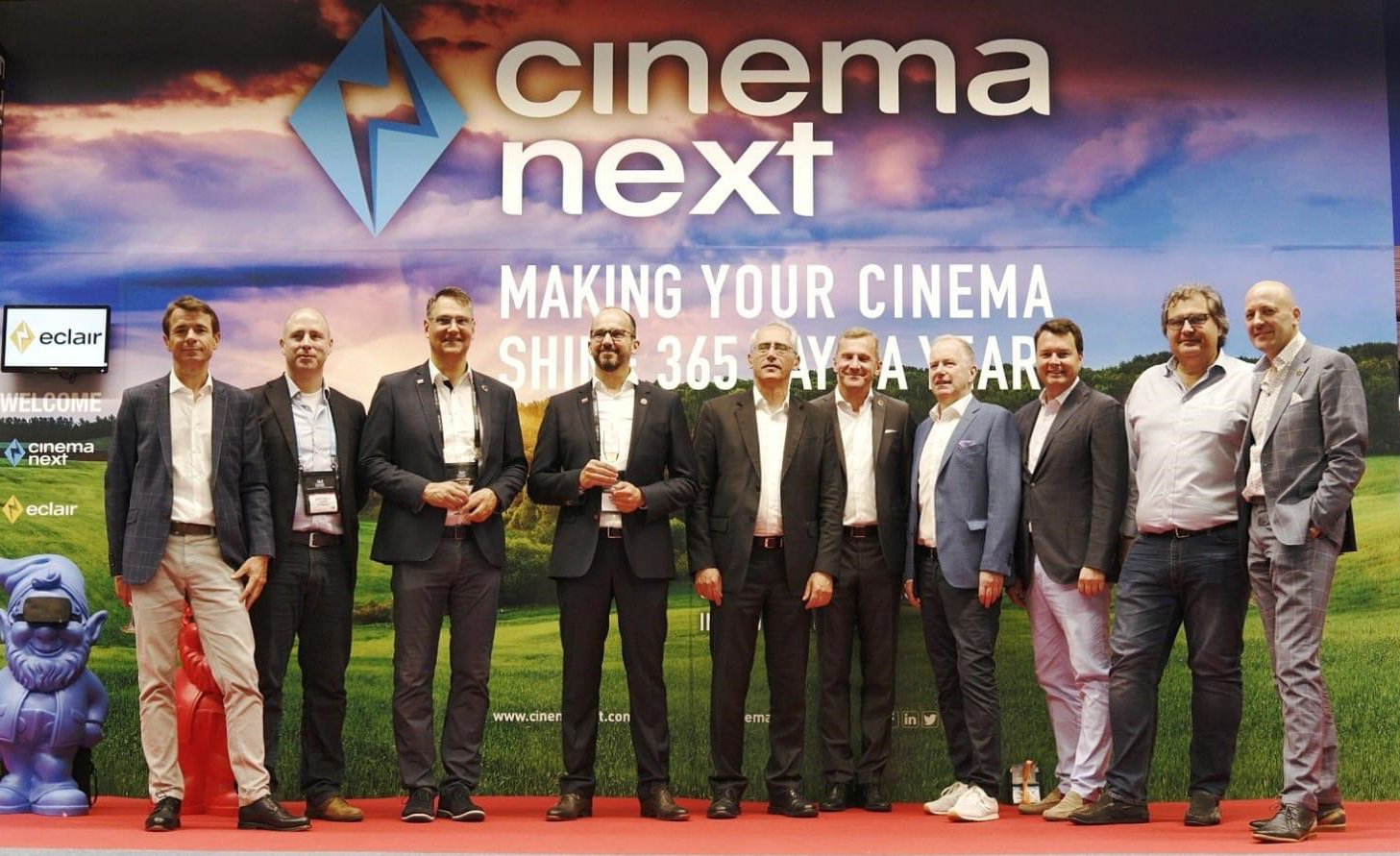 Liège (Belgium) & Vienna (Austria) (June 18, 2019) – CinemaNext, the European specialist in cinema exhibitor services (Ymagis) and Austrian cinema circuit Cineplexx (Cineplexx Kinobetriebe GmbH) today announced the signing of an agreement for the sale and installation of a minimum of 150 laser projectors over the next two years. The announcement is made in conjunction with this week’s CineEurope, the annual convention of the International Union of Cinemas, representing exhibitors and their national associations in 37 markets.

The alliance between CinemaNext Austria GmbH and Cineplexx, Austria’s leading cinema circuit, consists of the replacement of the first generation of “Series 1″ digital projectors installed in existing cinemas (131 screens) between 2008 and 2009 as well as the circuit’s new builds, for a total of more than 150 screens at Cineplexx locations in Austria and Southeastern Europe. The installations by CinemaNext’s technicians will take place between July 2019 and the end of the year 2021.

“We’ve enjoyed a lengthy partnership with CinemaNext & their operations teams in Vienna and we are very excited to be undertaking this important renewal project for our company,” explains Christian Langhammer, Owner and Managing Director of Austria’s Cineplexx Kinobetriebe GmbH (Constantin Film Group). “Supplied by Cinionic, the latest-generation Barco laser phosphor and RGB projectors significantly improve image resolution and operational performance. At a time when moviegoers are increasingly discerning, it is and always has been part of our strategy to further elevate the image quality in our cinemas to provide our audiences with the best moviegoing experience.”

For Matthew Jones, General Manager of CinemaNext in Europe, “It’s an important milestone for our company with such an innovative and key player in the European film industry as Cineplexx which underlines the competitiveness and quality of services provided by our sales teams, engineers and field technicians. It also marks the start of a new phase of equipment renewal with the replacement of the first generation of digital projectors installed in Europe between 2007 and 2013. The deal with Cineplexx, which consists primarily of equipment distribution, installation and maintenance, represents anticipated revenues of over EUR 9 million for CinemaNext over the next two years.”

“We are thrilled to be working with our long-time cinema partner and new technologies pioneer Cineplexx on the deployment of next-generation digital projection technology,” explains Christof Federle, Managing Director of CinemaNext Austria GmbH. “It’s a unique opportunity to introduce next-generation and ground-breaking image technology to moviegoers and offer them exceptional image quality in a comfortable environment while moving toward lower operating

ABOUT CINEMANEXT
CinemaNext is the Ymagis Group’s business unit dedicated to exhibitor services. Founded in 2007 and managed by professionals from the motion picture and high-tech industries, Ymagis Group is a European leader in advanced digital technology services for the cinema industry. The company’s core business is structured around three main units: CinemaNext (exhibitor services: sales and field services, software solutions, customer service/NOC and consulting), Eclair (content services: post-production, theatrical delivery, digital distribution, versioning and accessibility, restoration and preservation) and VPF (finance solutions) and other activities, including EclairColor and Virtual Reality (Illucity). A publicly-traded company listed on Euronext, Ymagis Group is headquartered in Paris (France) and counts close to 833 employees. For more information, please connect to https://www.ymagis.com, https://www.cinemanext.com or https://www.eclair.digital

ABOUT CINEPLEXX INTERNATIONAL GMBH
In 2009, the Cineplexx International GmbH started expanding to Austria’s neighbouring countries and the first cinema outside Austria was opened in Bolzano, South Tyrol. Cineplexx also took over a cinema in Zagreb’s city centre, thus laying the foundation for expansion into Croatia. Further Cineplexx cinemas followed in 2011 and 2012 in Croatia, Serbia, Montenegro and North Macedonia. In 2013 Cineplexx established five multiplex movie theatres in Slovenia and the first seven-hall cinema in Albania. Further expansions into Kosovo and Greece took place in the following years. The last expansion occured in June 2019 when Cineplexx has debuted on the Romanian market by establishing three cinemas until end of the year. The foundation was layed by acquiring the 2700 seats Cinema at Baneasa Shopping City.Today, Cineplexx has a strong presence with 49 Multiplex Cinemas and 6 traditional cinemas in Austria, Slovenia, Croatia, Bosnia and Hercegovina, Serbia, Montenegro, Kosovo, Albania, North Macedonia, Greece, Italy and recently also Romania. With around 1,500 employees, the company generated sales of around 130 million Euro in 2018. In 2018 the Cineplexx cinemas welcomed almost 12 million visitors. Constantin Film Holding GmbH, to which Cineplexx International GmbH belongs, was founded in 1951 as a film distributor in Austria. The group stands for modern, visionary cinema and is the undisputed pioneer in cinema technology – this was confirmed in 2018 with the latest innovations in Cineplexx Wienerberg (Onyx-LED and Real D Flagship-Laser), Cineplexx Graz, Belgrade and Novi Sad (MX4D) as well as the IMAX laser in Cineplexx Donau Plex. More information at www.cineplexx.at