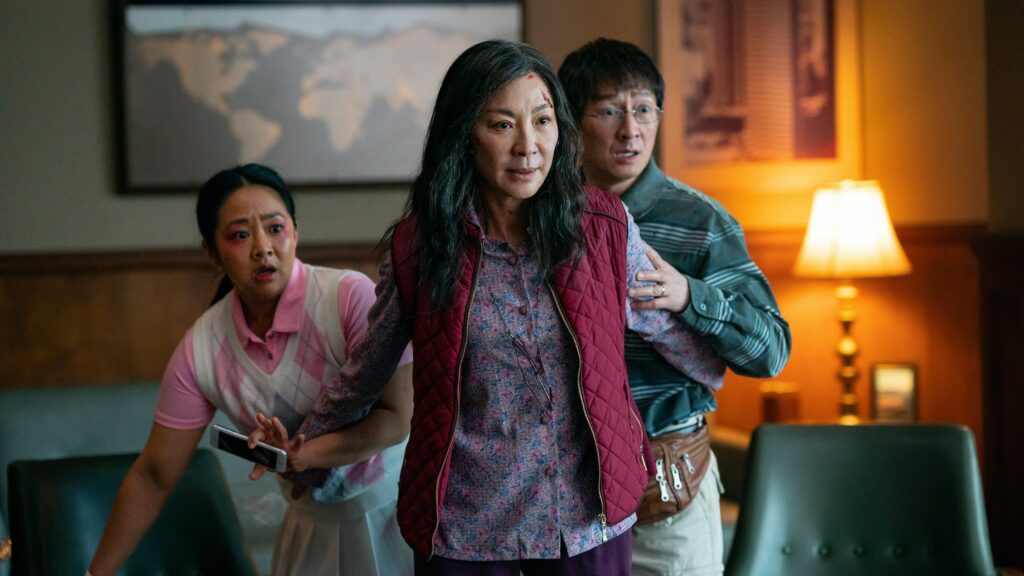 Daniels’ latest directorial effort joins a select group of films determined by the renowned cinema-eatery to be innovative and essential.

From Robert Eggers’ breakthrough “The Witch” to the searing documentary “I Am Not Your Negro” and the industry-redefining Best Picture winner “Parasite,” Alamo Drafthouse Cinema’s Drafthouse Recommends program has helped audiences around the country discover over forty innovative, ambitious and essential films. The Austin-based cinema’s latest selection – and their first in over a year – is A24’s “Everything Everywhere All at Once,” the mind-meltingly brilliant new epic written and directed by Daniel Kwan & Daniel Scheinert – aka Daniels, the duo behind 2016’s “Swiss Army Man.”

Alamo Drafthouse audiences will be the first audiences across the country to see the film following its March 11th SXSW premiere via a series of exclusive advance screenings on Thursday, March 17th. The film opens March 25th at Alamo Drafthouse Brooklyn and Alamo Drafthouse San Francisco, and expands to additional locations in April.

“I walked out of this screening and told anyone who would listen – ’ask me on December 31st, and I am quite confident that my opinion will not waver: “Everything Everywhere All at Once” is my favorite movie of 2022’,” says Alamo Drafthouse founder Tim League. “Breathtakingly beautiful, absurd, touching, guffaw-inducingly hilarious, layered, cerebral, and at the same time delightfully and brilliantly immature – it’s like if Tim & Eric directed “The Matrix”. Good lord, I love this film.”

Deftly balancing the all-too-real generational struggles of immigrant families with an epic, dimension-spanning plot drawn straight out of the wildest comic book crossovers, “Everything Everywhere All at Once” manages to make a film where the finances of a family-owned laundromat, over-the-top martial arts choreography, and oversized hotdog fingers work.

Anchored around an awards-caliber lead performance by cinema icon Michelle Yeoh, “Everything Everywhere All at Once” boasts an incredible cast performing double, triple, and infinite duty in dimension-spanning roles. They include ‘80s icon Ke Huy Quan (“Indiana Jones and the Temple of Doom”, “The Goonies”), Stephanie Hsu (“Shang-Chi and the Legend of the Ten Rings”), Jamie Leigh Curtis, and legendary Chinese-American actor James Hong (“Big Trouble in Little China”)

To give audiences a taste of what’s in-store, Alamo Drafthouse is presenting free screenings of Daniels’ debut film, “Swiss Army Man” across the country beginning on March 21, a previous Drafthouse Recommends selection. Guests can reserve their seats today by purchasing a food and beverage voucher that can be redeemed towards items off our full-service, in-theater menu. And, in celebration of star Michelle Yeoh, select theaters nationwide will be screening a new digital presentation of the Hong Kong fantasy superhero extravaganza “The Heroic Trio”, also beginning on March 21, courtesy of Janus Films.

About “Everything Everywhere All at Once”
Directed by Daniel Kwan and Daniel Scheinert, collectively known as Daniels, the film is a hilarious and big-hearted sci-fi action adventure about an exhausted Chinese American woman (Michelle Yeoh) who can’t seem to finish her taxes.

About Daniels
Daniel Kwan & Daniel Scheinert made a name for themselves directing highly original and visually arresting music videos for musicians such as Manchester Orchestra, Foster the People, Joywave, Tenacious D, and the iconic video for DJ Snake & Lil’ John’s “Turn Down for What”. Their debut film, SWISS ARMY MAN, was nominated for multiple awards, and won the Directing Award for US Dramatic films at the 2016 Sundance Film Festival.

About Alamo Drafthouse
Alamo Drafthouse Cinema was founded in 1997 as a single-screen mom and pop repertory theater in Austin, TX. Twenty-four years later, with 36 locations and counting, Alamo Drafthouse has been called “the best theater in America” by Entertainment Weekly and “the best theater in the world” by Wired. Alamo Drafthouse has built a reputation as a movie lover’s oasis not only by combining food and drink service with the movie-going experience, but also introducing unique programming and high profile, star-studded special events. Alamo Drafthouse created Fantastic Fest, a world-renowned film festival dubbed “The Geek Telluride” by Variety. Fantastic Fest showcases eight days of genre cinema from independents, international filmmakers, and major Hollywood studios. Alamo Drafthouse’s collectible art gallery, Mondo, offers breathtaking, original products featuring designs from world-famous artists based on licenses for popular TV and movie properties including Star Wars, Star Trek & Universal Monsters. Alamo Drafthouse continues to expand its brand in new and exciting ways, including the American Genre Film Archive, a non-profit film archive dedicated to preserving, restoring and sharing film, and Alamo On Demand, a new VOD platform boasting a growing and carefully curated library of entertainment for rental or purchase.