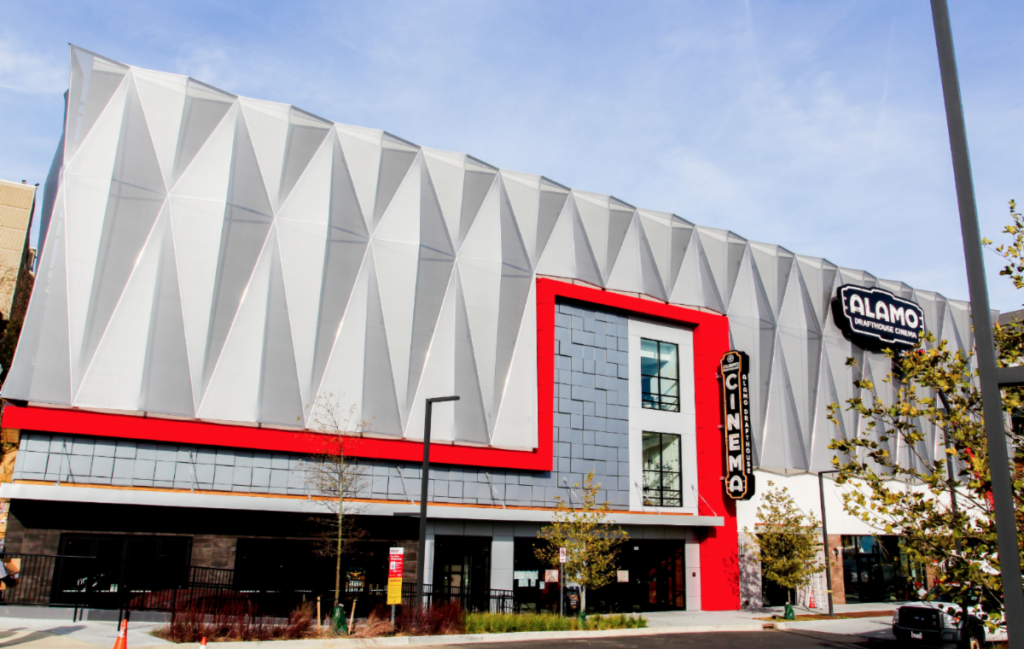 Tickets are on sale now at drafthouse.com, and guests will soon enjoy Alamo Drafthouse’s curated, ad-free pre-show entertainment, signature mix of first-run films and curated specialty programming, an extensive made-from-scratch food and beverage menu, and luxury recliner seating throughout every auditorium. Alamo Drafthouse D.C. Bryant Street is located adjacent to the Rhode Island Ave-Brentwood metro station, and free validated garage parking is available. During the “soft opening” period running through December 15th, guests will receive 25% discounts on select food and non-alcoholic beverages while staff trains and gets up to speed.

“After more than five years of looking for the right location and another five years of development, we are happy to finally share the Alamo Drafthouse experience with the residents of Washington, D.C.,” said Anthony Coco and Joseph Edwards, co-owners of Alamo Drafthouse Cinema, Washington D.C. “The theater’s lobby, The Highbinder bar, and The Big Show spaces have really come together to create something special and unique to D.C. Combined with Alamo Drafthouse’s top-of-the-line audio/visual presentation, unique programming, and unparalleled food and beverage service, the D.C. theater will provide an unrivaled out-of-home experience that we can’t wait to deliver to our guests.”

D.C. Theme
Given it’s the first Alamo Drafthouse location in the nation’s capital, the D.C. team had fun playing with a decidedly appropriate “Washington, D.C. on the big screen” theme throughout the theater that guests will appreciate from the moment they step inside the building. A “Hall of Presidents” in the lobby celebrates eleven of the silver screen’s favorite movie Presidents, including Kevin Kline’s President Kovic (“Dave”), Morgan Freeman’s President Trumbull (“Deep Impact”), Harrison Ford’s President Marshall (“Air Force One”), with a few fun surprises among the bunch, but the centerpiece of the lobby is the lifesize statue of Bill Pullman’s President Thomas J. Whitmore from the 1996 sci-fi favorite “Independence Day” with a quote from the famously-inspiring speech from the film engraved and mounted on the wall. The theme continues on from the lobby to The Big Show, where a giant “Aliens attack D.C.” entrance that is a spectacle to see welcomes guests to the largest screen in D.C. The theater’s stand-alone bar, The Highbinder, also takes on the look and feel of a political spy thriller, complete with a special drink menu of spy-themed cocktails.

Programming
Alamo Drafthouse D.C. Bryant Street opens amidst an incredible resurgence in the cinema industry that’s seen “Shang-Chi: the Legend of the Ten Rings”, “Venom: Let There Be Carnage”, and “Ghostbusters: Afterlife” open to massive box office success, and just in time for a string of major Hollywood releases this holiday season like Stephen Spielberg’s remake of “West Side Story”, “Spider-Man: No Way Home”, “The Matrix Resurrections”, and “Sing 2”. Moviegoers can look forward to being introduced to Alamo Drafthouse’s famous Signature Programming in January: Movie Party screenings celebrate film favorites with fun, interactive props, themed drinks, and more, Brunch Screenings feature a special menu that pairs perfectly with everyone’s favorite late morning weekend ritual, and Terror Tuesday and Weird Wednesday bring an eclectic mix of horror and strange discoveries from the genre fringes.

Additionally, Alamo Drafthouse protects the theatrical experience with a zero tolerance policy for people who disrupt the film with talking or texting. Alamo Drafthouse’s “Don’t Talk” PSAs have frequently received national attention, and have featured former Texas Governor Ann Richards, Jeff Goldblum and a velociraptor, Georgie from “IT”, “The Room” director and star Tommy Wiseau, and one very angry voicemail.